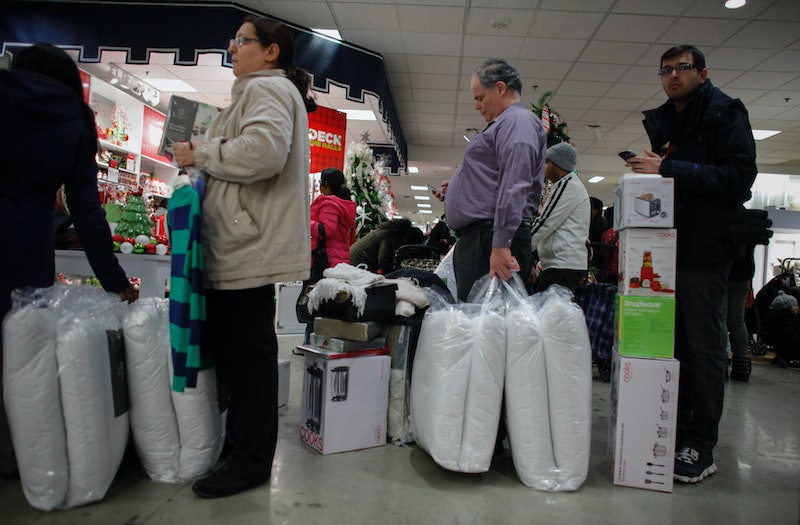 Love it or hate it, Black Friday is completely inevitable. Of course, most of the time the only thing truly scary about Black Friday is the prospect of having to wake up so unbelievably early the day after Thanksgiving, but occasionally you hear a few Black Friday horror stories that make you wonder about the lengths people will go to in order to score a good deal.

I participated in Black Friday shopping once. And, while it was an exhilarating experience, it's probably not something I would do again. I mean, I love saving money just as much as the next person. But, not when it means waiting in an endless line outside of a store in the middle of the night, and elbowing people out of the way just to get my hands on a box set of Sex and the City.

But still, year after year, thousands and thousands of people head out and do just that in order to score some discounts. Unfortunately, it doesn't always go as planned. As you might expect, cramming that many money-motivated people into one store can sometimes become a recipe for disaster. So, here are a few past Black Friday wild stories and incidents. At the very least, it will inspire all of us to be a little more careful!

Nobody likes a line hopper. So, when a man tried to cut in line while shopping at a Sears in San Antonio, Texas in 2012, another shopper obviously took issue with it. According to local news outlet My San Antonio, the line jumper decided his best reaction was to punch the opposing shopper square in the face. That man then reportedly retaliated by pulling out a handgun, which he later said was a move of self defense. Obviously, this unexpected move sent the line jumper fleeing. It turns out that the gun owner was well within his rights, as he had a concealed carry permit. The craziest part of the entire story? Shopping resumed just 10 minutes after the incident occurred.

You hear plenty of stories about Black Friday stampedes — they're pretty much a trademark of the shopping event. But, it'll take a lot to top this rushing mob at an Urban Outfitters at Thousand Oaks Mall in California. The video footage is absolute insanity. It sort of reminds me of that scene in Titanic where they're trapped behind the gate as it's filling with water. But this is no movie — just pure madness. Luckily, no one was hurt.

This Reddit user's experience as a retail worker on Black Friday is pretty self-explanatory. But, there's really no explanation for a man who thinks he can walk out with a big screen TV for $20. On the bright side, at least he was willing to pay something for it.

After standing in line for five hours to buy his grandson a stereo, a 62-year-old man was understandably frustrated when the store was sold out. So, he took his car to the next closest store in hopes that it would still have the item in stock. But as the Knoxville News Sentinel reported, the man thought that the driver in front of him on the road was going far too slow for his taste. He reportedly began tailgating and driving erratically, then pulled alongside the car, pulled out a handgun, and allegedly fired a shot at the driver to make her go faster. However, the woman he shot at was being followed by her husband in a separate car — who also happened to be an off-duty sergeant. He was able to pull the man over and arrest him for his wild behavior.

Handguns aren't the only types of weapons that become involved during Black Friday fights. Three women were allegedly fighting over something at Philadelphia's Franklin Mills Mall, Metro reported, when apparently things got ugly, and one of the women reportedly attacked another with a stun gun. There was no report on what specifically the women were fighting over, but it must've been good.

There's nothing like a good, ol' fashioned Black Friday brawl. At a Kohl's in Tustin, California, five shoppers reportedly got into a tussle for unknown reasons just after 1 a.m. As reported by ABC Eyewitness News, when the officers arrived at the store, they reportedly found two female shoppers with cuts on their faces. One of the assailants was found in the store, and the other two fled and were found later. All three female shoppers were taken into custody, where one was booked, one was released pending further investigations, and the other — a minor, of course — was released to her parents with charges to be requested later.

Obviously, it's important to remember that these are all extreme cases that happened over the course of several years. For every recount of a terrible Black Friday experience that you hear, there are thousands of other shoppers who had a great time and scored some major deals.

So, don't let these wild stories completely discourage you from heading out there and getting a jump start on your holiday shopping. Many popular retailers learn from every Black Friday, and then take that knowledge to improve security.

Popular stores that expect large traffic plan crowd management months in advance, and usually provide extensive training for employees to deal with the Black Friday madness. Some places have announced additional security precautions this year, including more visible police and security presence, while other stores are going so far as to put barriers at checkout lines and store entrances, and employ off-duty police officers to help out. Retailers want you to have a great experience, so they do what it takes to keep things under control.

If nothing else, do your best to keep yourself safe. Have a plan, stay alert and aware, don't bring small children with you, and always be friendly to the store employees. And, honestly, just avoid getting into any fistfights or screaming matches. Remember, there's very little you can buy in a store that's actually worth fighting over.