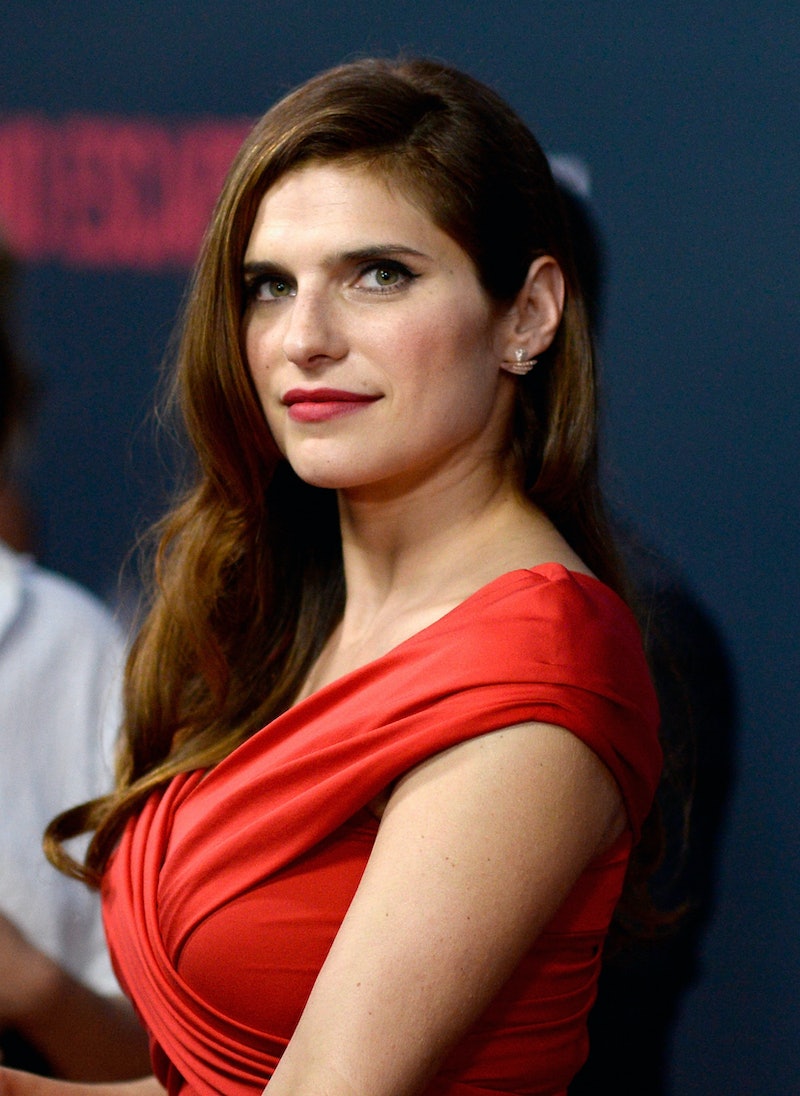 "Trying to be a great wife, and also a great mom, and a great content creator, and filmmaker, and actor is a tall order," Lake Bell, star of the new film Man Up , tells Bustle. "And I think the only way to do it without driving yourself insane is to go easy on yourself." The actress has the experience to back this up; the past few years of her life have been a whirlwind of creative projects, motherhood (her daughter, Nova, was born in October 2014), and publicity appearances. The thriller No Escape, in which Bell starred opposite Owen Wilson, premiered in August and hits DVD/On Demand Nov. 24; Man Up , a comedy co-starring Simon Pegg, came to theaters Nov. 13. In other words, Bell's life is crazy busy.

But to say she "has it all," or use whatever term typically given to women who (gasp!) both work and parent, isn't exactly right; according to the 36-year-old actress herself, her success comes with a sacrifice.

"There’s only 100% that you have, so that means you have to divvy that up; you can’t be 100% in all arenas at all time," Bell says. "So — and this is how I manage it — you can accept that, 'All right, today I'm going to be 80% an amazing writer, and 20% an amazing wife.' Or, 'I'm going to be 90% a mom, and 10% a workhorse.' You have to constantly shift percentages, and that's the only way I think that you can honestly and authentically move forward without driving yourself mad. Because there's no such thing as 400%."

The struggle for work-life balance is something Bell recently explored in a behind-the-scenes video for More magazine, in which, she recalls, "I hit the streets to talk to working moms, because it's a genuine conversation for me and I'm genuinely curious. I literally was walking down the street and I asked women how they do it." As for the experiment's results? "It's f***ing beautiful," Bell says. "It was so nice to make it into the camaraderie of that plight. Because I think at the end of the day, the answer is, you can't do it all."

That being said, the actress is a proponent of gunning for what you want and applying yourself fully to get it. She recalls how, while filming Man Up, she wanted to feel comfortable enough with her character's English accent that she would be able to go off-script if Simon Pegg wanted to improvise. Says Bell, "I worked with a dialect coach [named] Jill McCullough who's also a dialect nerd. We just nerded out for months ahead of time before I event started shooting— and while I was still in Thailand [shooting No Escape], for Christ's sake — and then when I landed in London, from that point on I was like, 'I will not drop this accent until I'm done shooting.'"

Bell stayed true to her word, sticking with the accent until she was back on U.S. soil. But it was a labor of love, as are all of her undertakings. "The only way great things are created is from the heart," she says.

Based on the fact that she just helped bring two movies and a child to life, it looks like the actress is taking her own advice.