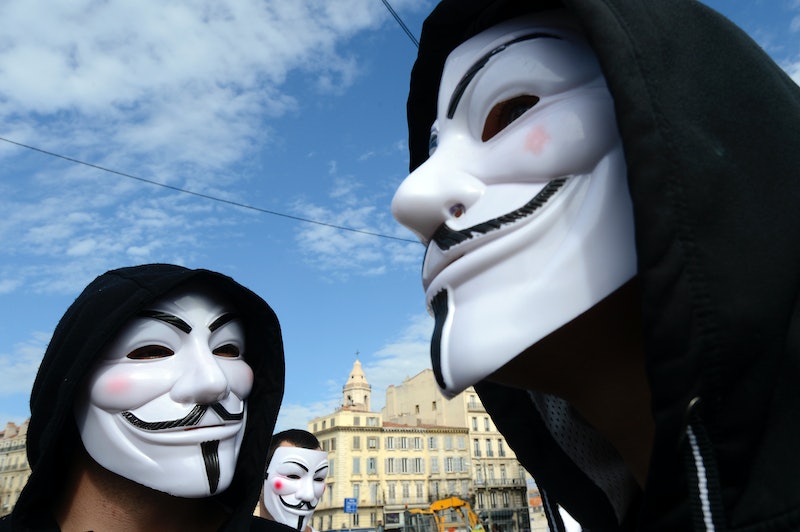 On Sunday night, in the wake of the horrific Paris attacks, Anonymous declared war on ISIS, vowing to launch a massive cyber attack on the terror organization. Given its similar past missions, this will likely result in the shutting down of thousands of ISIS-affiliated Twitter accounts. While this is certainly helpful in impeding the group's propaganda and recruitment efforts, it won't halt its operations. ISIS affiliates have mocked Anonymous' seemingly limited capabilities, but perhaps they should be careful who they needle. A closer look at the hacktivist group suggests that they could do much damage to ISIS, far beyond hacking into their Twitter. Here's hoping they will.

Expect massive cyber attacks. War is declared. Get prepared. Anonymous from all over the world will hunt you down. You should know that we will find you and we will not let you go. We will launch the biggest operation ever against you.

In response to this message, an alleged ISIS-affiliated account on the messaging app Telegram is instructing followers how to avoid being hacked, while simultaneously mocking Anonymous:

The #Anonymous hackers threatened in new video release that they will carry out a major hack operation on the Islamic state (idiots). What they gonna hack[?] All what they can do is hacking [Ansar] twitter accounts, emails, etc.

"Ansar" is an Islamic term for "helpers," used in reference to some ISIS followers.

Anonymous should not take this jeering lying down. Hopefully, as I type this, the group is planning a strategic, multi-pronged cyber war that will be an effective counterpart to the U.S.-led coalition's military campaign. That is, of course, if world governments are willing to put their longstanding loathing of Anonymous aside and work with them, because together they have a much higher chance of crippling and ultimately destroying ISIS. Here's what Anonymous could do (and might be attempting as we speak, because surely, they're miles ahead of me).

Taking down ISIS's Twitter accounts may interrupt its propaganda circulation and hinder its recruitment process, but only until the terror group sets up more accounts. Anonymous could go one step further. It could reach out to the same vulnerable, disillusioned youth that ISIS targets for radicalization, and reverse the message. If they get to them before the terrorists do, they could potentially instill in them an entirely different sense of purpose, and prevent a future in jihad. Sure, these young people might end up in the Anonymous army, but that's indisputably better than ending up in ISIS.

As it's proven time and again, Anonymous has the capability to access private networks to retrieve sensitive information. In 2011, Anonymous hacked intelligence agency Stratfor Global Intelligence and stole millions of emails. Imagine the kind of information the group could access if it were to hack into the right ISIS channels — operations plans, the locations of senior officials, the identities of countless members. The only caveat is that rather than leak this information themselves or to WikiLeaks, they'll have to go against everything they stand for and hand it over to the government.

A "distributed denial-of-service" attack happens when a computer system is flooded with so much data that it shuts down. It's safe to assume that ISIS operates from a nebulous network of computer systems. But believe it or not, they do have several office-like posts, from a sophisticated media department to a 24-hour jihadi help desk. These centers likely rely on their own computer systems, which means that Anonymous can launch DDoS attacks on them and shut their operations down — at least, temporarily.

Cause A Power Outage

In 2012, The Wall Street Journal reported of National Security Agency Director General Keith Alexander's warning that Anonymous could potentially cause a massive power outage in the next year or two. Three years later, Anonymous could very well have that capability. But instead of aiming it at credit card companies and e-commerce sites, like it was doing then, it can now target ISIS. A rolling blackout would certainly come in handy during a special ops mission. Perhaps right before SEAL Team Six strikes?

It's not exactly fair to say that trolling is what Anonymous does best, since they've proven to wield real power. But let's just say that the group can troll with their eyes closed. So as the international coalition continues to wage airstrikes against the terror organization, Anonymous can continue to light small fires under ISIS's ass by harassing members online and manipulating their social media accounts. Remember when Anonymous advertised a line of ISIS thongs? That kind of prank might not thwart a terrorist attack, but altering the militant group's image, and deflating their morale is an integral step in weakening its global influence.