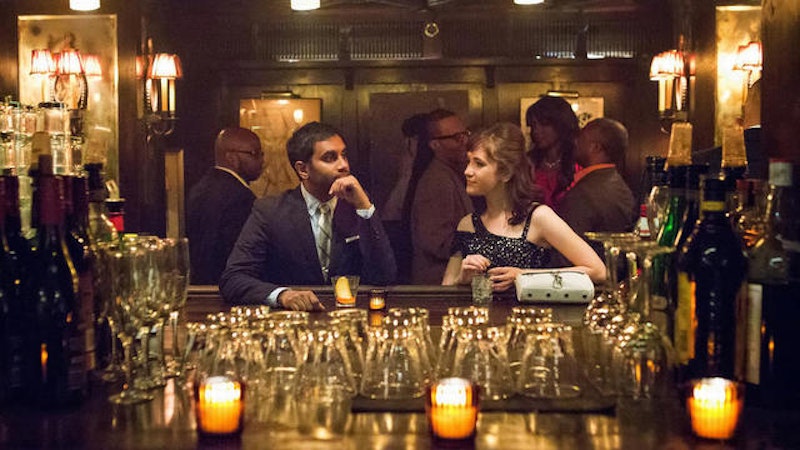 For years, some of the best TV shows have centered on the male antihero. The Don Drapers of the world, who aren't good guys, but aren't so terrible that you can't find something to like about them. It's safe to say that Draper and his antihero buddies like The Soprano's mob boss Tony Soprano and Breaking Bad's chemistry teacher turned drug lord Walter White were human, but not the best kind. With Aziz Ansari's new Netflix series Master Of None , the comedian seems to be moving away from this over-used archetype, in lieu of a man who's definitely not perfect, but is trying his best. Finally, giving rise to the notion that nice guys on TV don't always have to finish last.

On Master of None, Ansari plays Dev, a 30-year-old struggling actor in New York City, who is trying to deal with everything life throws him. He's trying to find someone he can connect with, not just hook up with, in the age of Tinder. A topic that is close to Ansari's heart, since he wrote the book on it, Modern Romance , earlier this year. He's trying to get to know his parents as actual adults, even setting up a dinner to thank and get to know them, which accounts for one of the best episodes of the show. Dev is also trying to figure out how to be an Indian-American actor without having to do offensive accents. There are stumbles along the way, but there's also some learning. Everything's a teachable moment, which could be heavy-handed if Ansari didn't have such a light touch.

Ansari's not trying to ram it down your throat that this character is an enlightened male, because Dev's not. He's just understanding, which he shows you in every episode. Usually, with a joke. In the show's first episode, Dev is having sex with a woman when the condom breaks. The two end up going to the drugstore to buy the Plan B pill, and, being the gentleman he is (or just not a douche bag), Dev pays. The moment is funny and endearing, and, basically, if that situation has to happen, this is the best way for it to go down.

With Dev, Ansari has created an actual everyman. A real example of modern manhood, or at least what modern manhood should strive to be. Dev is just a regular guy living in an actual world. His New York looks like New York with men and women of every age and color. There are no stereotypes or caricatures; it's just a lot of people trying to figure things out. Dev is no more special than anyone else; he just happens to be the leading man. And not a typical one. He's not some big movie star; he's a commercial actor trying to break into movies. He's not some ladies man, but actually seems interested in what women are also experiencing in this crazy world. He's a thoughtful person who doesn't purposely do bad things. He's just a good guy.

Obviously, the good guy has always been on TV (we wouldn't be able to have love triangles without them), but he's often relegated to the background and then largely forgotten. Vulture recently defended TV's good guys, mentioning Noel Crane on Felicity and Aiden on Sex and the City for being too good to be true — even by TV standards. There's definitely a pattern with each of these guys though: While they are first appreciated for their kindness and the fact that they're not like the other guys, ultimately that same kindness is what becomes their downfall. They're often walked all over and left to pick up the pieces on their own while their opposite, the "bad boy," gets the glory. Even worse, often the Logan Echollses and the Spikes get the glory for becoming the person the Noel Cranes and Aidens of the world were all along: good guys, once redeemed from their bad boy ways.

Dev's not the bad boy, or even the cool guy. He doesn't always get the girl, and that's OK, because there's other things going on in his life. He's in control of the situation. He's not being strung along, but is instead figuring out how to move on — not only in dating, but his career too. Like most millennials, Dev's just trying to figure himself out. He's the guy you root for, not because he's the protagonist, but because he's trying his best. And isn't that what we're all doing? Dev's on a journey of self-discovery. He doesn't want to keep failing. He actually wants to get things right, which is rare on TV these days. Dev could have taught Don Draper a thing or two about being human.