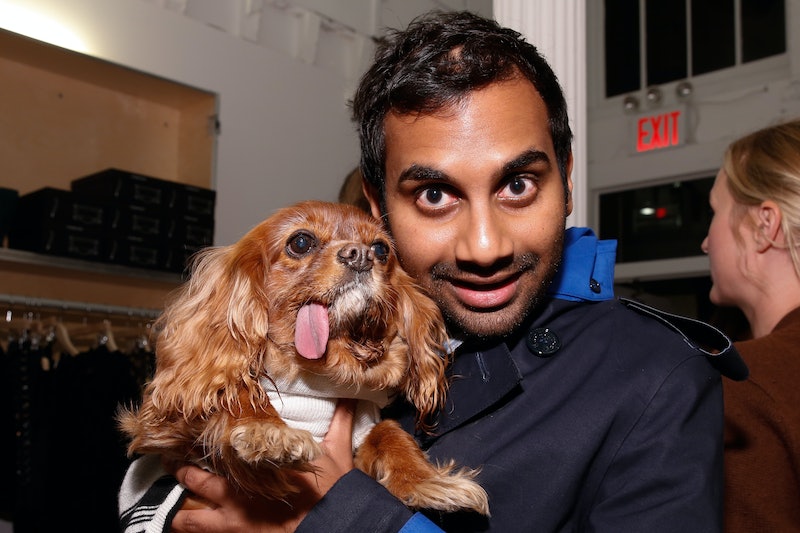 How has digital technology changed the way we date? Short answer: A LOT. So much so that Aziz Ansari — yes that Aziz Ansart — decided to write rigorous book full of statistics and interesting facts about dating to prove it. And it's kind of great.

Modern Romance is a "comprehensive, in-depth sociological investigation" examining "the many challenges of looking for love in the digital age. Ansari partnered up with Eric Klinenberg, a professor of sociology at New York University, to design and conduct "a massive research project, one that would require more than a year of investigation in cities across the world and involve some of the leading experts on love and romance." After conducting interviews and focus groups with hundreds of people in seven cities, Ansari and Klinenberg have written a very smart, wide-ranging, and, maybe most importantly, hilarious book on the current state of dating and love.

Modern Romance includes almost everything you need to navigate the weird world of online dating, from tips on how to send the perfect first text message to lots of graphs and charts from real social science studies to help you understand what, exactly, you're dealing with when you try to find a soulmate online.

Here are 13 facts from Ansari's Modern Romance to help you become a better online dater and understand what's going on with single people these days:

Marrying Your "Childhood Sweetheart" Used to Be the Norm

In 1932, a sociologist at the University of Pennsylvania "looked through five thousand consecutive marriage licenses on file for people who lived in the city of Philadelphia. Whoa: One-third of the couples who got married had lived within a five-block radius of each other before they got married." A whopping 12.64 percent of couple had lived at the same address. It totally wasn't weird to marry that kid you went to middle school with, but part of that is because...

The Average Age of Marriage Is Going Up

You Have a Real Self and a Phone Self

"In 2014 the average American spent 444 minutes per day — nearly 7.5 hours — in front of a screen, be it a smartphone, tablet, television, or personal computer." And according to Ansari, "we're spending so much time with our digital devices because we've all developed our own personal 'phone worlds'" and accompanying phone selves who live in this private space.

Men Still Do the Bulk of the Asking Out

In a somewhat shocking statistic, it's still pretty uncommon for a woman to ask a dude out on a date. "In 2012 only 12 percent of American women had asked anyone out in the previous year." Ovary up, ladies, and ask those dudes out on dates!

More People Are Being Asked Out By Text...

A 2013 study done by Match.com found that 23 percent of people under the age of 30 would call someone to ask them out, and 32 percent would send a text message. (Compare this to the responses from people over thirty. 52 percent of that group would call, and only 8 percent would text.) Since so much of our life is lived staring at a screen, it makes sense that texts would be more common than phone calls these days.

"According to a 2014 survey of 2,712 eighteen-to thirty-year-olds who'd had a relationship end during the previous year, 56 percent said they had broken up using digital media," which means a minority of people broke up with their partner face-to-face. Texting was by far the most popular method for breaking up.

...and Even Asked to Prom by Text!

Most Millennials Do Some Pre-Date Googling

Try 80 percent of Millennials, according to one 2011 survey. "And why not?" asks Ansari. "With our expanded dating pools, we're meeting people we hardly know, including total strangers with no existing social ties to us. Fortunately, the same technology that allows us to connect with them also helps us figure out whether they post cute pictures of baby elephants or something more malicious, like a blog chronicling their latest elephant-poaching expedition in Botswana."

You Don't Have to Lie About Meeting Someone Online...

There's no need to feel ashamed about meeting your significant other online because you're far from alone. Ansari learned that "[B]etween 2005 and 2012 more than one third of couples who got married in the United States met through an online dating site. Online dating was the single biggest way people met their spouses. Bigger than work, friends, and school combined."

Especially if You're In a Same-Sex Relationship

Nearly 70 percent of LGBT couples meet online these days, and there's a pretty compelling reason why. "The smaller the pool of potential romantic partners, the lower the odds of finding romance face-to-face, whether through friends, in schools, or in public places. Sure, there are booming gay neighborhoods in some cities, but the people who live and hang out there see a lot of one another." If you want to expand your same-sex dating pool, chances are you'll be looking online.

According to data from OkCupid, it turns out that "writing a standard message and then copying and pasting it to initiate conversations is 75 percent as effective as writing something more original." It's way less effort than writing a personalized message every time, but three-quarters as effective, which is a pretty good trade-off if you're messaging everyone.

You're not a weirdo for doing it. "One study found that 88 percent of those who continued to have access to their ex's Facebook page said they sometimes monitored their ex's activities, while 70 percent of people who had disconnected from an ex admitted to trying to spy on the ex's page by other means, such as through a friend's account." If anything, your ex is probably spying on you, too.

Nothing Beats Going On a Date in Real Life

OK, so this might not be a "fact," but it's something Ansari really stresses throughout Modern Romance: "With all our new tools for connecting and communicating, there's still nothing more useful than actually spending time with a person face-to-face." So once you meet someone online, meet them in real life. That's the only way this whole "online dating" thing is going to work.