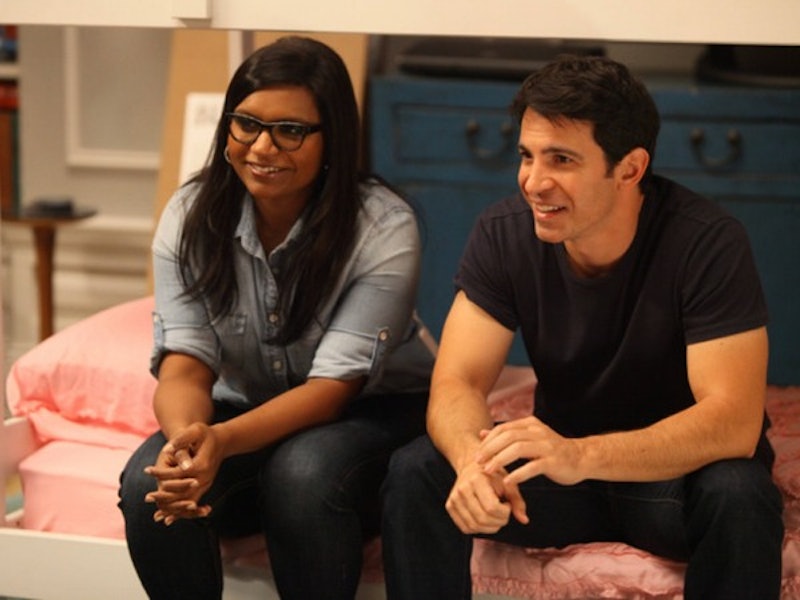 If this is a prank, I'm going to be so mad at you Mindy Kaling. On "The Departed," the long-awaited return of Danny Castellano has occurred. Sort of. Well, we don't know yet, but sue me for being naive and hopeful. After three long months of Danny traveling to California to care for his father, the question on everyone's mind was when Danny (and Chris Messina) would return to The Mindy Project . So, when I heard "Fat Bottomed Girls" playing in the hallway of Danny's apartment building, I was not only excited because it was the song I wrote down as my favorite song in my 6th grade yearbook (I was unique), but also because it meant that Diamond Dan was back.

The caveat is as follows: we don't actually know if Danny is back. There could be some weird random Queen-fanatic — who puts "Fat Bottomed Girls" down as their favorite song in a children's yearbook — roaming the halls of Danny and Mindy's apartment, and we might all be back to square one at the beginning of next week's episode. But, if Danny is back, then we need to celebrate, because it's been quite a few weeks of Mindy sans Danny, and while Kaling can hold a show herself, there's a bit of magic* missing without Danny's presence.

* This is the magic that is missing.

My main worry is where Danny and Mindy go from here. Assuming Danny is back, that will be three months he left his partner and newborn. While I understand that different relationships work in different ways, at the end of the episode, even Mindy was feeling the distance constraints on their relationship and lives. Before Danny's ringtone went off in the hallway outside the apartment, it seemed as if Mindy was going to call Danny and talk to him about returning home.

Even though Danny was caring for his father who had suffered a heart attack, I can't help but wonder if Mindy is going to hold some animosity toward Danny for leaving. Not only was Danny gone for three months (which is a very long time), but he told Mindy — OVER TEXT MESSAGE — that he was thinking he'd be staying until Christmas. That's three holiday-shaped peanut butter cup designs away from the current moment, and that is not OK.

While I'd like nothing more than to see Danny and Mindy strike a successful working parent relationship upon his return, I worry that maybe stormy seas are ahead. I've been wondering, now that Danny and Mindy are together, what the show was going to rest on, since every new episode couldn't be about them disagreeing on something small, only to figure it out at the end of the half hour. Could Danny's return be the introduction to greater problems for Danny and Mindy? Let's find out if it's even Danny on the other side of the door, first.