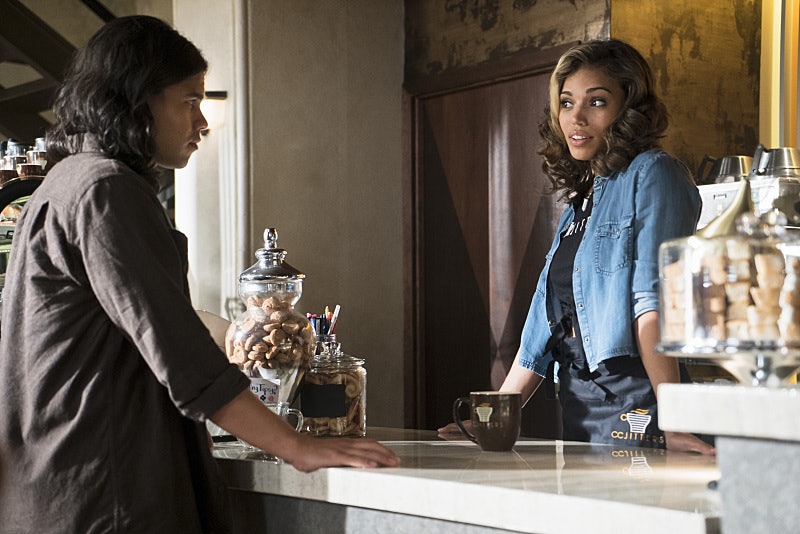 While the DC heroine Hawkgirl is set to be one of the stars of the upcoming CW spinoff DC's Legends of Tomorrow, we have already seen her alter-ego multiple times on The Flash. With so many other Legends getting their start on the current seasons of the two existing CW series, it stands to reason that she will be next. When and how will Kendra Saunders become Hawkgirl on The Flash ?

Technically, (imagine me pushing glasses up my nose to emphasize this point) Kendra already is Hawkgirl, she just doesn't know it at the moment. Part of this character's mythology is that Hawkgirl is reincarnated, but doesn't always retain memories of those past lives. It's up to her counterpart Hawkman to re-orient her in each new setting. However, so far we have only seen Kendra Saunders on The Flash as a a Jitters barista who is new to Central City and gave Cisco her number.

According to CW press releases, we will officially meet Hawkgirl and Hawkman in the upcoming The Flash/Arrow crossover event titled "Legends of Today" and "Legends of Yesterday," respectively. In the Flash portion of the week, "Vandal Savage arrives in Central City and sets his sights on Kendra Saunders. After Vandal attacks Kendra and Cisco, they turn to Barry for help. Realizing how dangerous Vandal is, Barry takes Kendra to Star City and asks Oliver and team to hide her until he can figure out how to stop Vandal. However, things quickly go from bad to worse when a man with wings AKA Hawkman shows up and flies off with Kendra." Then, on Arrow, "Oliver and Barry Allen take Kendra Saunders and Carter Hall to a remote location to keep them hidden from Vandal Savage while they figure out how to defeat him."

These episodes will air on Dec. 1 and 2, so get pumped. DC's Legends of Tomorrow will premiere at midseason, so this should lead right into the new series. Hawkgirl does not have the most traditional origin story. In this interview with CTV, actress Ciara Renée explained how Kendra will discover her own powers and identity over the course of all three shows.

I don't think the transformation from Kendra to Hawkgirl is going to be as dramatic as Sara Lance's trip to the Lazarus Pit that resulted in the birth of the White Canary on Arrow, a linking device like Firestorm on The Flash, or even Ray Palmer's disappearance as the tiny version of himself in the Atom suit. This is going to be about a girl coming into powers that she already has and has had for a long time, which should add a fun new dynamic to the CW franchise.