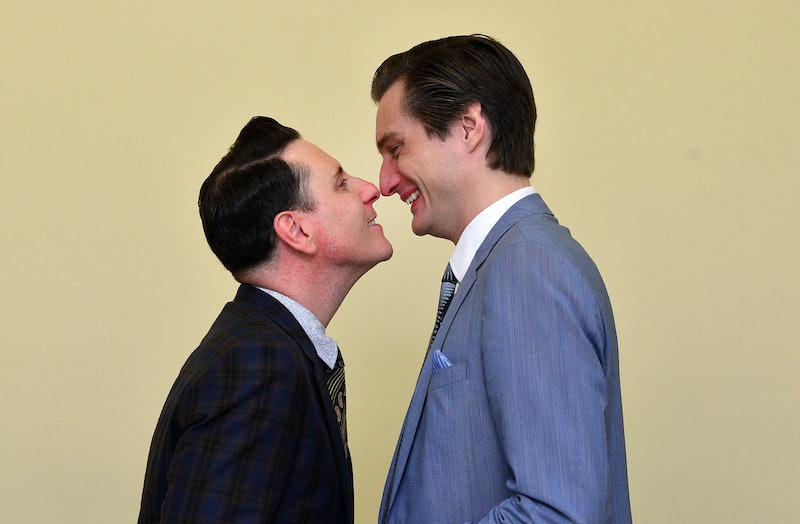 On Tuesday, a full six months after the Irish public voted to legalize same-sex marriage in a nationwide referendum, the big moment has finally arrived. Ireland's first same-sex marriage happened Tuesday, and that's cause for celebration. When the referendum passed, it called for a half-year's wait before taking effect — a glint of disappointment within otherwise terrific news. But now it's official: Same-sex marriage is a reality in Ireland.

The first couple to tie the knot were reportedly 35-year-olds Richard Dowling and Cormac Gollogly, who were wed in the town of Clonmel. They'd been together for 12 years prior to the big day — a wait which must've made the moment that much more impactful.

It doesn't hurt that they're such a photogenic pair, either. if you were casting the first same-sex spouses in a country that's about to have thousands more, you could do a lot worse than these two. The photos that were snapped of their historic union are downright adorable. And really, they're a testament to how far the political reality in Ireland has come. It shouldn't be forgotten that while other countries have granted marriage rights to LGBT citizens, Ireland was the first to do so by popular vote. It's a very meaningful distinction.

Dowling told the Irish Times that finally getting married to Gollogly would allow him to relax and settle in for the rest of their lives together:

We are really delighted to be able to do it. Having a full marriage was important to us so now we can relax and get old together.

Ireland is now one of 13 European nations that boast legal same-sex marriage, alongside Denmark, Sweden, Britain, Belgium, Finland, Iceland, France, Sweden, Portugal, Spain, the Netherlands, and Luxembourg. That accounts for more than half of all marriage equality nations worldwide. At present, only 21 countries allow same-sex marriages — although obviously, there's a difference in impact between the United States legalizing the practice versus, say, Luxembourg (home to around 500,000 citizens). Ireland, for its part, has a population of just over six million.

If you'd like to see video of Gollogly and Dowling exchanging their vows, you can check it out over at the Irish Times. The underlying love and fulfillment comes across loud and clear. Congratulations to them, and to all the other Irish couples who'll be following suit in the days and weeks to come.