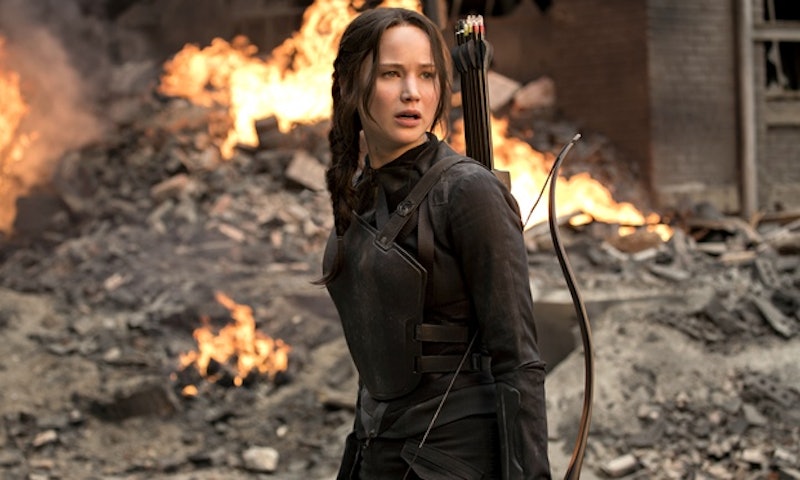 With the premiere of Mockingjay, Part 2, the final installment in The Hunger Games franchise, hitting theaters this weekend, film studios are no doubt on the prowl for the next big hit. Mockingjay, Part 1 made major bucks, so studios would no doubt love to continue that trend. The first place to look for the next Hunger Games ? The YA bookshelves. For years, young adult literature has led to huge on-screen franchises, starting, most memorably, with Harry Potter. Then, a few years after Harry and Hogwarts became huge, a series about a girl in love with a vampire ignited the supernatural romance young adult book scene. Twilight and its sequels went on to earn millions and created a rabid fan base, and the film adaptations became some of the highest grossing movies ever; even today, the money will keep rolling in thanks to author Stephanie Meyer’s gender-swapped re-imaginization, Life and Death.

Once the tidal wave that was Twilight took hold, the next tsunami was born in Suzanne Collins’ The Hunger Games, which plays out in a dystopian future in which children are forced to fight to the death in full view of the public. The books have been bestsellers, and the film adaptations have been made millions, as well as stars out of their young casts. But The Hunger Games franchise has managed to branch out to a wider audience than the Twilight franchise ever did. While most of Twilight fans are young girls and women, The Hunger Games fan base also includes the male audience, much coveted by Hollywood penny counters (according to the New York Times, an impressive 41% of Catching Fire 's opening weekend audience was male). So what can studios, and audiences, count on next?

Well, possibly a lot more of the same. Hollywood hasn’t stopped looking to dystopian or sci-fi YA novels for cinematic inspiration, and the rights to many other supernatural, dystopian, or science fiction YA novels have been bought by studios over the years. But while the Divergent franchise, for instance, based on the novels by Veronica Roth and starring Shailene Woodley in a dystopian future, has certainly been successful, it hasn’t received that same praise, nor the same box office numbers, that The Hunger Games has. Other adaptations of series have fallen flat after one movie, as has been the case with Mortal Instruments, Beautiful Creatures, and I Am Number Four. The Matched series by Allie Condy was nabbed by Disney before the first in the trilogy was even published, but production has been at a standstill for years.

And as for the similar book-to-movie adaptations in the works? It's too early to tell. Sony’s upcoming The 5th Wave, based on Rick Yancey’s novels, seems to be the only YA adaptation that’s complete. The film premieres in Jan. 2016 and takes the action back from the dystopian future and into an alien-invading present. But will it lead to franchise success, or flame out after only one film?

It's hard to say just yet. With successes rare, rights purchased but going nowhere, and audiences tiring of dystopian futures, where’s Hollywood to look for its next big hit (aside from, you know, maybe writing original material)? According to contemporary Young Adult author and editor Jessica Verdi, there's no an obvious answer. “Series in general aren’t as big as they were,” she says. “Publishers are looking for stand-alones or two-book series, rather than trilogies.” She adds that John Green’s The Fault in Our Stars changed a lot about demand, saying, “Fantasy trilogies aren't where it's at anymore. The Fault in Our Stars was such an anomaly, and crossed over into every audience, and was such a success, that people started wanting more books like that. The trend has shifted to contemporary standalone books.”

If Hollywood continues to look for source material in YA literature, they’re going to have to change their tune, but in fact, studios might already be on the way to doing so. Some contemporary stand-alone adaptations are already in the pipeline. Julie Murphy’s Dumplin’ is in the works at Disney, and Fox has plans to adapt Becky Albertalli’s coming-of-age novel Simon Vs. The Homo Sapiens Agenda . But will these get lost in the assembly line like so many of those supernatural or dystopian series? Verdi, for one, think so.

“Seven or eight years ago, vampires were massive,” Verdi says. “Then people had enough. Then dystopian series were everywhere, and eventually people got bored with those too. So now we're in this contemporary/realistic standalone period... [but] that will change at some point too.”

So what’s next? Only time will tell. A new hit might not come from the world of YA at all. The next big thing might be something we don’t expect at all, a surprise series featuring not sparring teens, or lovestruck vampires, or even just your average high schoolers, but something entirely new — and it's going to be excited to see what comes along.