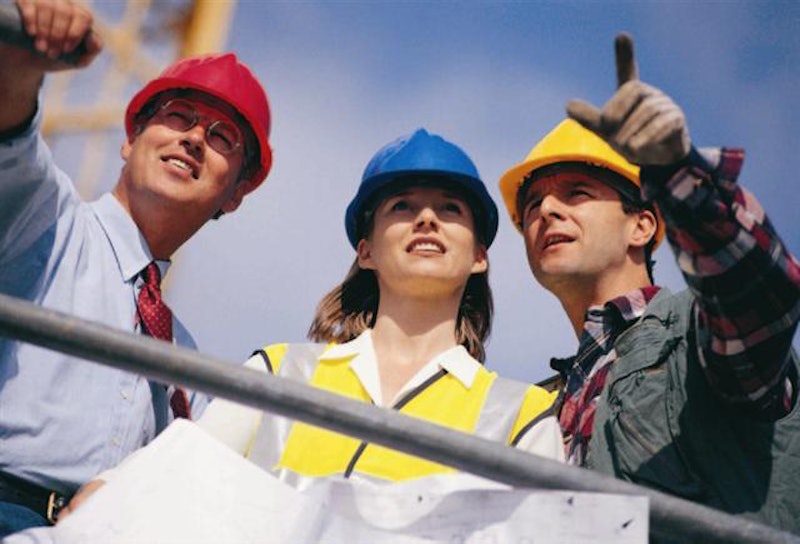 I write about sexism in the workplace quite often, and I write about it for one reason: In 2015, it is still — somehow — a huge problem. A recent survey conducted by The Huffington Post, YouGov, and MAKERS revealed the huge disparities that still exist in gender equality at work, proving once again that yes, sexism is still a problem we haven't solved. For this survey, they used 1,000 participants, using people from a wide variety of backgrounds in order to proportionally represent the United States population — and the results are not at all surprising. And it is because they aren't surprising that they are so important to talk about.

When it comes to how people felt most men viewed their female co-workers, 54 percent — a majority — felt that men do not consider women to be their equals in the office. Men seemed to also admit their own bias here, as 42 percent of them responded with this answer. However, as 65 percent of women said the same, resulting in a 23 percent gap between genders here. It sounds not dissimilar from the results of a recent study that found that men don't think gender bias in STEM is a thing: The women who experience such biases are told by men that they're wrong. If that isn't an example of the bias in action, I don't know what is.

When it comes to wages, 65 percent of respondents said that they believe men typically earn more than women do. 22 percent felt that men and women were paid the same, while a mere five percent said that women were typically paid more than men. Keeping with an emerging trend here, women were much more likely than men to believe that pay equity was an issue; only 15 percent of them said that men and women were paid equally, while twice the number of men (30 percent) said the same. I wonder how much more evidence we need of the gender pay gap before people will finally start to believe it's real, since at this point, there's a new study about it every other week — with all of them pointing to the same answer.

The moral of the story? People do acknowledge that there is sexism in the workplace, although it's much more likely for women to report this gender bias than it is for men to do so — and that right there is exactly why it needs to change. Since men are the ones in power, though, it's going to be tough to change things unless they're on board — or, you know, unless we're able to get more women in power. The same study, for example, found that most people think we'll have a female President in the next decade. How about we start working to make that actually happen?

Head on over to HuffPo to check out more of the results.