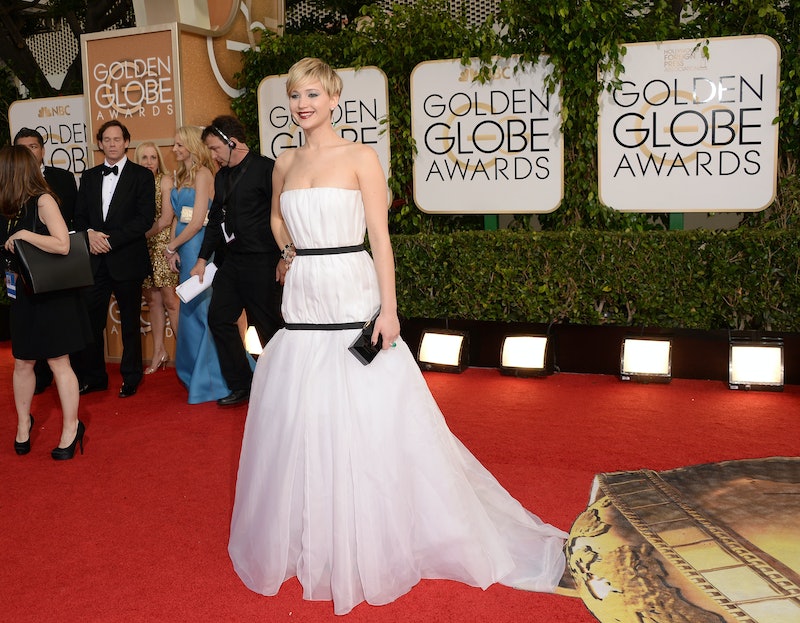 Fans and fashion critics alike waited with bated breath to see Jennifer Lawrence's Golden Globes gown. The photos are in, and reactions are a bit back and forth about the Hunger Games actress' sartorial choice. Lawrence's banded black and white strapless Dior gown is simple, unfussy, and to, some, a bit underwhelming.

The actress's decision to wear Dior is hardly unprecedented — nor unexpected. Not only did Lawrence star in Dior ads in 2013, but the couture label's classic-yet-updated designs are perfect for the actress's chic aesthetic. Her navy Dior gown from the 2013 SAG Awards was perfectly understated, and her strapless red gown from the label at the 2013 Golden Globes was certainly a showstopper. That's, of course, to say nothing of her dreamy, petal pink 2013 Oscars gown, which I basically just swooned aloud thinking about.

With such a stunning precedent set by her past red carpet choices, the actress seems to have taken the easy road this year by choosing such a restrained gown. However, Lawrence's brilliant jewelry more than makes up for the gown's simplicity. With two intricate diamond bracelets (one of which she nearly lost during a red carpet interview with E!) on her wrist and delicate green drop earrings to accent her pixie haircut, Lawrence glittered on the red carpet.

Even in a dress on which we weren't instantly sold, still, she can't do anything to pull us away from the magnetic force that is J-Law. And, after some thought, just in case you were wondering where she ended up on our best dressed list..