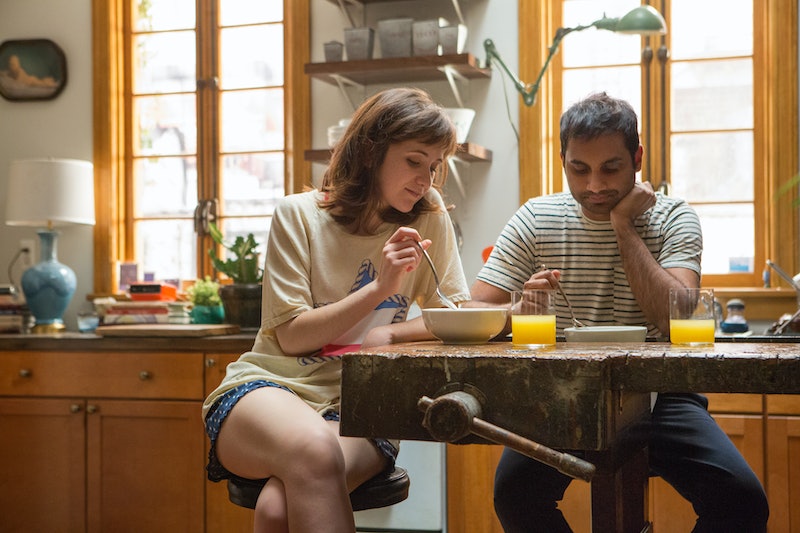 Being an only child can come with some very distinct advantages. Not only did you grow up being the center of attention, but you also possessed the Holy Grail of childhood dreams: your very own room. But like with most things in life, you never truly appreciate something until it's gone, which is exactly what happened when I made the decision to move in with my boyfriend over four years ago. Now, don't get me wrong, I love my boyfriend and don't regret the fact that we live together. However, that's not to say that there haven't been a few speed bumps along the way. So when Master of None decided to center an entire episode around Dev and Rachel living together, I found the entire journey of "Mornings" extremely relatable.

Take, for example, their different styles of "keeping house." While Dev preferred things to be on the tidy side, Rachel was totally comfortable leaving her clothes on any spare piece of floorboard she could find. It reminded me about how I too had to adjust to some of my boyfriend's least admirable quirks — like the fact that his toilet paper preference is under rather than over. (Seriously, who thinks that?!) But in the end, you learn to compromise and, at times, even come to love the traits that used to aggravate you to no end. Kinda like how when Rachel went away on business and Dev missed her messiness and the wasteful way she would squeeze out toothpaste. That's because you end up loving each other not in spite of your flaws, but because of them.

However, the comparisons went much deeper than the adjustments that come with living with someone. Otherwise it wouldn't really be all that different from just having a roommate. Which is why their fights, in particular, hit very close to home for me. It's the type of fighting that can only really evolve from being part of a couple. When Dev lashes out at Rachel and refers to the place as "his" apartment, Rachel automatically gets offended that he still thinks of it as his place rather than their place that they share together. I've had the same exact fight with my boyfriend on more than one occasion. Even if it was just a poor choice of words, it can lead to you interpreting certain things about your relationship. "So, what, do you think of me as just a temporary guest here? I thought we were a team!"

And making the sex go through various highs and lows was spot-on as well. When you're with someone for a long time, things can start to become routine in the bedroom if you let it. The sex isn't always going to be mind-blowing 24/7 like what you see on TV or in the movies. You need to work at it in order to keep things interesting (which can be a whole lot of fun in and of itself). But just because you might be going through a slump doesn't automatically mean your relationship is doomed or not strong enough to last. Of course, these two ended up going their separate ways, so it's not always a guarantee either. But that had more to do with the fact that they ended up wanting different things out of life, not because they sometimes chose to go to bed rather than have earth-shattering sex or because Dev waited too long to open that pasta maker. The love was real and their time together was special — imperfections and all.

I guess what I'm just trying to say here is that it was nice to see a couple represented in such a realistic type way, especially in regards to living together. Sometimes it can be the best thing ever. Sometimes you may feel as though you want to kill them. But whether it works out in the end or not, it's a journey that you'll be thankful you went on all the same, toilet paper preferences be damned.