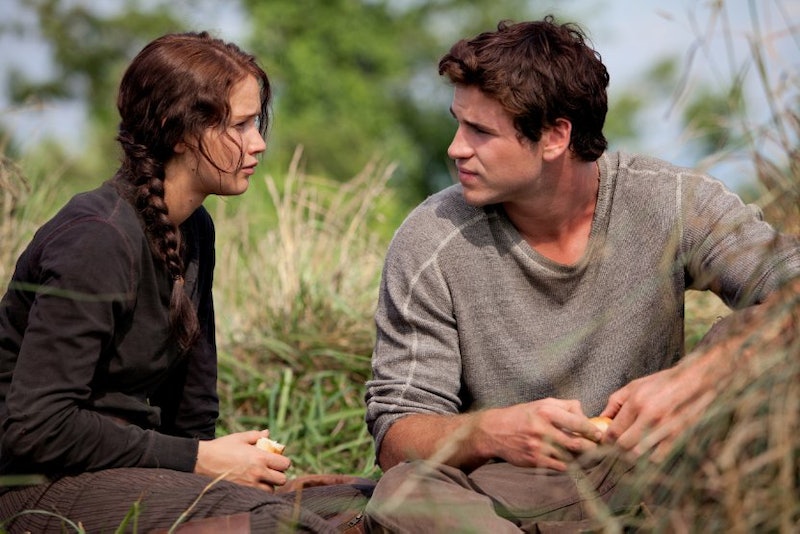 Hunger Games devotees know that the series is one of the most eminently quotable to come out since Harry Potter. ("Of course it is happening inside your head, Harry, but why on Earth should that mean that it is not real?") It's inspired tattoos, spawned great soundtracks, and made stars of its leads, Jennifer Lawrence and Josh Hutcherson in particular. Though Suzanne Collins isn't personally responsible for the screenplays for the movies based on her books, her writing is strong and cinematic enough that the screenwriters adopt many excerpts of dialogue and narration, folding them into the script. Being the final movie, there's particular pressure on Mockingjay, Part 2 to make use of the source material and incorporate these Katniss quotes in Mockingjay, Part 2 .

Though she doesn't initially see herself as a unifying symbol — as the Mockingjay — Katniss herself is the voice of many of the most essential Mockingjay quotes. She becomes the face of the rebellion, and not by accident. Her every movement is surveyed and recorded by Cressida and her team to make later use as propaganda. These 13 quotes prove why Katniss is the hero that Panem deserves, and they're essential for Mockingjay, Part 2 to do justice to the series.

This one is actually a Peeta quote, but it's a conversation with Katniss that recurs throughout Mockingjay. He has to constantly reaffirm his grasp on reality, asking Katniss if his various memories are real or not. And at the book's close (spoiler alert!) he says, "You love me. Real or not real." And, of course, she responds, "Real."

"The Odds Are Never In Your Favor."

A play on the Hunger Games tagline "may the odds be ever in your favor," this Katniss is more mature, and more cynical.

"Something Is Significantly Wrong With A Creature That Sacrifices Its Children’s Lives To Settle Its Differences."

"Fire Burns Brighter In The Darkness."

Acting as a pawn in the Capitol's and District 13's plots takes its toll on Katniss, and the effect witnessing all the violence and trauma has had takes shape by the end of Mockingjay.

Immediately after Prim's death, Katniss experiences a moment with her sister's cat Buttercup — honestly, the whole scene should make the Mockingjay cut, as it's a marked turning point in how Katniss sees her role in the rebellion.

"There Are Much Worse Games To Play."

Could a screenwriter conceive a better closing line than this? Doubtful.

"I Can't Believe How Normal They've Made Me Look On The Outside When Inwardly I'm Such A Wasteland."

The powers of those mysterious Capitol makeup artists. They might be flamboyant, but they can sure put on a brave face.

"Nothing Has Changed. Nothing Will Ever Change Now."

When Katniss realizes that the new regime she's helped install will be just a slight diversion from the previous, she realizes she must right Panem once again.

"A Badly Burned Girl With No Wings. With No Fire. And No Sister."

Katniss narrates her hospitalization with acute psychic and physical pain — she explains the source of her pain with a poetic poignancy that the filmmakers would benefit from replicating in the new Mockingjay installment.

Replacing her little sister as the District 12 tribute, Katniss has given up everything for Prim — and then has to watch her die amid an explosion devised by her own people.

"Everything That Moves Is A Target."

It's taken as truth throughout the Hunger Games that no one is safe from the Capitol — and then from the rebellion.

This simple statement reveals Katniss's empathy and, even more, how deeply she cares for her sister. She thinks, "Let me die. Let me follow the others," when the parachute bombs go off and take her sister with them. Much of this scene plays out inside Katniss's head (other gems like "Real or not real? I am on fire" should also be adapted into dialogue), and the first-person narration poignantly reveals Katniss's inner life.

"We Are Both Fire Mutts Now."

Nothing is the same after the blast, but Katniss finds that Peeta is the only one who understands the constant agonizing burn.

Mockingjay, Part 2 is the gutting conclusion to a beloved series, and the fan base the books have accumulated put even more pressure on the filmmakers and actors to get it right. These 13 Katniss quotes will go a long way towards ensuring that the final book gets its fair treatment. May the odds be ever in your favor, Jennifer Lawrence.

More like this
Everything To Know About 'The Hunger Games' Prequel Movie
By Grace Wehniainen and Radhika Menon
Alyson Stoner Says She Went To Rehab After Auditioning For 'The Hunger Games'
By Jake Viswanath
At 14, Jenny Han Wrote Rom-Coms About Her Friends & Fan Mail To Leo DiCaprio
By Alyssa Lapid
The 'Spiderhead' Movie Ending Is Nothing Like The Short Story It’s Based On
By Morgan Leigh Davies
Get Even More From Bustle — Sign Up For The Newsletter