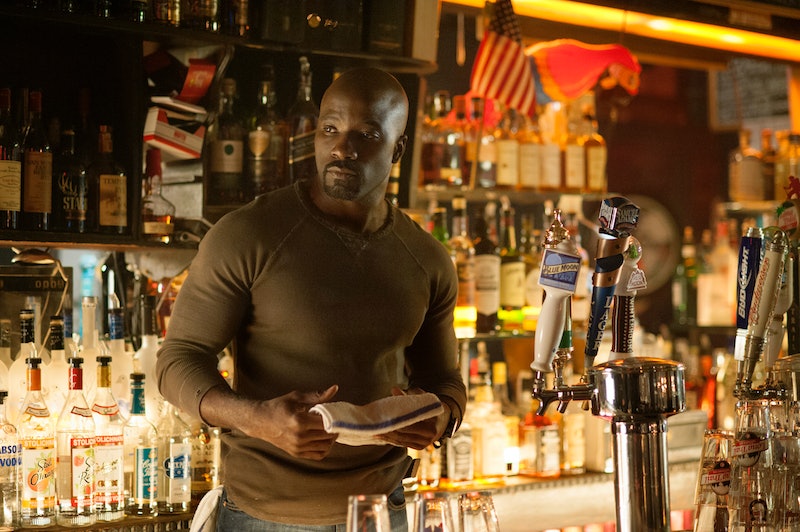 Marvel Television's highly anticipated follow-up to its first Netflix drama Daredevil lands on the streaming service on Nov 20. Jessica Jones stars Krysten Ritter as a private detective living in the same New York City as Nelson & Murdock, living from paycheck to paycheck and self-medicating with booze to survive the trauma inflicted by a controlling relationship with icy villain Kilgrave. In the first episode, Jessica boozes in Josie's, a dive bar familiar as a Daredevil watering hole and owned by Luke Cage, the star of Netflix's next Marvel series. She may be looking for just some flirting or even a one-night stand, but there should be more to the dynamic between Jessica Jones and Luke Cage, played by Mike Colter. The two series will certainly deviate from the Marvel history of the characters, but comic books may at least provide some clues to how their relationship might play out. So, do Luke Cage and Jessica Jones hook-up in the comics?

Jessica and Luke's physical chemistry in Netflix's Jessica Jones is actually pretty faithful to the comic canon. The two do have a drunken (at least on Jessica's part) one-night-stand, but it's not their first meeting. Instead, Luke and Jessica gradually become closer as Luke offers her tips on her cases, culminating in a night of passion. That's not where their comic arc ends though. The abrupt change in dynamic throws the sort-of friends into turmoil for a while, until they're paired up to play bodyguards to Matt Murdock, who's recently been revealed as the Devil of Hell's Kitchen. Luke confesses to having developed more serious feelings for Jessica after their hook-up, and later she tells him that the tryst actually resulted in a pregnancy.

I don't see Netflix going the route of giving Jessica a kid, especially with a series so young. But the progression of feelings may be similar. In the comics, Luke and Jessica trace a pretty conservative path in their relationship from that point on. They move in together, have a daughter named Danielle, and eventually get married. Jessica Jones doesn't feel like the kind of show that's moving towards a big, white wedding, even though Jessica and Luke both keep on kicking ass post-nuptials as members of the New Avengers.

According to Luke's Jessica Jones character description, he's "a man whose past has secrets that will dramatically alter Jessica in ways she could never have imagined." Vague though it is, the statement is probably referring to the evolution of his powers and also perhaps his criminal past. In the comics, when Luke undergoes a medical experiment as a convict, he develops superhuman strength and skin that functions like armor. Luke Cage will see the character return to his childhood home of Harlem to fight crime, though Colter told a roundtable at New York Comic-Con that he was sure to confirm that the characteristics the comics cribbed from Blaxploitation films would be swapped for a more well-rounded, 21st century kind of hero before he committed to the project, as reported by ComicBook.com.

With Luke Cage setting up superhero shop in a different part of New York City post-Jessica Jones Season 1, he and Jessica likely won't be achieving domestic bliss anytime soon. But if they ever do decide to go there, Marvel Comics has already laid out an interesting path for the heroic pair to follow.