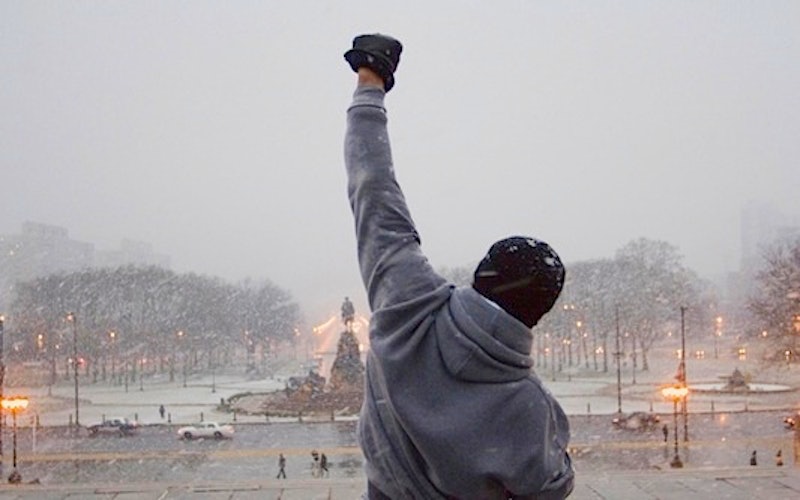 Sports movies rarely get the franchise treatment, and when they do they don't last long (still waiting for Mighty Ducks 4). But Rocky is the exception. With the release of Creed this month, the Rocky franchise adds a seventh movie to its lineup, which is already the most successful sports movie franchise in existence. The first Rocky was way back in 1976, almost 40 years ago, so there is a lot of history that went on between then and the events depicted in Creed. So for anyone who's not familiar, here's a Rocky recap before Creed that should get you all ready for the new movie.

Before I get into what came before, let me just give a little background. In the Rocky movies, Sylvester Stallone plays Rocky Balboa, a boxer from Philadelphia. He starts out as an underdog, becomes a champion, and in Creed is an old man training Adonis Creed (Michael B. Jordan), the son of his deceased friend, Apollo Creed. The movies together make up quite the journey of a life, and also coincide with Stallone's life. From his struggle as a young actor to get Rocky made (he wrote the screenplay, but wouldn't sell it unless he could star), to his huge celebrity status as an '80s action icon, to his current position of trying to remain relevant as a nearly-70-year-old actor in Hollywood, Stallone is Rocky in many ways. The actor wrote all of the Rocky movies with the exception of Creed, and directed four of them, so it's not difficult to see how he looked inward for inspiration.

I don't know what will happen to Rocky Balboa in Creed, but I know what happened to him in the past. Here's a rundown of the history of Rocky, to get you ready for Creed.

The first Rocky is often considered the greatest sports movie ever, and it even won the Oscar for Best Picture in 1977. The underdog tale tells the story of an amateur fighter who gets a shot at the world heavyweight championship, held by Apollo (Carl Weathers). Rocky trains with the help of the elderly and hard-nosed trainer Mickey (Burgess Meredith), his girlfriend Adrian (Talia Shire), and her brother Paulie (Burt Young). Even though Rocky loses the fight, he manages to defy the odds just by going the distance, and inspires all who see him.

The fighter's second outing sees him marry Adrian, have a baby with her, and take on Apollo in a rematch for the championship. The fight is Apollo's idea, eager to prove that his previous match against Rocky was a fluke. His plan backfires though as Rocky wins the fight, becoming the Heavyweight Champion of the World.

This is where the Rocky movies start to get silly, but boy are these middle movies fun. Four years of success have left Rocky soft, so when a new challenger arises in Clubber Lang (Mr. T), an arrogant and underprepared Rocky agrees to defend his title against him, against the advice of Mickey. Mickey suffers a heart attack before the fight, which further distracts Rocky, and he loses. Mickey dies immediately after the fight, and Apollo steps in to fill the void as Rocky's trainer to prepare him for a rematch against Lang. Rocky and Lang fight again, and Rocky wins. The film is also notable for introducing the Survivor song "Eye of the Tiger", which has been played at every high school basketball game since.

This movie is the height of insanity for Rocky movies, but it's also my personal favorite because it's so delightfully bonkers. The Soviet Union enters the world of professional boxing with their steroided-up superman, Ivan Drago (Dolph Lundgren), who wants to challenge Rocky, who is now so rich he owns a robot. See, awesome. Rocky refuses to fight Drago, but Apollo rises to the challenge and takes on the Russian in an exhibition match. Drago kills Apollo in the ring, so a vengeful Rocky decides to fight Drago in Russia. A few stellar training montages later, and Rocky beats the Russian on his home turf and drapes the American flag around himself. If you ask me, Ronald Reagan gets too much credit for ending the Cold War with his "Mr. Gorbachev, tear down this wall" speech. Those in the know will tell you that Rocky ended the Cold War with his speech at the end of this film: "If I can change, and you can change, everybody can change!"

Oof, Rocky V. A misstep in the franchise, this entry sees Rocky lose all of his money due to poor investments and retire from boxing because of brain damage suffered at the hands of Drago in Rocky IV. Rocky then begins training a young fighter, Tommy Gunn (Tommy Morrison), until Tommy is stolen away by Don King-like promoter George Washington Duke (Richard Grant) and turned against Rocky. Duke realizes that Gunn won't get full recognition as a champion unless he fights Rocky in the ring, but Rocky refuses to come out of retirement. In an attempt to convince Rocky into accepting a fight, Tommy punches Paulie, which prompts Rocky to challenge him to a street fight. The two brawl in the street, and Rocky predictably wins.

For 16 years, Rocky V remained a stain on the franchise, but the sixth entry many fans never thought they'd see provided a more fitting end for the character. At the time of the movie, Adrian has been dead for four years and Rocky owns an Italian restaurant where he tries to relive his glory days. Meanwhile, the current world champ is Mason "The Line" Dixon (Antonio Tarver), whom ESPN predicts would lose against Rocky in a simulated match. This angers Dixon and intrigues Rocky, and the two agree to a charity bout. The much-older Rocky manages to go the distance against Dixon, and loses in a split-decision, echoing the first Rocky film. A fitting end to the franchise.

Except, it wasn't not the end. Creed will see Rocky step into the trainer role as he prepares his fallen friend's son for a life in the ring, and it will hopefully provide another great chapter in the saga of Rocky Balboa. Fingers crossed that it features a robot.