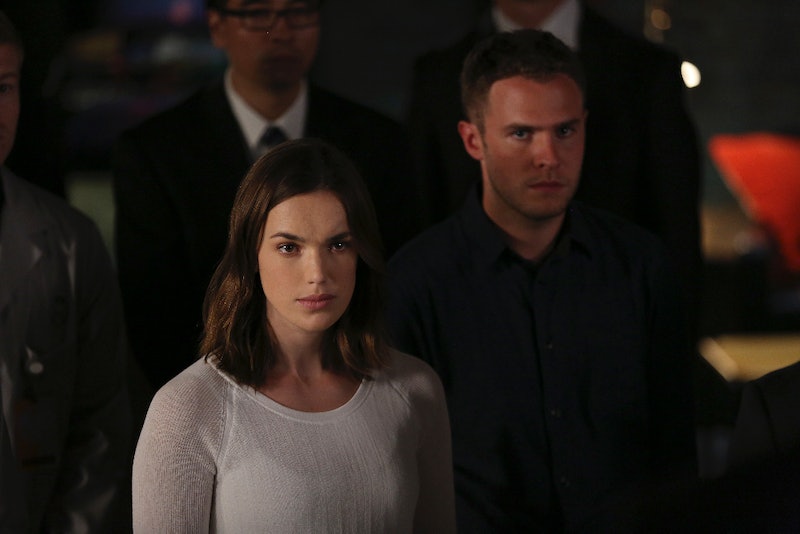 Leo Fitz and Jemma Simmons are one of the oldest 'ships on Agents of S.H.I.E.L.D. — they literally came with the name "FitzSimmons" on the ABC series. However, they started out as more like work spouses, or even work siblings. However, after almost two and a half seasons, Fitz and Simmons kissed on Agents of S.H.I.E.L.D., though the moment was fraught with drama and hurt.

They researched the symbol that Fitz identified in an earlier episode. Jemma put together that NASA deliberately sent Will's team there to die as a sacrifice. They were working with whoever, or whatever, was on that planet, and Fitz kept looking into the system's history. However, it was clear that Jemma was bothered by Leo's blind insistence that they do the right thing and try to save Will, who he shouldn't even like. Did Jemma want Fitz to be jealous of her relationship with Will? It seemed like that was part of it. Jemma stormed away and Fitz confronted her and it all came spilling out.

"We're cursed," he said. "The bloody cosmos want us apart!" All of FitzSimmons' bad timing had finally come to a head. Simmons admitted that she loved Will, but can't ignore that Fitz jumped through the universe to find her — that's a pretty major gesture. So was Fitz kissing her, and Jemma reciprocating soon after. Then Fitz said they were cursed again, and they went back to research of all things. Trust these two nerds to finally lock lips while upset and charging with a whole range of emotions and scientific discoveries.

I honestly don't know where this relationship is heading, and I'm thrilled about it. On a show with evil masterminds, secret organizations within secret organizations, and alien powers in the fish pills, this is a very grounded, realistic, and compelling relationship. It's not going to be easy for Fitz and Simmons to work out their feelings. At least they're off to a healthy, and for the most part positive, start!