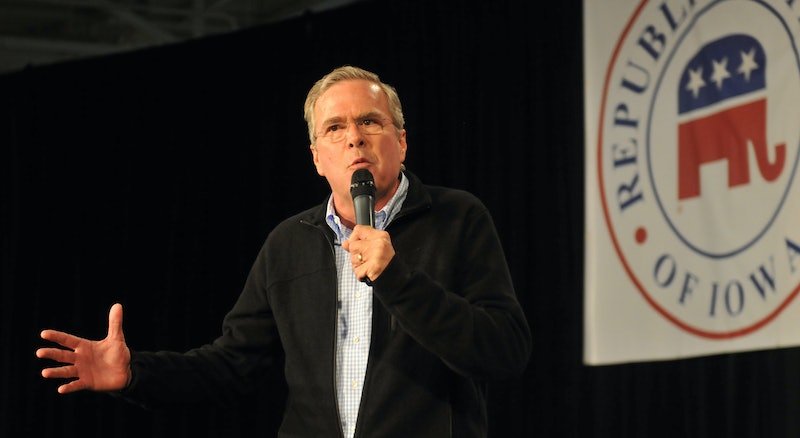 The Syrian refugee crisis is on the minds of all presidential candidates at this juncture in the election cycle. While those on the left — including Hillary Clinton, Bernie Sanders, and Martin O'Malley — have called for the country to take a humanitarian approach and accept thousands of refugees who have been displaced, a majority of GOP candidates have condemned the idea, save for one presidential hopeful. Out of the 10 Republicans who've made their thoughts known, Jeb Bush's stance on Syrian refugees is perhaps the most progressive, though it doesn't go far enough.

Unlike fellow candidates like New Jersey Gov. Chris Christie, who believes that no refugees — not even children under the age of 5 — should be allowed into the country, or Rand Paul, who believes that a visa moratorium should be implemented instead, Bush has taken a far more reasonable approach to the crisis. The former Florida governor has said that he is not only willing to accept orphans and young children, but "people who are clearly not going to be terrorists. And Christians." During a campaign stop in South Carolina, Bush had this to say about those seeking asylum from Syria:

There are no Christian terrorists in the Middle East. They're persecuted, they're religious minorities. We've had a duty as we've always had, and it's a noble one, to be able to provide support across the world. ... We have a noble tradition of accepting refugees but in this particular case, given the circumstances, I think there ought to be thorough vetting.

Fellow candidate John Kasich agreed with Bush's assessment of vetting while Carly Fiorina and Marco Rubio both felt that there was simply no background check strong enough to ensure the country's safety. Ted Cruz had said the United States was a poor choice for Syrians to settle, instead requesting they be sent to primarily Muslim countries while also criticizing the potential vetting process. As with many other prominent Republicans, Bush has also stated that he supports Speaker of the House Paul Ryan's proposed suspension of allowing more refugees in and also believes that states have a right to decided whether or not they support taking in refugees as well.

Though Bush has said he would be willing to accept "moderate Muslims" into the country after an aforementioned vetting process, his remarks speak volumes towards the discrimination that refugees are currently facing as they seek solace from ISIS. Already, 31 states have explicitly stated that they are unwilling to take in any refugees. It's highly likely that Bush would be included in that number if he were still governor of Florida.