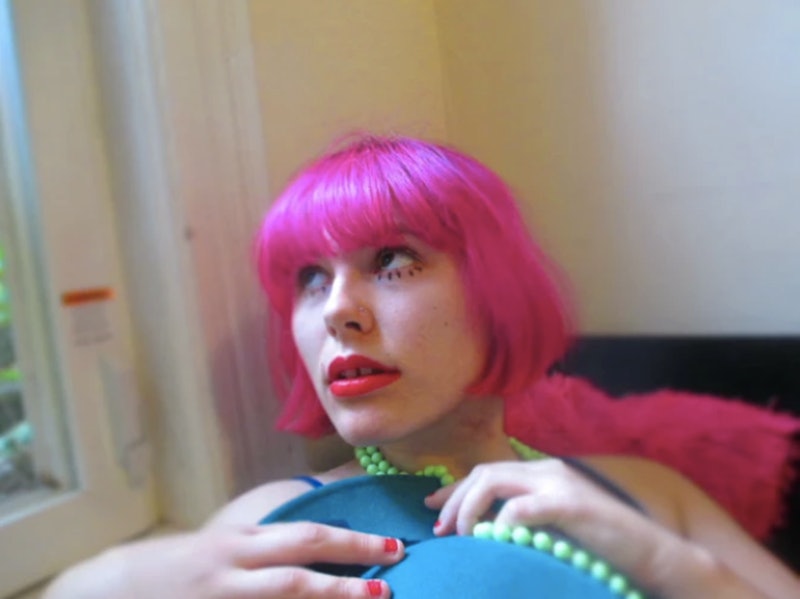 I am a vintage girl, with all that this entails. I'm a pinup, a doll, a rockabilly babe. My wardrobe consists of vintage and reproduction dresses, always paired with red lips. I swoon for starched pleats, and I’m passionate about traditional pinup fashion and imagery. Yet I cannot help but feel that we vintage enthusiasts have a problem: We often celebrate imagery created by sex workers of old, while stigmatizing and oppressing the sex workers of today.

Besides loving retro clothes, I am also a semi-professional pinup model and photographer. I have done fully nude and (some) fetish work. I am an occasional stage kitten for burlesque and drag shows. And I go back and forth almost daily on whether to call myself a sex worker. On the one hand, this isn’t my career; I'm a writer first and foremost. I will never support myself through pinup modeling, and I'm OK with that. I'm in it mostly for the love of the game. On the other hand, my experiences have given me a more intimate understanding than your average fully-clothed citizen of the issues facing sex workers. So the term I’ve decided on is “sexy worker.” I'm someone who makes money from sexualized (rather than overtly sexual) entertainment.

I’m concerned that we’re building this community — wonderful as it is — on the backs of women whom we then nakedly disclaim. I’m unsettled by the preponderance of pinup photographers who yearn for a time “when sexy was classy,” of dancers who assure us that burlesque is "an art form [...] it’s not sleazy," and of vintage enthusiasts who congratulate us on looking “so cute, and not at all slutty” (as I’ve been told on more than one occasion). These types of statements are simultaneously whorephobic (rooted in a fear of and disdain for sex workers) and gratingly ahistorical. No, Bettie Page and co. weren’t “classy” sex workers. They were sex workers, full stop.

In a blog post about "Stripping Versus Burlesque," performer Betty Field wrote:

It’s funny how quickly many burlesque performers denounce our pole dancing sisters, calling burlesque “the good stripping” and similarly distancing themselves by calling strip club dancers “strippers” and themselves “burlesque dancers” or “burlesque artists,” when to my way of thinking, the current strip clubs are a lot closer to the original environment and performance intention of the “original” burlesque than the neo-burlesque shows of today. In the heyday of burlesque in America, women were booked into the burlesque houses to perform sexually titillating (and according to the views of the time, lewd and indecent) acts, displaying their bodies in as little clothing as possible without getting arrested, all for the benefit of a horny male audience.

This is what every pinup enthusiast who “wishes women still dressed like ladies” fails to understand: Those "back in the day" women were never considered “ladies.” They were, in the eyes of many, plain old whores. You cannot simultaneously revere them and revile their present-day incarnations. You cannot look on strippers with pity and call their body modifications “mutilation” — as burlesque producer Bunny Bravo did — while marketing your own craft as a more enlightened version of what they do.

I don't think that we, as performers, should be aggrandizing ourselves on the backs of the women who built these subcultures — whose arrests and alienation won us the right to present ourselves this way in the first place.

This problem is not unique to the retro community, of course. Actress Rashida Jones, who infamously admonished Hollywood’s youngest and hottest to “stop acting like whores,” posed in lingerie for GQ . Without the “whores” around to push the boundaries of acceptable female sexuality, Jones’s sexy photo shoot could have potentially been career suicide.

Internally, I know all of this. Yet I am ashamed to admit how often I have — to save face in whorephobic environs — referred to what I do as “empowered stripping,” “classy stripping,” or even “sex-positive stripping.” I'm ashamed that I've drawn on arbitrary, whorephobic distinctions to legitimize myself, and I want it to stop.

I don’t want to end creative anachronism. I don’t even want to change it. I’m thrilled that these arts still exist, and that eras and cultures are blending to produce something greater than the sum of their parts. Developments like nerdlesque, and the mixing of traditional pinup imagery with goth and steampunk subcultures, are taking these arts to amazing new places, and I’m nothing but excited. There’s so much to love here, which is precisely why I think we can do better.

We sexy workers can distance ourselves from sex workers without vilifying or condescending to them. There are salient differences between (and within) the two communities, which we need to be able to discuss. But let’s call them what they are: Two branches from one great tree, or two interpretations of the same artistic essence. Without shame and without hierarchy.

And vintage girls? I ask you to think critically about the nature of your inspirations. If we’re going to draw inspo from imagery created by sex workers of old, it’s vital that we support the sex workers of today. We mustn't weaponize their own imagery against them, using our pin curls and thigh-highs to draw sharp distinctions between respectable sexuality (us) and filth (them). We mustn't hoot and holler at burlesque shows while dismissing strip clubs out of hand as “sad” or “exploitative.” We mustn't call sexual expression slutty. Memes like "when did [modern girls] become hotter than [vintage girls]?" are simultaneously disrespectful and powerfully ignorant of historical context. If Bettie Page seems classier than, say, Heidi Montag, it's only because time and changing attitudes have softened her edge.

Above all, we need to recognize that the women we idolize were groundbreaking. It's because of them — sex workers and all — that today's vintage enthusiasts are able to enjoy the comforts of social acceptance. For that, I’m forever grateful.