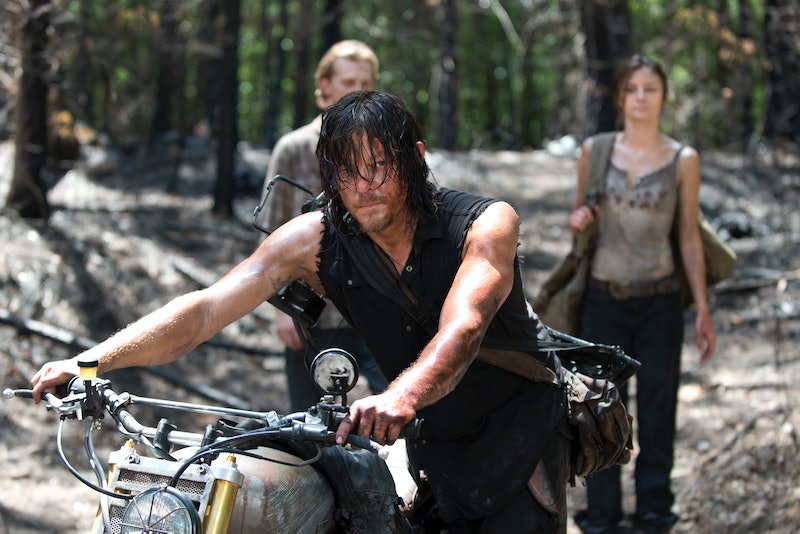 If you're a follower of Rick Grimes, you've had an eventful couple of Sunday nights this fall. The sixth season of The Walking Dead has been an emotional roller coaster for its fans and after the last episode every single person is wondering who said "help" on the walkie talkie? There are only two episodes of The Walking Dead left in 2015 and it seems unlikely that we will get all the answers we've been waiting for. Besides finding out if Glenn is really dead, we need to know who's begging for assistance on the other side of that radio.

First, a quick recap of we got to this walkie nonsense: Daryl, Sasha, and Abraham took center stage and, like everyone else, got lost and into some trouble. Sasha and Abraham got into a shootout with two still unidentified people chasing them down. Daryl was captured by a man and two girls and many fans have suggested that the man might be Dwight, one of Negan’s Saviors. Daryl did manage to escape and then came back when the threesome was being hunted down by other men. He thought they were decent people, but then they turned on them and stole his beloved crossbow and his motorcycle. He managed to get out and find Sasha and Abraham, but they headed back toward Alexandria, a male voice said “help” on the walkie talkie.

Lucky for you, I have some ideas about who it might be.

Hear Me Out: Glenn

Yes, I know Norman Reedus told EW that it wasn't Glenn on the other side of walkie, but what if he's lying? Or what if he doesn't know the full truth? I don't really trust anyone when it comes to telling us the truth about Glenn, so I want to keep the option on this list. I think they are still trying to throw everyone off so it’s a “surprise” when we find out he’s alive.

Rick had a walkie talkie that he was using consistently throughout the season. We really have no timeline of when this all took place, but I’m betting that all these episodes are happening at the same time, but different points of view in each episode. So maybe Rick asks for help when he gets trapped in the RV, as we saw in the prior episodes.

It's rumored that the man Daryl had an encounter with is Dwight, a Savior. Maybe he's tricking them or luring them back to Negan. Clearly, he's not to be trusted after he stole Daryl's crossbow.

We haven't met him yet, but we do know that Paul Monroe, also known as Jesus, has been cast and is slated to appear in future episodes. Maybe him calling out for help over the walkie talkie is our first introduction.

Maybe when Morgan got back to Alexandria, saw the Wolves attacking and tried to walkie Daryl for help. Again since we don't know when this was in relation to everyone else's storylines, it's definitely a possibility.

He always needs help, so I wouldn't be surprised.