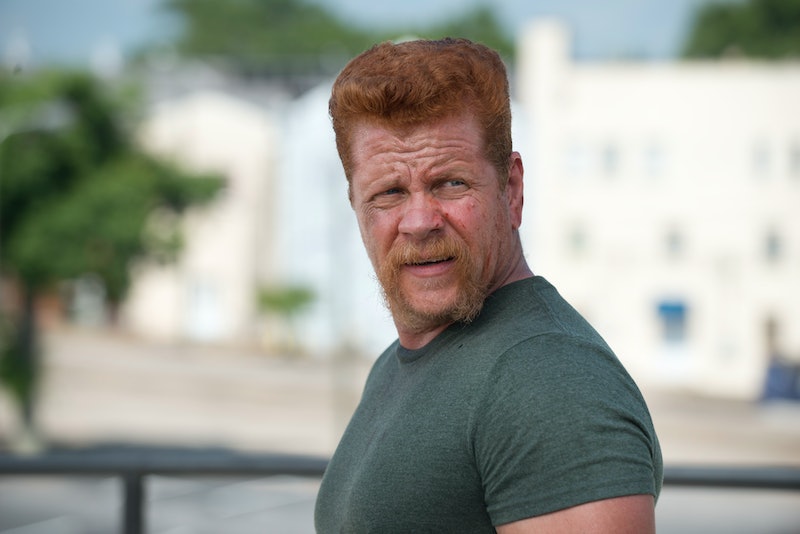 Pretty please, with cigars and stolen crossbows on top, tell me that we finally got confirmation about Glenn's fate in Sunday night's episode of The Walking Dead. It's been three episodes now since the fan favorite character took a possibly fatal fall, but the end of "Always Accountable" offered some potential hope. Was that Glenn saying "help" on The Walking Dead ? The male voice that came through Daryl's walkie talkie with that solitary and haunting word seemed like it could belong to Glenn Rhee.

We know that Glenn and Nicholas had one of the walkie talkies. We also know that in a previous episode, Rick asked specifically for Glenn, got a static response, and then had to deal with some Wolves in his RV before the conversation was resolved. It's also likely that Sasha, Abe, and Daryl are closer in range to Glenn's location than behind the walls at Alexandria. I know Season 1 played fast and loose with the mechanics of two-way radios — remember when Rick used to leave long voicemail monologues for Morgan? Still, while there are plenty of other people that could have left that "help" message, Glenn seems like the most likely option for a purely logistical standpoint.

Unfortunately, actor Norman Reedus shot down this theory almost immediately in an interview with Entertainment Weekly.

Wow, Reedus. Don't let me have this moment. However, hasn't Glenn "changed" since his arc with Nicholas completed? Is Glenn ever going to truly be Glenn again? Who's to say? Reedus could be trolling, or giving us a version of the truth. I'm not sure how many times I can blatantly ignore The Walking Dead cast and crew members about Glenn, but it just seems to make the most narrative sense that he (or someone connected to his continuing journey) is on the other end of that walkie talkie.

If it wasn't Glenn, did someone steal his radio to send that "help" message? Is Alexandria under attack again, already? If I'm being honest with myself, it also sounded like it could be Carl. He could have gone off in search of Enid and gotten himself trapped beyond the Alexandria walls, which are now swarming with Walkers. This could be like the horn at the end of the season premiere — perhaps Sunday's episode was happening simultaneously with next week's episode, and "help" is how the timelines will match up. No matter who it was (but it's probably Glenn, no matter what Reedus says), at least The Walking Dead survivors are going to be in the same place again. It's far too stressful, and sometimes even tedious, when they are apart.