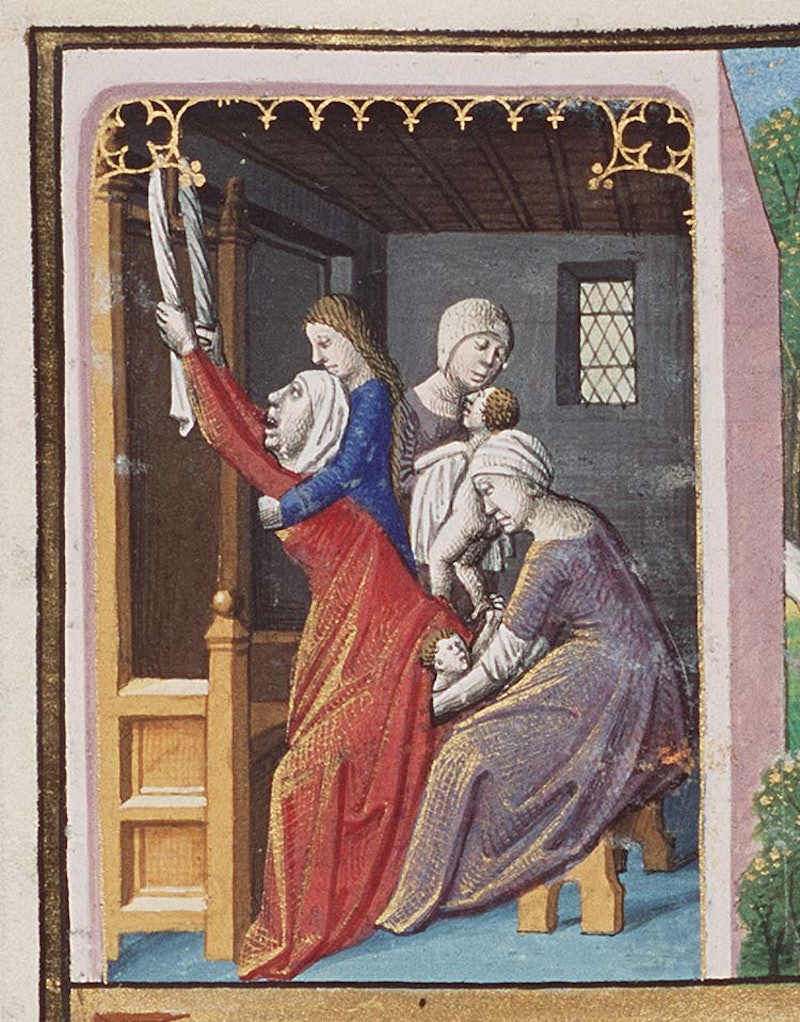 For most of human history, childbirth was one of the most dangerous things that a woman could do; indeed, it still is for many women. So, understandably, a lot of ancient civilizations had rituals, spells and ceremonies to try and make every aspect of childbearing go smoothly, from assuring the fertility of a woman to easing the delivery of a baby — and many ancient cultures had detailed birth manuals, because getting the rituals right could get seriously complicated.

We still have many beliefs about birth and the "right" way to do things: witness the many online arguments about the various virtues of hospital birth versus home birth, giving birth naturally versus using painkilling medications, working with a doulas versus only seeing doctors, and basically any other choice involved in the birthing process. So you can imagine how intense the conversations probably got, back in the ancient world, when expectant mothers were choosing between drinking goose semen or sitting on a dog's placenta, or wondering whether you truly needed four strong women to shake you intensely in order to get some contractions going. We're lucky no one had invented parenting message boards yet.

Here are six ancient beliefs about childbirth that will either make you want to cross your legs, or feel pangs of serious sympathy for the women who had to go through this thousands of years ago. Modern gynecology looks like magic in comparison.

1. Determine Your Fertility By Sitting On Dirt And Beer

If we believe a gynecological document called the Kahun Medical Papyrus that is currently archived at the University College in London, the ancient Egyptians were very invested in the idea of childbearing capability itself. Before you even got into the whole "birthing" problem, you had to figure out whether you or your chosen lady could get knocked up. The Kahun Papyrus — which, incidentally, is the oldest medical text in history — details some pretty interesting tests to determine fertility. Spoiler: they're not exactly dignified.

One particularly brutal method was to hit the woman on a particular part of her lip; if it didn't hurt, she was thought to be infertile forever. (Ouch.) But the worse one, in my opinion, was the test involving a heap of dirt. How's this for fertility testing: a woman sits on a mound of dirt that's been soaked in old beer, and possibly mixed with fruit and dates. For every time she throws up while sitting there, that's one child she'll have in the future. If she's got a strong stomach, though, no kids for her (which seems to fly in the face of everything we know about motherhood now, i.e. that having a strong stomach is a pretty great asset).

2. Put Hemp & Corn In Your Vagina To Induce Labor

The ancient Egyptians also had some interesting rituals when it came to actually getting birth itself started. One was to cast spells on an amulet placed on the forehead of the pregnant woman, which doesn't sound particularly bad — but there were a number of more invasive options. Another medical text, the Ebers Papyrus, suggests putting a few concoctions — including honey soaked with hemp, or a handful of ground corn — up the vagina itself to make labor begin. No word on how the babies born via this method felt about coming into this world basically breaded like a cutlet.

3. Keep All Knots Out Of The Delivery Room

Ancient Greek mothers-to-be were subject to a number of superstitions about the whole birthing process and what could be done to make it go more smoothly. One notable belief was that a poultice tied to the thigh could ease the difficulty of labor (which, you've got to admit, sounds better than the above-mentioned corn tampon).

Another more abstract superstition was the idea that having any knots in the delivery room would serve as a magical "obstacle" to the baby's birth, so they all had to be undone. From the mother's belt to wreaths on the walls, everything in the vicinity had to be rapidly unknotted. Knots were regarded as nasty symbols of general evildoing, so woe betide you if you happened to attend an ancient Greek birth with a fancy plait in your hair.

4. Let Four Women Shake You Until You Have Contractions

Ancient Greek beliefs about the medical treatment of various problems during childbirth were preserved well into the Middle Ages — meaning that the treatments recommended by people like Hippocrates and Galen would have been pretty familiar to medieval ladies. (Poor them.) So when medical texts from ancient Greece recommend, say, being shaken violently by four women to induce labor, you know it happened for at least a thousand years.

Yes, you read that right. One remedy for starting contractions involved getting four women (one for each limb on the pregnant woman), and demanding that they shake her extremely hard at least ten times — plus a few more after she'd lain down. The idea, presumably, was to "shake" the baby loose, though it can't have been much fun for the mom.

5. Step Over One Dead Man And One Living Man To Ensure Easy Delivery

According to Delores LaPratt, a researcher at McGill University, ancient Anglo-Saxon women had their own peculiar way of guaranteeing that their pregnancies would be easy and their births without complications: perform a ritual dance involving one dead man and one live one.

6. Drink Goose Semen To Cope With A Difficult Delivery

When it comes to seriously disgusting medical remedies and beliefs, the ancient Greeks — and Pliny The Elder in particular — are kind of inspiring. There's not a single substance in nature that they didn't contemplate using for some medical purpose or other. Getting yourself well in ancient Greece required a total lack of squeamishness, and that included childbirth.

Pliny did, at least, give lots of options. If you were having a difficult delivery, and you (for some inexplicable reason) didn't want to drink goose semen mixed with water, you could also drink the liquid from the uterus of a weasel, or a concoction of powdered sow's dung. Not thirsty? Then the fat of a hyena could be burned underneath you if you like, or perhaps you'd prefer having the placenta of a dog placed on your thighs? The menu was endless. To be honest, that may have been the point: make the remedies so disgusting that birth, itself, looks like an easy job.