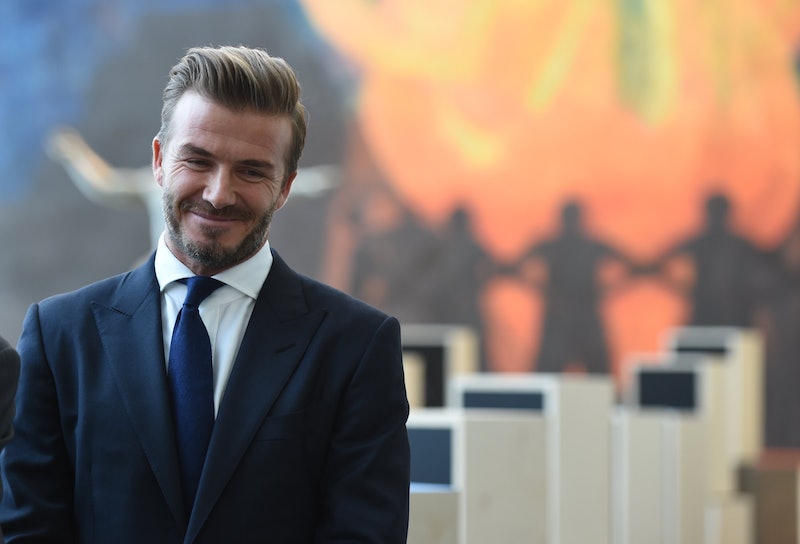 Awesome hair, don't care! Soccer star, husband of Victoria Beckham, and father of four David Beckham is PEOPLE 's Sexiest Man Alive, so congrats are in order for the hot, heavily tattooed athlete with the awesome, ever-changing hair. It's easy to see why the man known as "Becks" has been christened with this honor. He's handsome and he has impeccable style. He doesn't hide the fact that he puts a lot of time, thought, and care into his look. You can't deny the results.

Becks often pairs his bad boy tattoos with his always on trend coif and crisp, tailored suits. Or his on field uniform!

Blowbacks, faux hawks, close-cropped, bleached blonde... whatever. Beckham is not afraid to experiment with his locks and that has made him a hair icon among men.

To celebrate Beckham's esteemed appointment to PEOPLE's Sexiest Man Alive pantheon, we're looking back at his best 'dos. Beckham is normally a sandy blonde who looks like he has spent his whole life surfing Pacific Ocean waves in California. He is blessed with a thick crop of hair that is malleable and that bends to both his and his stylist's whims and wills.

Beckham is so hot that he makes fire jealous. Here are some of his best hairstyles through the years.

A simple black suit and a slicked back 'do made for a classic, leading man presentation. He repeats this look often and it's easy to understand why. It works.

He rocked long and slicked back hair with Skrillex-like, shaved sides. It was a dapper yet youthful take on the pompadour.

The soccer star's hair was the same shade as his wife's! His marriage-matched hair was amazing. Both he and Posh went extra short and bleached blonde. Two of a kind, indeed.

Beckham has rocked a variety of faux hawks through the years. This one was the most classic and polished.

There was nothing faux about this punk rock hairstyle. It was a legit mohawk and he wore it well. He totally looked like he was trying out for a role in a Sex Pistols doc.

His longer locks were bright blonde at one point. It was a statement-making shade.

This coif was the equivalent of a female getting sick of maintenance and just chopping off her long locks for styling ease and to save time. He opted for peach fuzz with no additional color, which was fine, since you can see more of his face. Basic Becks was still a sexy Becks.

How can you not love that little flip curl thing in the front? It was unexplainable but amazing.

The growing out phase of a short cut usually sucks. But as Beckham grew out his faux hawk —making this a "grow hawk"— he still looked fab and stylish. It wasn't messy, awkward, or too "in between."

Since Becks favors longer locks and needed them out of his face while on the field, he was never afraid to rock the man pony.

Because duh! Of course Beckham has done the ever-popular man bun.

Technically, it's not a hairstyle but it is a cool accessory and look.

Long, choppy goodness is one of his signatures with layers in the top.

While he does have his "go to" looks, Beckham is not afraid of change or of trying new coifs, all of which are currency in his sexiness game.

More like this
The $6 Shower Essential That Julianne Hough Loves
By Olivia Rose Ferreiro
12 Bob Haircut Trends That Are Everywhere For 2022
By Audrey Noble
The $6 Drugstore Beauty Product Taraji P. Henson Uses Every Single Day
By Danielle Sinay
The Best Beauty Looks From The 2022 BET Awards
By Audrey Noble
Get Even More From Bustle — Sign Up For The Newsletter