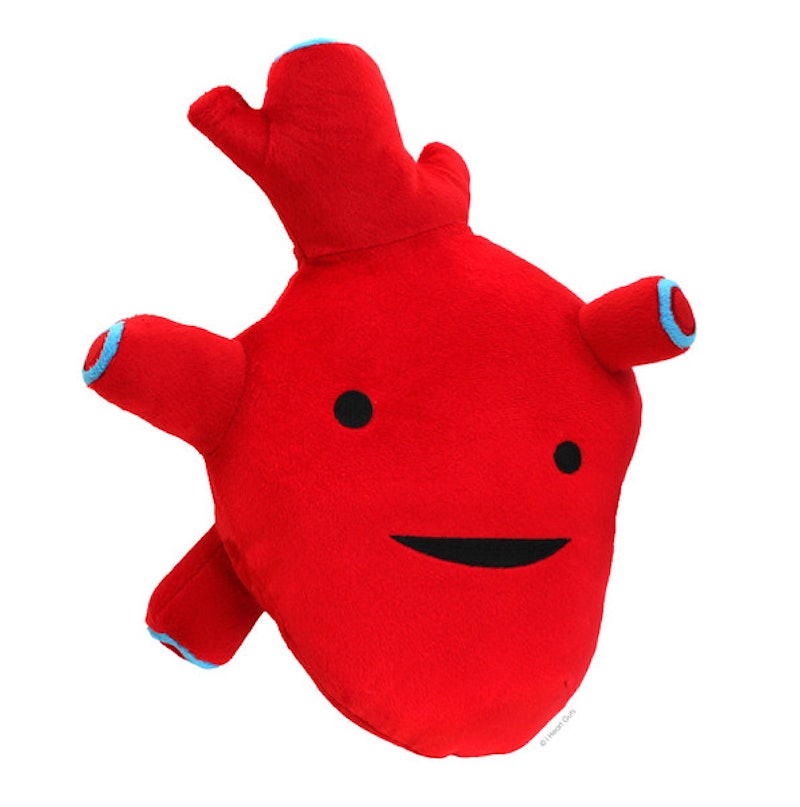 “Wow, that’s an adorable pancreas!” may not be a phrase you thought you’d ever utter, but these snuggly plush internal organs from I Heart Guts will make you see our slippery insides in a new (and shockingly cute) way. Created by artist Wendy Bryan Lazar, these friendly stuffed organs have become especially popular among people dealing with chronic illnesses, who use the organs as companions during hospital stays, sources of much-needed humor, or simply tools to externalize what’s happening inside their bodies.

Lazar explains on the I Heart Guts website that her first foray into drawing personified organs began with a drawing of a broken heart that she made “after a string of bad hookups, dead-end relationships and lame-o boyfriends.” She says, “At the time, I was also doing a lot of drinking and smoking, so a sad liver and bummed-out lung followed.” Years later, as she continued to sketch organs in her spare time, her husband encouraged her to “do something with those darned guts,” and, in 2005, I Heart Guts was born, selling buttons and stickers. In 2007, Lazar started selling plush toys.

Lazar told Mental Floss that when she started making the toys, she assumed they would appeal to “weird people” or medical students; however, she didn’t imagine the impact they might have on people with chronic health conditions. She said, “I didn’t think that much about people whose organs are working against them inside their bodies.” Contrary to her expectations, I Heart Guts proved to be hugely appealing among the chronically ill, so much so people with chronic conditions soon became the company’s largest customer base.

About half of adults and eight percent of kids deal with chronic illnesses — long lasting health conditions that range from heart disease, to arthritis, to cancer, to diabetes. These conditions can cause pain and discomfort for people on a daily basis, but, as Mental Floss points out, the cost of chronic illness goes far beyond the physical. These conditions, which can last for months, years, or even lifetimes, also take a huge emotional and mental toll. Lazar explained that this why I Heart Guts products are so popular among chronically ill customers: “People who are having a hard time with their illness need to laugh.”

Testimonials on the I Heart Guts website show that these cuddly organs have been a major source of humor and comfort to a lot of people. Customer Richard S. wrote:

My nephew has cystic fibrosis and is waiting on a lung transplant. I sent him the Loud Lungs plush organ. It made his day. Days in the hospital are long but the ‘Loud Lung’ made today a little better.

Cara H. said, “I have ulcerative colitis and having my colon completely removed January 16. The plush will be my buddy for my hospital stay. I've named him Chester. He is my healthy colon that will never hurt me.”

Lazar told Mental Floss that she couldn’t pick a favorite among her 29 plush organs, saying, “That’s like asking me to pick a favorite child.” But if she won’t name her faves, I will. These are a few of mine:

I Heart Guts, currently sold out.