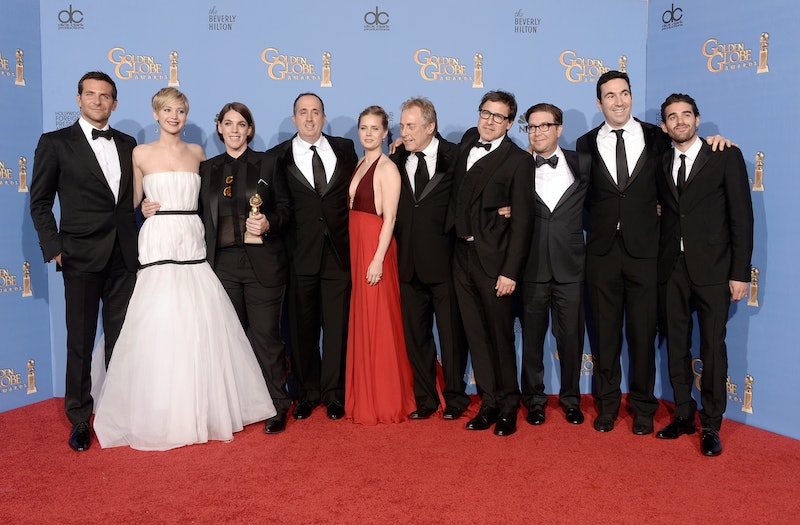 The Golden Globes were their usual amount of wild and weird this year. There were many sexy beards, someone got lost walking to the stage, and Leonardo DiCaprio finally won an award. Although 2013 was a relatively good year for diversity on the big and small screen, though, the Golden Globes were all white, all the time.

The trouble started before the Globes aired, when only 11 of the 80 candidates were people from diverse backgrounds. This includes both racially diverse candidates, and candidates of diverse ethnicities, and they only make up one eighth of the candidates. This also does not include the films and TV shows that were nominated, of which most had white-dominated casts, with a few notable exceptions like 12 Years A Slave. Also problematic was the complete erasure of The Butler and its cast from the nominations: we know it's been a top-heavy year in dramatic film, but it deserved at least one nomination.

When the ceremony opened, perceptive viewers knew it was going to be a whitewashed night. First, Jennifer Lawrence won Best Supporting Actress over Lupita Nyong’o. Later, Don Cheadle, Idris Elba, Sophia Vergara, and Chiwetel all missed out on awards, and we worried that 12 Years A Slave and other diverse films and shows would never see the stage. Then, Reese Witherspoon stepped up to the microphone.

Why, exactly, did a white girl from Louisiana present a movie that describes the horrors of slavery? Anthony Mackie is from New Orleans, so why couldn't he present the award? Also, when describing the director of 12 Years A Slave, Steve McQueen, the camera focused not on his face, but on an older white gentleman.

Every individual award at this year's Golden Globes went to a white person, sans one. At the very end, when the time came for Best Director, the amazing Alfonso Cuarón's name was called for Gravity, and there was finally a hint of diversity. After that, 12 Years a Slave, after no recognition the entire night, won Best Motion Picture for drama, and it seemed like the awards had taken a slightly better turn.

However, in a year when SNL finally learned the error of its ways, multiple African American ensemble movies made box office waves, and Oprah tackled a difficult dramatic role, the Golden Globes should have represented a more diverse crowd. The nominations were whitewashed, the winners were predominately white, and the entire night felt out-of-step with the (slowly) improving state of diversity in Hollywood.

Oscars, we're looking at you to pick up the slack.