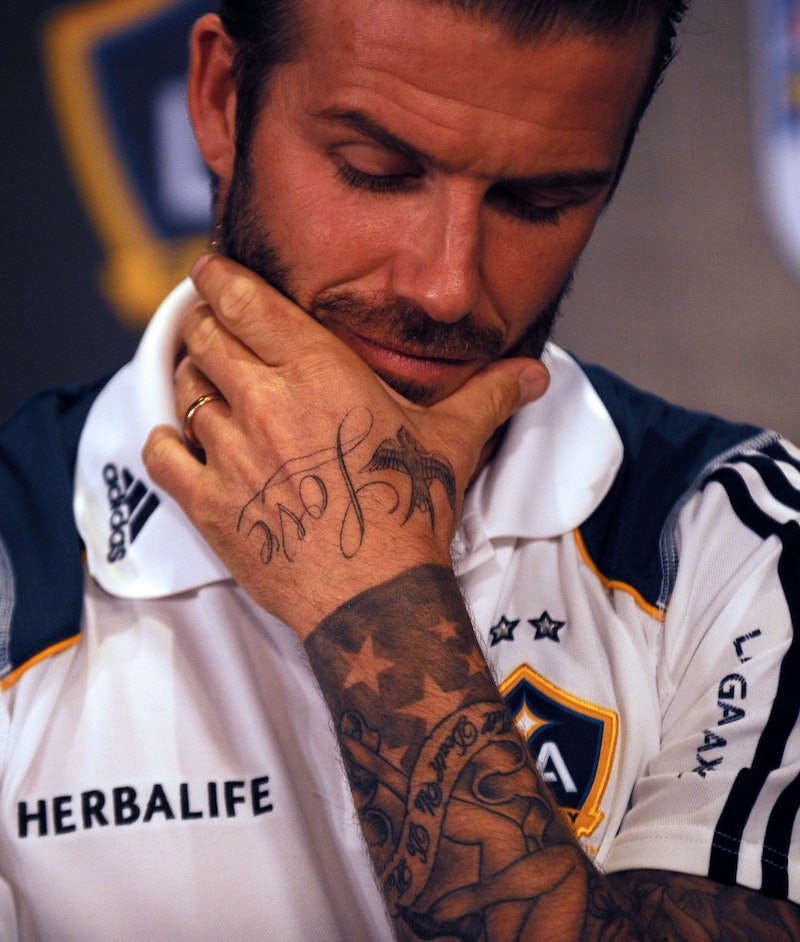 Like many past winners of the People's Sexiest Man Alive Award, this year's man has tattoos — a lot of tattoos. Just how many tattoos does David Beckham have? Well, the number is constantly growing, but as of now, he's up to 44 pieces of ink, which cover his arms, back, side, and chest. The tattoos are are strategically placed and many of them are very meaningful to the soccer star. Perhaps Beckham will get a tattoo to commemorate his Sexiest Man Alive award? After all, he's got a tattoo for pretty much every other life accomplishment.

On top of his sleeve and chest filled with religious symbols, he has a multiple tattoos in honor his children and wife as well. In fact, he's even allowed his children to design some of Beckham's ink themselves!

According to The Mirror, Beckham has spent over $58,000 on tattoos as of August, and that's not counting the four that he's gotten since them. I guess that's what makes him so desirable though. He's got everything from Jay-Z lyrics to his favorite saying from Roman emperor Caligula tatted on him. How he thought of 40+ meaningful icons to put on his body I have no idea, but it sure does make looking at him all the more interesting.

With a suit and tie on, you might not even notice just how many tattoos he has, but once his shirt comes off it's clear just how inked up the man is! Beckham has some truly one-of-a-kind drawings mixed in among the more traditional designs. Here are just a few of his most original tats.

1. A Message From His Boys

His most recent tattoo was a heartfelt message from his sons written in their own handwriting.

He let little Harper have a turn playing tattoo designer, too.

He got his son's nickname permanently put on the side of his neck.

Harper's nickname is on the opposite side.

The number symbolizes the year he got married as well as the year his first son was born. He also led Manchester United to victory the same year.

A combination of seven and 23, which were both his soccer jersey numbers.

His hand tattoo says "lead with love." Perhaps he's referring to his time on the field, or in his role as a father?

His large back design was his first ever tattoo. I wonder if he knew then that he's be adding 43 more!

With or without the tattoos, Beckham is pretty gorgeous to behold.