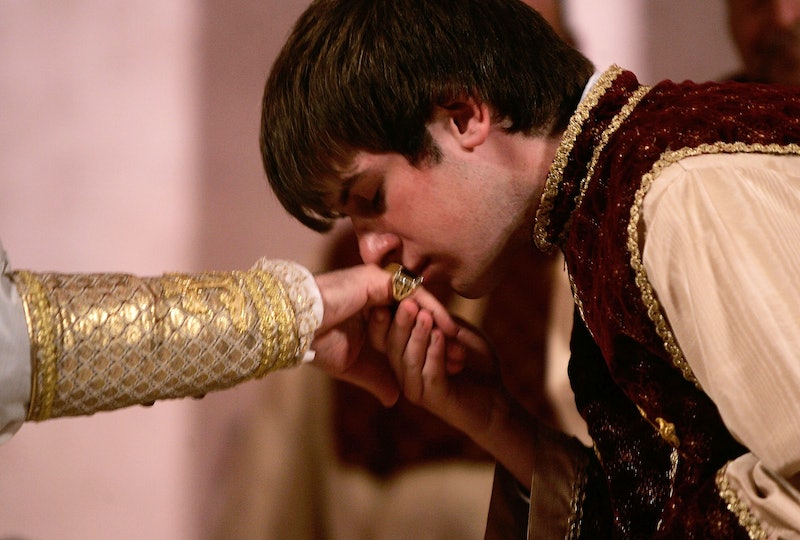 Authors are great at a lot of things — taking readers to new and exciting worlds, making you fall in love with fictional characters, giving us all the Feels with a capital "F" — but there is one thing writers are notoriously bad at: writing sex scenes. Whether you read literary fiction, fantasy and sci-fi, romance, or something else entirely, you have probably been exposed to bad sex writing, but there are are plenty hot sex scenes in books, as rare as they might be.

You're probably rolling your eyes right now and thinking about the cringe-worthy book passages that were nominated for this year's Bad Sex in Fiction Award, but don't let the bad metaphors and lack of protection in those novels turn you off. Yes, there are plenty of awkward, ill-advised, and just plain unsexy writing published every year, but there are those magical times when an author has just the right words to turn their characters and their readers on.

"They began to make love against the library shelves which creaked with their movement. It is common enough at such times to fantasize arriving in a remote high place. He imagined himself strolling on a smooth, rounded mountain summit, suspended between two higher peaks. He was in an unhurried, reconnoitering mood, with time to go to a rocky edge and take a glimpse of the near-vertical scree down which he would shortly have to thrown himself. It was a temptation to leap into clear space now, but he was a man of the world and he could walk away and wait. It was not easy, for he was being drawn back and he had to resist ... She was calling to him, inviting him, murmuring in his ear. Exactly so. They would jump together. He was wit her now, peering into an abyss, and they saw how the scree plunged down through the cloud. Hand in hand, they would fall backward."

Metaphors for sex can come of as cheesy and awkward, but in this case, it is pure hotness and anticipation. Hey, the couple that finishes together, stays together.

2. The Delta of Venus by Anaïs Nin

"Only the united beat of sex and heart together can create ecstasy.When she closed her eyes she felt he had many hands, which touched her everywhere, and many mouths, which passed so swiftly over her, and with a wolflike sharpness, his teeth sank into her fleshiest parts. Naked now, he lay his full length over her. She enjoyed his weight on her, enjoyed being crushed under his body. She wanted him soldered to her, from mouth to feet. Shivers passed through her body."

When sex isn't just about the body, things can get pretty hot and heavy.

3. After You by Jojo Moyes

"I wanted to kiss him forever. I blocked out all thought about what this was, what it might mean, what further mess I might create for myself... And I kissed him until reason seeped out through my pores and I became a living pulse, conscious only of what I wanted to do to him ... And suddenly we were crashing around the little railway carriage, all hands and lips and, oh, God, the scent and taste and feel of him. It was like tiny fireworks going off all over me, bits of me I'd thought dead reigniting to life."

Are you drooling a little bit? Yeah, me too.

4. Something Red by Jennifer Gilmore

"Elias opened her blouse slowly, twisting each button with his thumb and third finger, then running his finger along her breastbone. When her shirt finally fell open, he studied her, then caressed her breasts. Was he putting her on? He licked her nipples, then moved his lips slowly down her stomach, and Sharon couldn’t have cared less if he was. Elias removed her underwear, and kissing her just above her pubic bone, he slipped two fingers inside her. Sharon moved into his hands until he stopped suddenly, removing his fingers as if he’d thought better of the whole thing. "

Strangers in a hotel room — dark, sexy, and mysterious, am I right?

"One of them wrestled her to the cold damp sand, hard-packed as dirt. She was fighting, laughing, her red dress torn, her garter belt and black lace panties twisted ... Full on her startled lips Cass Chaplin began to kiss her, gently, then with increasing pressure, and with his tongue as he hadn't kissed her in so long. Norma Jeane grabbed at him desperately, arms around his head, Eddy G sank to his knees beside them and fumbled with the panties, finally ripping them off. He stroked her with skillful fingers and then with his skillful tongue he kissed between her legs, rubbing, nudging, poking, in a rhythm like a giant pulse, Norma Jeane's legs twined about his head and shoulders desperately, she was beginning to buck her hips, beginning to come, so Eddy quick and deft as if he'd practiced such a maneuver many times shifted his position to crouch over her, as Cass was now crouching over her head, and both men penetrated her."

6. The Witching Hour by Anne Rice

"She closed her eyes, feeling his lips on the back of her neck, feeling his fingers tracing the length of her spine. There came the pressure of a warm hand clasping her sex, fingers slipping inside her, lips against her lips. Fingers pinched her nipples hurtfully and deliciously ... She felt herself being lifted, her feet no longer touching the floor, the darkness swirling around her, strong hands turning her, and stroking her all over. There was no gravity any longer; she felt his strength increasing, the heat of it increasing ... She was floating in the air. She turned over, groping in the shadowy tangle of arms supporting her, feeling her legs forced apart and her mouth opened. Yes, do it,"

If you're going to be seduced by an evil spirit who has been plaguing your family for years, this is definitely the way to do it.

7. Their Eyes Were Watching God by Zora Neale Hurston

“They fought on ... They wrestled on until they were doped with their own fumes and emanations; till their clothes had been torn away; till he hurled her to the floor and held her there melting her resistance with the heat of his body, doing things with their bodies to express the inexpressible; kissed her until she arched her body to meet him and they fell asleep in sweet exhaustion."

Though the detail is minimum here, this is possibly the hottest make up sex ever written.

"In the shower, Bobby lets me make out with Jamie and Bobby's head is in between her legs and Jamie's knees buckle a couple of times and Bobby keeps propping her up with an arm ... I'm bending my neck back, letting the water stream down my chest, and when I look back down Bobby's looking up at me and grinning, his hair wet and pressed down on his forehead, his tongue extended, pink against his face"