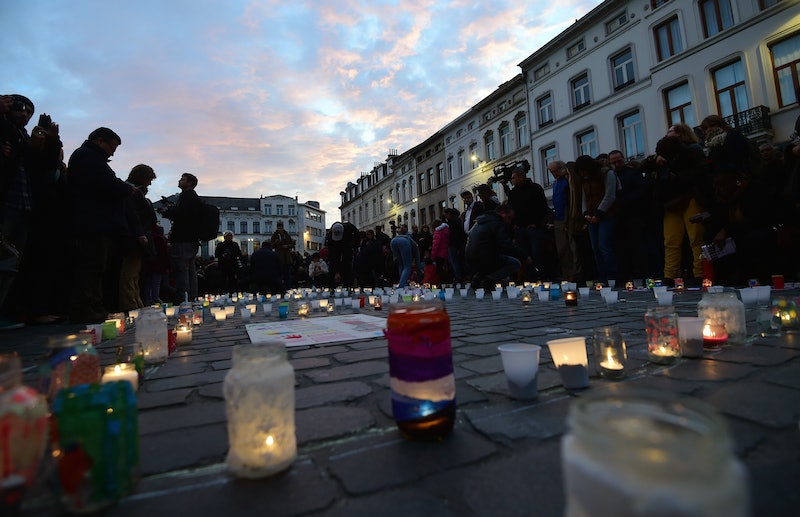 In the wake of the Paris attacks, which shook not only France but the entire world, one message has resonated everywhere: Love is stronger than violence. The tragedy, which left 129 people dead and hundreds more wounded, has surely been a difficult event for young children to understand — especially those who live in Paris and have been faced with the unusual sights of police swarming the streets and mourners gathering to lay flowers and candles in public memorials. However, as one video captured, sometimes it's the simplest explanations that are the most powerful. One father explained the Paris attacks to his son by conveying that love conquers hate, and it's truly inspiring to see the young boy transform from frightened by violence to empowered by love.

In the now-viral video, a reporter for French news show Le Petit Journal interviews a father and son at one of the many memorial sites in Paris. The young boy, who appears to be about three years old, is visibly frightened, but with his father's soothing words, he's able to shed his fear. Using a very simple explanation, his father is able to help his son comprehend the complex power of love. It is perhaps the most poignant reflection of the "love conquers all" message we've yet seen after these attacks.

In the video, the reporter asks the boy if he knows why the attacks happened. The nervous boy answers:

Yes, because they’re very, very, very mean. The bad guys aren’t very nice. And we really have to be careful because we have to change homes.

His father, kneeling beside him, reassures his son, saying:

No, don’t worry, we don’t have to change homes. France is our home.

However, the young boy is not convinced:

But there are bad guys, Daddy.

The boy is clearly affected by violence he can barely comprehend. He pleads with his father:

That's when his father delivers to his son the most powerful message that can be expressed in a dark moment like this.

Well, they have guns, but we have flowers.

But flowers don’t do anything.

His father reassures him:

See all the flowers? They’re to fight against the guns.

It’s to not forget those who left us yesterday.

The boy finally appears comforted, as if a deeper part of himself he wasn't even aware of has understood.

The flowers and the candles, they’re there to protect us.

After this realization, the reporter asks the boy if he feels better, and he replies, "Yep, I'm feeling better."

Sometimes it takes the simplest exchange with the youngest of subjects to illustrate the boundlessness of human strength.