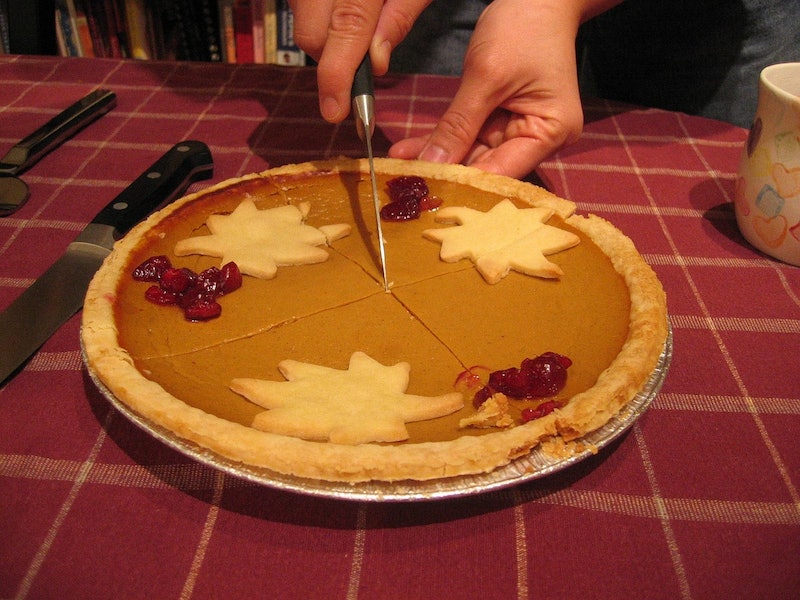 As the Americans are gearing up for their Thanksgiving festivities — defrosting turkeys, deciding where on the couch they’re going to take their post-feast naps, and making battle plans for storming their favorite electronics superstores — Canadians are looking ahead to a totally normal, late-autumn weekend. And it’s not because they are cantankerous Scrooges who hate giving thanks — actually, Canadians got on the gratitude train early, and had their Thanksgiving celebrations way back in October.

In fact, some have even argued that Canadians hopped on the Thanksgiving train really early — as in, FIRST — decades before the Americans did. In 1578 — more than 40 years before the American pilgrims — English explorer Martin Frobisher held the first Thanksgiving celebration by a European in North America in Newfoundland. He and his crew were giving thanks for their safe return from a treacherous exploration of the Northwest Passage. Some people (mostly Americans) have argued that Frobisher’s Thanksgiving doesn’t count as the first Thanksgiving because a proper Thanksgiving is officially held in gratitude for a good harvest, not for surviving a dangerous icy hellscape. As fighting about who held Thanksgiving first seems to go against the spirit of the holiday, I think we can all just shake hands and agree that the indigenous peoples of North America were giving thanks for good harvests and bountiful food long before the Europeans showed up.

Thanksgiving was observed sporadically by Canadians in the 17th and 18th centuries and with regularity in the 19th. The day was finally formalized as a national holiday in 1879. So what’s the difference between giving thanks in the States and in the Great White North? I’m an American living in Canada, and I’ve got the scoop:

It’s in October — so Canadians get to put up Christmas decorations a full two months early.

In Canada, Thanksgiving Day is the second Monday of October. Canadians automatically get that Monday off in most parts of the country, but in Atlantic Canada (Prince Edward Island, New Brunswick, Nova Scotia, and Newfoundland and Labrador), it’s an optional holiday, so some businesses might give employees the day off, but others might not.

In the U.S. many of us argue (unsuccessfully) that Christmas decorations shouldn’t go up until after Thanksgiving, but here in Canada, there is no such barrier. The lights and wreaths start showing up the day after Halloween, if not before.

It’s on a Monday — so you don’t get three days to recover from your food coma.

Monday is officially Thanksgiving Day, but it’s generally accepted that you can have Thanksgiving dinner at any point during the weekend.

It’s not as big a deal as it is in the U.S. — especially if you’re in Quebec.

Canadians enjoy Thanksgiving and see it as a time to visit with family and friends, but on the whole, they’re generally more low-key about it than we are in the U.S. (They’re not as likely to travel across the country to celebrate with family, for example). In Quebec, Thanksgiving, also called “Action de Grâce,” is even less important; many Quebecers don’t celebrate the holiday at all.

In general, the food served at American and Canadian Thanksgivings is fairly similar. Turkey is usually eaten for Thanksgiving in Canada, though some choose to eat ham, chicken, or other proteins. The turkey is usually accompanied by stuffing, sweet potatoes, corn, gravy, and fall veggies like squash. The standard dessert is pumpkin pie.

It’s not a big shopping holiday.

Canadians don’t have a giant shopping day following their Thanksgiving; the biggest discount shopping day in these parts is Boxing Day, the day after Christmas. However, Canadians have picked up on American Black Friday to a certain extent, and the November discount day, along with Cyber Monday, is gaining ground in Canada. Apparently, it became popular for Canadians who lived near the US/Canadian border to travel south to take advantage of the steep discounts available in the US after its Thanksgiving. In order to encourage them to stay (and spend their money) in Canada, some Canadian retailers have started offering discounts on Black Friday, too.

It’s a big day for hiking and long strolls through the countryside.

For many Canadians, a long walk in the outdoors is an annual Thanksgiving tradition. Because Thanksgiving is in mid-October, it’s the perfect time of year for walking and leaf-peeping. In many parts of the U.S., it’s already too cold by late November to do a lot of outdoorsy stuff on Thanksgiving.

There are official reasons to be thankful, and they can change year by year.

Since the 19th century, Canada has proclaimed specific reasons to be thankful. For many years the reason was simply “Blessings of an abundant harvest,” and for the last 50 or so, the holiday has been celebrated “For general thanksgiving to Almighty God for the blessings with which the people of Canada have been favoured.” However, here and there — especially in the early days — there were more precise reasons, including the “Cessation of cholera” in 1833 and the “End of sanguinary contest in Europe” in 1814.