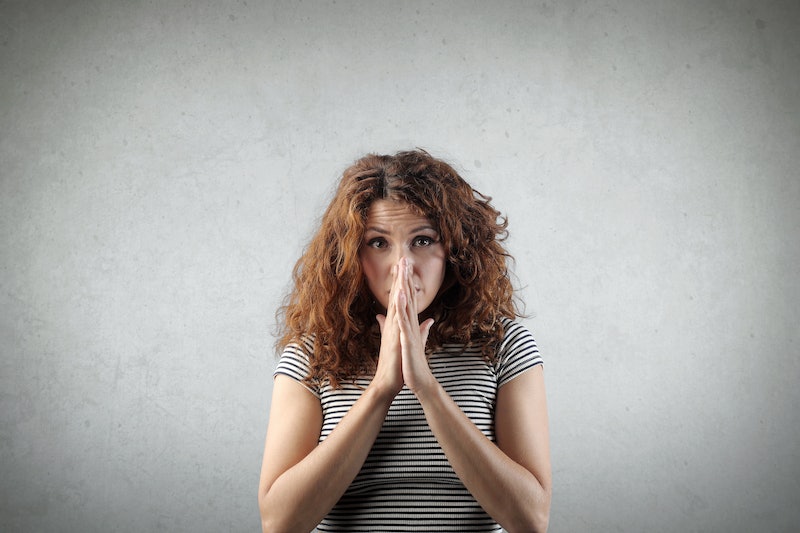 Before we take one single step into the world of discussing the possible symptoms of pregnancy, let this be known: the only way to actually tell if you're pregnant is to take a pregnancy test. If you're experiencing any of the symptoms below and have had unprotected sex in the past several months, don't sit here listening to me run my dang fool mouth; go to your local pharmacy and take an actual pregnancy test (FYI, most pregnancy tests are accurate starting one week after the date of your missed period). Even if you've had sex recently but used birth control, if you're experiencing these symptoms, you might want to take a test — because no form of birth control works 100% of the time, and if you are actually pregnant, the sooner you know, the sooner you'll be able to develop a game plan. So go and get a pregnancy test. Now. You can read this article on your phone on the way, if you want, but do it.

However, if you're someone who's prone to constant pregnancy panics — not because you're engaging in sexual activities that would put you at risk for an accidental pregnancy, but because you're just kind of a nervous person — stick around. An unplanned pregnancy can be one of the scariest things a person can experience, so it makes sense that many of us are preoccupied with them — and that some of us are so preoccupied, we jump to conclusions every time we feel kinda nauseous or have a weird craving for mayo. (Sometimes, it's just because mayo is really good. There is no shame in your mayo game.)

But while classic pregnancy symptoms are certainly experienced by many people, pregnancy isn't the only reason that your breasts might hurt or your period might be late. So if you're a worrier who is prone to pregnancy panics, read on to find out five classic symptoms of pregnancy that don't necessarily mean you're pregnant.

But if you've actually had unsafe sex, have been experiencing any of these symptoms for a prolonged period of time, or otherwise have reason to believe you might actually be pregnant, please, please, please take an actual pregnancy test. I may have a cool vintage lab coat that I bought the year I was Elle Driver from Kill Bill for Halloween, but I am not a doctor, and this article is definitely not to a substitute for real advice from a real medical professional.

What It Feels Like: You might feel your usual PMS symptoms, whatever they might be, but not get your period...or you might feel nothing, and get surprised when you look at your calendar and see that your crimson tide is overdue.

Why This Is A Sign Of Pregnancy: The entire process of your period is based around not being pregnant — when you don't have a fertilized egg implant in your uterus over the course of a month, your uterus shrugs, sloughs off its lining, and decides to try again next month. Voila, period!

When a fertilized egg does implant, your uterine lining is busy, and thus is not coming out of you in the form of a period.

What It Could Also Be: According to Dr. Janelle Luk, MD, reproductive endocrinologist and medical director/co-founder of Generation Next Facility, there are numerous reasons a non-pregnant person might not be getting their period. "Several common reasons for a late period include stress, low body weight, obesity, different hormonal syndromes, birth control, and chronic diseases," she tells Bustle. Some of the chronic illnesses that can lead to irregular periods include thyroid conditions like hypothyroidism, polycystic ovarian syndrome, and celiac disease (in fact, missed periods is a symptom of celiac disease, according to the U.S. Department of Health and Human Services).

So if your periods are consistently irregular, it's worth talking with your doctor — they may be able to test you for one of the above health issues or a different one, and keep you from having to go through a monthly freak out every time your period is running a smidge late.

What It Feels Like: You breasts may ache, feel tender whenever you touch them, or have that stretched-out "water balloon that has been overfilled to the point of almost bursting"-type feeling.

Why This Is A Sign Of Pregnancy: According to Luk, "Pregnant women‘s breasts become tender because of the increased level of progesterone that causes swelling and soreness."

What It Could Also Be: Breast tenderness, however, can mean many other things. According to the U.S. National Library of Medicine, PMS — the exact opposite of pregnancy! — can cause breast pain, as can menopause, excessive coffee consumption, breast infections like mastitis, and pulling a chest muscle while exercising. Your breast pain could even be caused by wearing an inadequately supportive bra.

So it pays to get familiar with your own body— for example, I know that if I skip a placebo week on my birth control pills and go straight into the next pack of active pills, I get aching breasts for the entire month. Knowing what makes your own breasts feel tender can help save you a lot of worry in the end.

What It Feels Like: Suddenly, for no obvious reason, you feel like you absolutely must eat some food you've never really cared about. Alternatively, you might suddenly find a food you always liked to be completely repellant.

What It Could Also Be: Luckily for all of us, developing a sudden and random obsession with beets, or sardines, or pizza with hot sauce on it does not necessarily mean that you're pregnant.

In fact, according to the scientific journal Appetite, 97 percent of women and 68 percent of men have experienced food cravings in their lifetime. Contrary to popular belief, food cravings don't usually have to do with nutritional deficiencies (or you'd probably be craving, you know, kale). Rather, research has actually tied cravings to having a monotonous diet — so you're craving pizza not because your body needs a heaping helping of Vitamin Melted Cheese, but because you've grown sick of your sad desk salad.

If you're having a lot of food cravings, again, talking to your doctor is a good place to start — you might be craving specific foods to help cope with stress or similar problems.

What It Feels Like: No matter how much sleep you get, you constantly feel like you just pulled an all-nighter.

Why This Is A Sign Of Pregnancy: According to the American Pregnancy Association, hormonal changes are the culprit behind the flat-out exhaustion that many people feel in the first trimester of pregnancy — progesterone plays an especially large role in this. But it isn't only hormones; pregnant bodies produce more blood and experience drops in blood sugar and blood pressure levels — all of which can make you feel tired all the time.

What It Could Also Be: More like "what couldn't it be," right? Almost half of Americans are chronically underslept — 40 percent of us get less than seven hours of sleep a night, according to a 2013 Gallup poll. People struggling with thyroid disorders, Type 2 diabetes, sleep apnea, depression, anxiety, and other health conditions might especially struggle to get enough sleep. And people who are taking certain medications that can cause drowsiness might feel like they need an extra nap or 10. If you suddenly begin to experience fatigue, tell a trusted medical professional — but know that it's not a definite sign of pregnancy.

What It Feels Like: Your stomach may churn or feel unsettled; if it's quite bad, you may feels muscles in your throat involuntarily moving, you might retch, and yes, you may actually puke.

Why This Is A Sign Of Pregnancy: Doctors believe that pregnant people can become frequently nauseous — a condition known as "morning sickness" — due to hormone fluctuations. In fact, some medical professionals have theorized that morning sickness can be a sign of a healthy pregnancy.

What It Could Also Be: There are, unfortunately, many things out there that can make you feel literally sick to your stomach. "Waking up nauseous does not necessarily mean you are pregnant," says Luk. "If you have low blood sugar or you are simply hungry, you may wake up feeling nauseous; if you have gastritis, one can also feel nauseous."

Some people feel nausea due to causes ranging from vertigo (a disorder of the inner ear that can also make people feel dizzy), to viral infections, to food poisoning, food allergies, and reactions to medications, including some birth control pills.

Again, this is another case where paying attention to your body, and how it acts in various scenarios, can be helpful — in college, I once had a pregnancy scare because I seemed to get nauseous every morning; it later turned out that I simply couldn't tolerate digesting a large multi-vitamin on an empty stomach (which I was attempting to do every morning).

If you've been engaging in sex that could make you pregnant and are experiencing any of these symptoms, do not blow them off.

However, it is important to know that pregnancy isn't the only thing that can make our bodies start acting up in unusual ways. And that if you feel weird nausea or food cravings even though you haven't engaged in any kind of sexual activities that can result in pregnancy, it doesn't mean you've been in contact with some kind of magic ghost sperm. Calm down, and go talk to your doctor if your symptoms persist or get worse. You might be glad you did.

But seriously, if you're having unsafe sex: stop it! Reading articles about pregnancy is definitely not an effective form of birth control, OK?

More like this
An Expert Weighs In On The Viral Raw Carrot Salad Trend
By Alexis Morillo
How Ovulation Affects Your Sense Of Smell, Libido, & More
By JR Thorpe and Lexi Inks
The 8 Best Crystals For Meditation, According To A Healing Energy Practitioner & Meditation Teacher
By Lauren Moison
Here’s Your Daily Horoscope For January 31, 2023
By Mecca Woods
Get Even More From Bustle — Sign Up For The Newsletter
From hair trends to relationship advice, our daily newsletter has everything you need to sound like a person who’s on TikTok, even if you aren’t.

This article was originally published on November 18, 2015