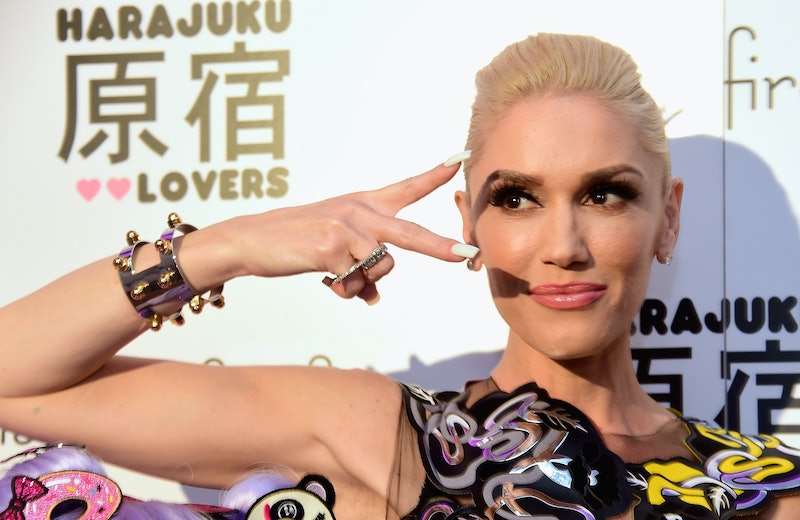 Like anyone still struggling to deal with the aftermath of a painful break up, Gwen Stefani is still hurting through the memory of her relationship with Gavin Rossdale. As a musical artist Stefani has spent a career openly using her personal life as a creative springboard for developing songs and inevitably that's left her with a back catalogue scattered with the ghost of the 13-year love affair with her ex-husband.

In an interview with Fresh FM's The Tommy Show, Stefani said of songs she'd written about Rossdale, "Because of my situation right now, which we all know what I'm talking about, I feel like I go back and listen to a lot of that stuff and I'm, like, I get sick. You look at the songs and go, 'That was a red flag. That was a moment where I was feeling just as bad as I feel today, and why did I keep it up?" Ouch.

Though Stefani has been careful in her career to not always definitively point the finger in any one particular direction when it comes to who or what has inspired certain songs (with the exception of "Don't Speak", which was famously written about the break up of her relationship with band member Tony Kanal), it's easy to theorize which No Doubt songs were written about her relationship with Rossdale and to see that their relationship, like anyone's, wasn't always the easiest. But which songs was she talking about in that radio interview? I have a few ideas...

There's no tip-toeing around this one, taken from 2000's Return Of Saturn, "Ex-Girlfriend" is explicit in it's heartbreak and also in it's direct attack on Bush front man Rossdale with the Bush song lyric 'I'm doing you in tomorrow/ I'll burn before I mellow' from "Dead Meat" used as the foundations for Stefani's forthright, snarled line, "You say you're gonna burn before you mellow/ I will be the one to burn you." At it's heart, the song is about knowing deep down that you're completely incompatible with someone who you're madly in love with and breaking up as a result. But the real clincher comes at the pivotal moment where Stefani confesses that she's "the most gorgeously jealous type of ex-girl" and perhaps one who won't give up without a fight.

In all honesty, I've always been a little unsettled by this song. On first listen it sounds like a straightforward love ballad, but dig a little deeper and you'll discover that it's full of insecurity, back-handed compliments and an overall bittersweet tone. The song was apparently written by Stefani following one of her many visits to London to see Rossdale, having written a journal entry about a day they spent in the park together, causing her to observe that he was "really lovely underneath it all." With other lyrics referencing a "temper" and that the object of her affections knows "some real bad tricks," the line in which she speaks about being "full of forgiveness" is genuinely more than a little devastating.

"So why do we choose the boys that are naughty?/ I don't fit in, so why do you want me?/ And I know I can't tame you but I keep trying," Stefani sings in the distractingly upbeat anthem of insecurities, "Bathwater." It's a theme that Stefani returns to time and again in her music, of feeling completely insecure in a relationship and of wanting to change her lover's ways in return for her own peace of mind. If, as the song suggests, Rossdale was the subject of this song (a man "wanted and adored" by a "bountiful selection" of beautiful women) then it makes the alleged circumstances surrounding their divorce less than surprising for the No Doubt singer.

Stefani and Rossdale had a long distance relationship for a long time before they finally decided to share a permanent one together in America. "Home Now" is the perfect snapshot of, not just the primitive stages of their relationship, but of the power struggle involved in all relationships which requires a couple to make some sort of a sacrifice in order to successfully achieve an enduring commitment.

Stefani sings, "So, what you giving up for me? And what I shall I give up for you? Aimless expectations passing by," highlighting the fact that it's not enough to only make a commitment if you're not willing to put that commitment into action, too.

Stefani's comments about "feeling sick" at hearing uncomfortable truths in her old songs are a boldly comforting move for those of us who are maybe in the midst of a rocky relationship ourselves or are in the middle of a fresh breakup. Sometimes there are warning signs throughout a relationship that someone is just not right for you and if we've chosen to ignore those signs in favor of giving it a go anyway, then we can feel foolish when we're eventually proven wrong. But, keep heart; Stefani is proof that you can survive anything so long as you keep your head held high in the knowledge that you at least tried.