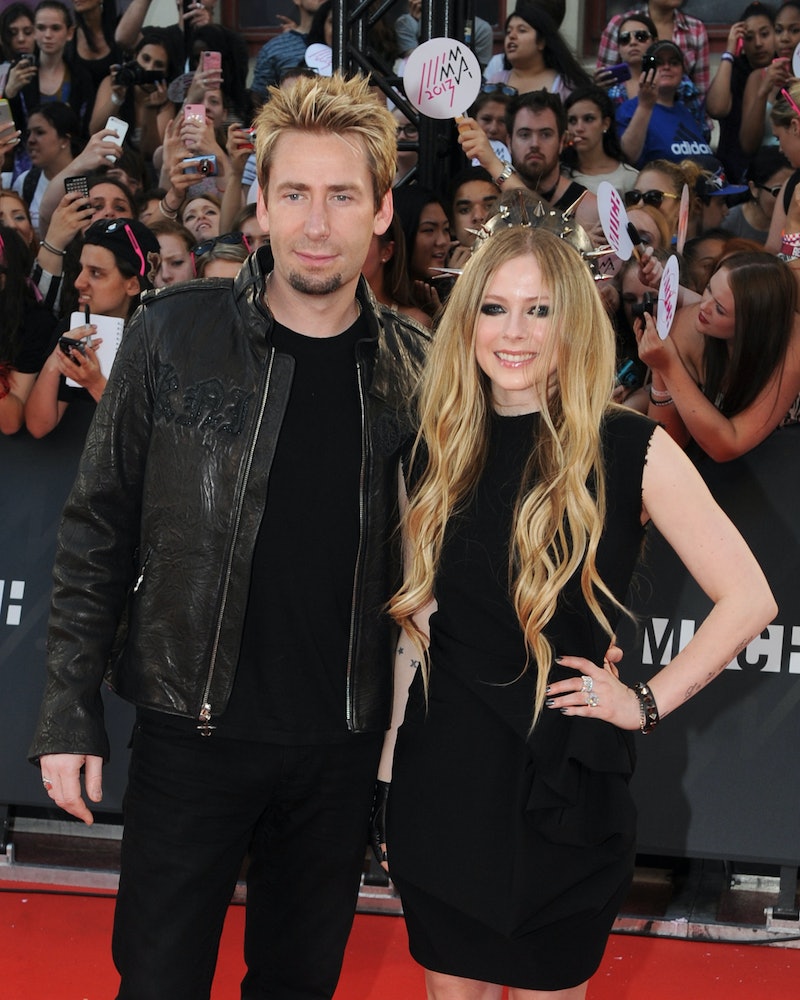 Celebrities don't always have it easy in the love department. When you work with so many fine-looking creative types each day, it must be simple to find people with whom you want to hook up, but that doesn't necessarily mean your relationship is going to stand the test of time. Regardless, if you meet on set, enjoy a hot and heavy off-set romance, and then break up in a truly spectacular fashion that makes the covers of every gossip mag in the country, your crew isn't exactly going to let you off the hook and recast your ex's part so things aren't awkward. Same rule applies in the music industry. Avril Lavigne and Chad Kroeger broke up last month and are back in the studio working on a project together, according to People. Yes, that soon. Call them the most mature dysfunctional couple in the universe because how many people who have just had their hearts broken could do the same?

At the end of the day, celebs are paid big bucks for their acting skills and musicianship — and, whether their personal relationships succeed or fail, the bills are going to keep coming and the mortgage payments are going to continue to be due on the same day each month. The show must go on — and the show did go on for these seven celebrity couples who kept a working relationship after their love died.

Theirs is a fresh wound — the "Sk8er Boi" singer and her Nickelback husband were married for about two years before announcing their separation in September. But their respect for one another is obviously off the charts because they are able to put any animosity (if any even exists ) behind them in order to record new music together in a studio. It seems these two realized they make better friends and professional partners than spouses — and there's nothing wrong with that.

Nina Dobrev and Ian Somerhalder were co-stars on The Vampire Diaries and friends before they started dating. They were together for about three years and, when things didn't work out and they split, fans of the show probably wondered whether that meant doomsday for their on-screen characters, as well. But both actors maintained a professional relationship until Dobrev left the show this spring. Plus, even when Somerhalder married Nikki Reed after less than one year of dating, Dobrev told ET she was happy for them and it wouldn't affect her work: "I've said this before, that we didn't break up because anything bad happened or because there wasn't love or friendship. I love him and the friendship is still strong and I think he's great and I care about him. And that didn't change. Yes, we're professional and that's fine. We were friends long before we dated and we still are now."

Their characters on Gossip Girl were hooking up just as Blake Lively and Penn Badgley began realizing, off screen, that they dug each other, too. Sadly, the couple broke up, but had to keep playing Serena and Dan as if they were very much in love. All of this craziness led Badgley to admit on Watch What Happens Live that Lively was his best and worst on-screen kiss: "I'd say best... I'll say it was Blake, because we actually had a relationship at the time." When asked about his worst kiss: "Maybe Blake after we broke up."

There was nothing awkward about Cameron Diaz and Justin Timberlake's reunion in the 2011 film Bad Teacher , even though the two dated for three years before calling it quits in 2006. The two have moved on and seem perfectly content working together, praising each other, and poking fun at one another, as Diaz proved in an interview with US Magazine when she said: "No, it's great. Justin and I have always had a good laugh together, and to make a movie where we get to have a laugh together, and there really was no one else who was more perfect for this part." She added: "He's frickin' weird in movies. He's so bizarre and hilarious. I say that with great respect to his character and what he's done!"

The Twilight movies and Kristen Stewart and Rob Pattinson's relationship became intertwined in fans' minds, creating a very awkward scenario when Stewart cheated with director Rupert Sanders and then had to take the show on the road with ex Pattinson in order to promote Breaking Dawn. At the time, a Breaking Dawn extra named Amanda Dyar said Stewart and Pattinson were attempting to reconcile because, "They believe that working their relationship out will make a lot of things easier, including the promotion." Sounds logical, but that certainly didn't last. At the end of the day, work is never a good enough excuse to get back together.

When you're in a band as successful as No Doubt was, you don't just break up because you're no longer dating another band member. Gwen Stefani and bassist Tony Kanal started dating in the late '80s, then broke up seven years later in 1994, just as they were preparing to tour for Tragic Kingdom. Kanal admitted to The Guardian that it was extremely difficult to keep a band going under those circumstances: "We were on tour for Tragic Kingdom for 28 months. We were going through the breakup, and in every interview we were talking about it so we were opening this wound on an hourly basis. It was so brutal but I don't know how we made it through."

Stefani, who penned the songs "Don't Speak" and the more positive "Cool" about her time with Kanal, says she comes away from the experience learning an important lesson: "Before, I was really passive, all I cared about was being in love with my boyfriend. I didn't have any creative power, nothing. I don't know that person any more. But I'd been really bad at school and didn't know what I would do, I just sang in my brother's band [Eric Stefani, who founded the group, left No Doubt after Tragic Kingdom to work on The Simpsons.] But after the breakup I just started writing all these songs and suddenly I was: 'Oh I think I'm really good at this!'"

One Tree Hill's Sophia Bush and Chad Michael Murray met on set, fell head over heels in love, and then, in 2005, seemed to rush to the altar without thinking because they split up just five months after exchanging vows. The biggest problem was that they still had a hit TV show to think about and had to continue shooting scenes together until the show ended in 2012 (Michael Murray left the show and then returned in the last season).

There doesn't seem to be any love lost between the couple, as Bush revealed on Watch What Happens Live, but the actress explained that they still had a job to do after their break-up: "At the end of the day, we're grownups, and I actually think it's interesting that when people split in a way that's unpleasant, they usually just go on quite literally hating each other — or the person in my situation hates the other person, whatever — but when you have to work with somebody for another half a decade, you kind of have to deal with it. Because for me, at the end of the day, my job is my priority. And so I think at the end of it, it really let me just let go of it."

Can you imagine having to confront someone who broke your heart day after day for the sake of your paycheck? Then again, this is celeb pay we're talking about here — well worth the heartbreak.