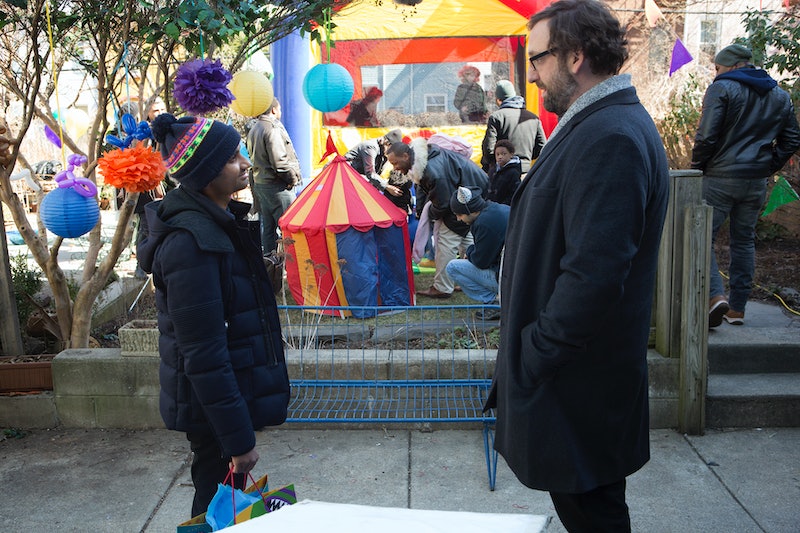 Who are the most "masculine" characters on television right now? Rugged and headstrong leaders like Jon Snow of Game of Thrones and Rick Grimes of The Walking Dead may come to mind. On other shows, there are slick and charming men in power like Lucious Lyon of Empire or Frank Underwood of House of Cards. Television even has superheroes ranging from buff and strong (Arrow) to sneaky and smart (The Flash) and every type of traditionally "strong" man in a different cop role on every television network. But for all these paragons of masculinity, flexing their muscles and sacrificing themselves for the ones they love, the most accurate portrayal of masculinity you'll see anytime soon is on Master Of None , because there isn't much of what is usually defined as traditional, stereotypical "masculinity" in the show.

On most other television shows, characters like Dev and Arnold — men who are shorter or taller than average, not especially muscular, and have more interest in brunch than sports — would probably be nerdy dudes who don't know how to talk to girls. The would get jealous of the cool guys in the world who could date anyone they wanted. They would go home after work and play video games, make witty Star Trek references, and the audience would laugh. On Master of None, however, it's not getting a date that's a problem — what matters is how the men feel about who they're on a date with. Aziz Ansari's Netflix series is a comedy, but it's not interested in the fantastical Alpha-Male/Beta-Male dynamic that many sitcoms about dating have relied on. Instead, Master of None talks about masculinity in a way that no other television show has — by not talking about it.

Many sitcoms rely on archetypes of masculinity to find humor. The guys of The Big Bang Theory are constantly trying to transcend their nerdiness to be closer to the male action heroes they grew up admiring. The entire run of Two and a Half Men relied on the fact that one of the men is a confident womanizer, and that the other is "soft." More nuanced sitcoms like How I Met Your Mother, the pinnacle of 21st-century rom-sitcoms, still played with the drastic ends of masculinity for humor. HIMYM featured a womanizing alpha-male personality (Barney), a sensitive man who has only ever been with one woman (Marshall), and an emotionally stunted man-child who thinks finding a wife will solve all of his problems (Ted, who is the worst). Master of None explores these aspects of masculinity as well, but not because three characters with these traits are all discussing their views. Instead, Dev has qualities of all these archetypes, which together create a fully-realized and conflicted character.

Dev, much like his actor and creator Ansari, is a short-statured Indian-American man with a high-pitched voice. Societal stereotypes would tell us that Dev should not be a masculine character. He's short, which means he's supposed to feel less valued than a taller man. His high-pitched voice is a far cry from the low, preferred masculine voice of many protagonists. On top of that, he's Asian-American, which comes with a long history of discrimination in the media and being portrayed as "less-than." Yet on Master of None, he's a fairly well-adjusted commercial actor who doesn't struggle with getting dates or feeling comfortable with who he is as a man. There isn't a single moment in Season 1 where Dev, or any of the other characters, do anything with the goal of becoming "manlier." Dev is still flawed in many ways, but none of them are related to that type of insecurity, and he's never thrown by being caught doing something supposedly un-manly, like Instagramming a picture of a frittata (which, to be fair, was "fluffy as hell").

This is a sharp contrast to not just other shows on television, but modern culture as a whole. The phrase "man up" is commonly used as a way of saying "toughen up" whenever someone is having difficulty facing a task or showing emotion. They are told to "man up" because men are not to be weak. They're told to "grow a pair," because someone with testicles isn't allowed to be afraid, apparently. Prominent male characters in television — from Mad Men's Don Draper to Parks and Recreation's Ron Swanson and beyond — are often defined by an inability to truly express themselves, shackled by the notion that men aren't allowed to be emotional. This is a problem that Dev and Arnold are never faced with throughout the entire first season of Master of None, as they both appear to be fully in-tune with their emotions, because they don't buy into the problematic ideals of traditional masculinity.

In Episode 8, "Old People," Dev and Arnold are the focus of two separate plots that any other show would use to mock its characters, but Master of None chooses not to apply those common societal expectations related to gender roles. Dev ends up spending a long afternoon with his girlfriend's grandmother, and instead of being embarrassed to be seen alone with an old woman who isn't his own grandmother or being bored by her stories, Dev is enthralled with learning about her history. He talks about his love of pasta and enjoys relating to a woman who he has no sexual interest in.

Arnold, in the episode's other storyline, forms a relationship with a PARO seal, a stuffed robotic animal meant to provide company to senior citizens. The easy joke here would be that others mock Arnold for his friendship with his grandfather's stuffed seal, but Master of None doesn't make the easy joke. Instead, the joke becomes that everyone loves PARO, even if they don't think they will. No one is weak for loving PARO, because how could you not? Arnold's problem isn't that he's not "manning up" — because that isn't a problem to begin with.

The only male presence in the show that seems to subscribe to traditional "masculine" ideas is Derek, the man at the bar who hits on Diana and follows her home. Derek's ideas of masculine tradition come across in his approach towards Diana. He "provides" something to Diana (a drink) and expects to be rewarded for acting in a manner that men have been for centuries. A character like Derek would probably be rewarded for his actions (pre-stalking) on a show like Entourage or We Are Men. However, Derek's bastardized masculine ideals — and the predatory actions he takes because of them — are a realistic interpretation of the dangers of a world where human worth as a male is tied to how sexually appealing he is.

For Derek, masculinity appears to be very cut and dry, and directly linked to heterosexuality. "I am man. She is woman. Men have sex with women. If women do not have sex with me, I am not a man." Traditionally masculine men on television are often defined by their sexual activity. Don Draper, Barney Stinson, and New Girl's Schmidt are all primarily defined by their relationships (or lack thereof) with the women they sleep with, and assert their manhood by "collecting" as many intimate partners as possible, objectifying women in their own pursuit of male dominance. This is a sharp contrast to Dev and Arnold, who date and sleep with women, but it's never for a need of "conquest" or establishing power. It's because dating and sleeping with people can be fun, and sometimes lead to something more.

Dev, Arnold, and the other men of Master of None aren't one-dimensional archetypes fitting into some kind of Alpha-male or Beta-male dichotomy. They're fully developed characters who have bigger things to worry about than perceived masculinity. Not because masculinity is complex or complicated, but because "masculinity" doesn't really mean anything. Masculinity defines a series of traits that help enforce culturally enforced gender roles which are growing increasingly obsolete. Master of None does more than subvert masculinity, it straight up ignores it and by doing so, makes a massive statement about masculinity on TV — that a man doesn't need it to be a man.