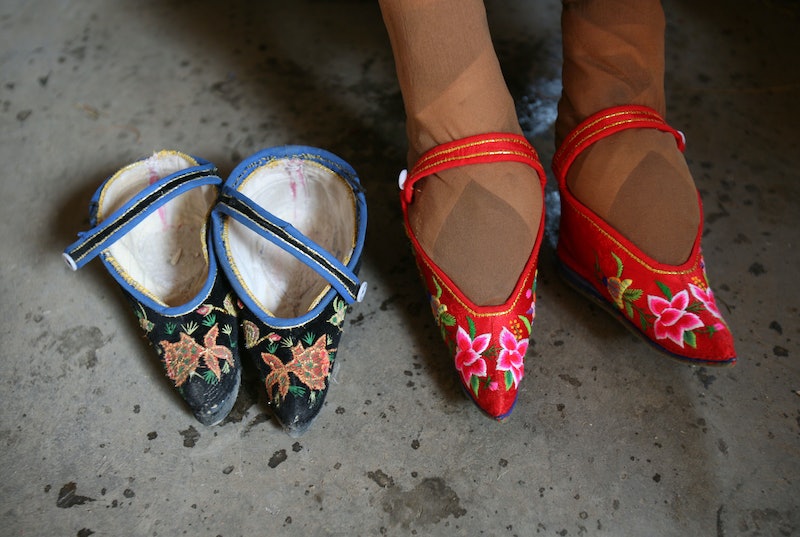 When it comes to the fight to look ferociously good, the ancient adage "no pain, no gain" has never rung more true. From waxing legs and tweezing eyebrows to fish pedicures, surgical facelifts, skin needling, and liposuction, painful beauty trends are all too common.

However expensive, time-consuming, and uncomfortable many contemporary beauty trends may be, though (hello Kylie Jenner lip challenge) we can at least rest safe in the knowledge that they aren't usually life-threatening. The funky lipstick we're swiping on or the contouring we're perfecting aren't really landing us in hospitals, right? But the same cannot be said of the restrictive, skin-irritating crinolines of the Victorian era or the lung-constricting corsets introduced in the 16th century (famed for their ability to cause indigestion, constipation, breathing difficulties, and even internal bleeding). Similarly, the quests for fair skin and society-appeasing feminine frames have been littered with painful pitfalls for thousands of years.

However, if you thought corsets were crazy, hold onto your comfy shift dress, because that's definitely not the worst of it. After perusing this lethal list of beauty treatments, that clown contouring you ill-advisedly tried to nail before last week's Sunday brunch will seem like a walk in the park.

How do you banish fat, "the enemy that is shortening your life?" Why, with "sanitized tapeworms, jar packed," of course. Thus was the seductive tagline attached to a vintage tapeworm diet advertising poster, which advocated for the supposed benefits of consuming tapeworms to stay trim without modifying your food intake or exercise regime.

Funnily enough, The Tapeworm Diet also came with some unfortunate downsides. According to the BBC, after swallowing a number of tapeworm cysts in pill form (then enduring a nice bout of vomiting and diarrhea to reach their desired weight) the lucky dieter would then need to excrete the tapeworm, which could lead to abdominal and rectal complications.

As BBC reported, the ingested tapeworm could also grow up to 30 feet in length, and in doing so, cause a range of health problems from headaches and eye issues to epilepsy, meningitis, and even dementia. Thankfully, the Tapeworm Diet is officially banned in many western countries today, including the U.S. and UK. Many researchers even claim it was a myth; and to be honest, I sincerely hope that it was.

Enthralled by the magic of wonder-product mascaras, foundations, and lipsticks? Well, it turns out that when it comes to on-point makeup application, things used to be further enhanced through one vital product: The Beauty Micrometer. According to this vintage ad, it was perfected by Max Factor in 1934. This hideous contraption was designed to "accurately register actors' facial measurements, and discloses which features should be reduced or enhanced in the makeup process."

Thought you were relatively A-OK with the way your face looked? Not on the Micrometer's watch. As the ad reads, "Flaws almost invisible to the ordinary eye become glaring distortions when thrown across the screen." Not only were the screws oftentimes painfully tight, but just think of all the psychological damage...

In complete contrast to the modern aspiration for a perfectly whitened set of teeth, tooth blackening or "Ohaguro" is the custom of dyeing your teeth black. It was practiced in Japan as an aristocratic sign of beauty for hundreds of years, from the Kofun until the end of the Meiji period. Teeth were commonly blackened as a coming-of-age ritual, in particular for young women.

The process was long and arduous, took around a week, and required multiple applications of dangerous chemicals to a child's teeth every day. Although lacquering teeth in this way did pose the benefit of helping to prevent tooth decay, wearers would often suffer very painful allergic reactions to the chemicals, leading to the banning of the practice in 1870 by the Japanese government.

Want to recreate the illusion of eight hours of undisturbed slumber after a gin-fueled night? Let me introduce you to the 19th century trend of Arsenic eating. According to Mental Floss, it was consumed to produce "a blooming complexion, a brilliant eye, and an appearance of embonpoint" (aka busty). The Arsenic diet was a regular feature in any self-respecting Victorian dieter's arsenal. Even though it could lead to arsenic poisoning and symptoms such as diarrhea, vomiting, bloody pee, cramping muscles, hair loss, stomach pain, and convulsions.

The diet also came with some very important rules. Mental Floss went on to report that arsenic should only be taken when the moon increases in size; you should start by taking just one pill a time (until you build up a resistance); and then you could never stop taking the toxic drug unless you wanted to die.

Thought to have originated in Imperial China among upperclass court dancers in the 10th and 11th centuries, foot binding eventually spread to all classes, and was seen as a method of displaying status. The resulting wobbly, doll-like walk suggested the person was too wealthy and valuable to undertake manual work.

In an effort to transform the bounded's feet into "golden lotuses," mothers would fold the toes of their 2-year-old toddlers under their feet and tie them as tightly as possible. The process was extremely painful, and permanently crippled the wearer. However, foot binding wasn't completely eradicated until the Communist Revolution in 1949. To this day, many elderly Chinese women suffer the repercussions of the practice.

In the 16th and 17th centuries, a variety of diseases were rife, even for the wealthiest of people. Even if you managed to navigate your way to adulthood without succumbing to illness, you'd probably still have a mass of pox scars to show for it. Women saw these pox scars as unsightly imperfections, and the cheapest way to cover said imperfections was by using a lead face powder, allegedly made popular by Queen Elizabeth I according to New York Magazine.

In addition to being affordable, the powder was quick and easy to make, provided even coverage, and had a silky matte finish. However, prolonged use also caused brain swelling, paralysis, and eventually multiple organ failure. I guess you can't win 'em all.

Known to Italian women as "Belladonna" or "beautiful woman" in the 19th century, women would squeeze eye drops prepared from the deadly nightshade plant directly into their eyes to dilate their pupils, giving the illusion of wide-eyed purity and innocence. Unfortunately, your beauty would've come at a price. Namely, heart palpitations, loss of the ability to focus on close objects, and eventually complete blindness.

You likely rely on Lysol to keep your bathroom and kitchen spick and span. So why not employ the same technique to your nether regions? According to Jezebel, condoms and diaphragms were expensive and difficult to source during the first half of the 20th century. So douching was commonly advertised as a cheap and effective alternative.

Lysol was the most commonly used douching brand. But at the start of the 20th century, antiseptic soap could also contain cresol, "which was reported to cause inflammation, burning, and even death," as Jezebel reported. Even so, Lysol continued to be marketed as "safe and gentle enough" for women for years.

If corsets and waist training seem like far too comfortable methods of achieving a slim waist, then why not consider this slightly more committing alternative? You know, removing your floating ribs entirely to achieve an unattainably narrow waistline. And the worst thing? This practice is still alive today, with famous American actress Amanda Lepore claiming to have undergone the procedure in Mexico. Suddenly, that waist belt might not seem so uncomfortable.

While there still exist painful beauty practices today, I think we can all be grateful to have non-bound feet and lead-free faces.