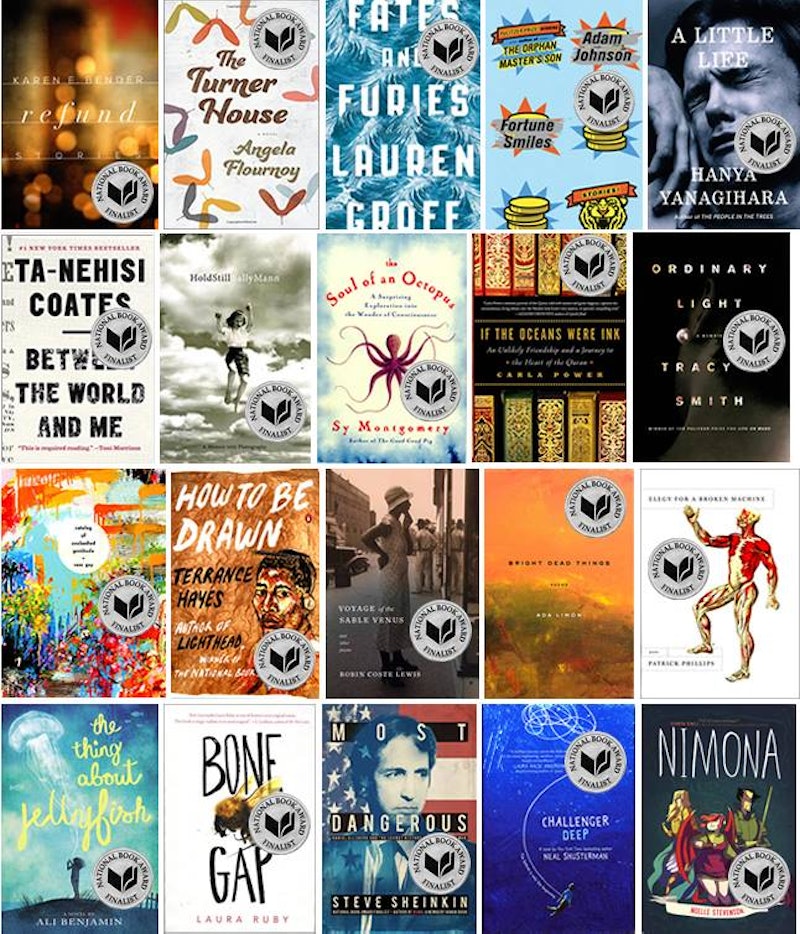 Live from New York on Wednesday night was the ceremony to announce the 2015 National Book Award winners. Hosted by American writer and satirist Andy Borowitz — who started the evening by joking "what the f— is the National Book Foundation?" — the ceremony handed out the awards for the best of the year in fiction, nonfiction, young people's literature, and poetry. And this year was an absolutely massive win for diverse voices in literature.

In a world when we still (still!) have to call out award committees for having largely white, male longlists and shortlists, it was positively thrilling to see three out of the four awards handed out to black writers. Not only that, but the winners tackled issues like mental illness, racism in modern America, and the black female experience through history.

There were certainly upsets (*cough* the National Book Award for Fiction *cough*) but in general it was an exciting ceremony with heartfelt acceptance speeches — we're all admitting we teared up, right? — and what more could you want from a celebration of books, writing, and literature? (OK, we'd all love to see a few more women on the podium accepting, but nevertheless.)

Enough about the ceremony. Here are the 2015 National Book Award winners:

Every single writer on the fiction shortlist is a first-time finalist for the National Book Award, so it was exciting no matter what, but it was a clear surprise win for Adam Johnson. He even joked that he told his family not to fly into the ceremony because it wasn't going to happen for him this year. The No. 1 buzz book of the shortlist was Lauren Groff's Fates and Furies, and it was definitely exciting to see four female voices of the five on the shortlist. However, never count out a Pulitzer Prize-winner, and Johnson's collection of stories, ranging from post-Katrina Louisiana to Berlin to Palo Alto, were certainly stunning.

The award beat out these four finalists in fiction:

Nonfiction: Ta-Nehisi Coates, Between the World and Me (Spiegel & Grau/Penguin Random House)

If there was ever a lock for a National Book Award it has to be Ta-Nehisi Coates for his astounding Between the World and Me . The book isn't just having a moment, it's having a year. In his acceptance speech, Coates said the book — constructed as a letter from a father to a son about being black in America — comes "out of a very, very real place." Inspired by "the death, the murder, the killing" of Coates' friend Prince Jones by a police officer, Between the World and Me is a vital story for today's culture. Thankfully, the NBA committee thought so, too.

Coates' nonfiction book overcame these other four on the shortlist:

There wasn't a dry eye in the house (or from my computer) when Neal Shusterman brought his son Brendan up to the stage to share his National Book Award for Young People's Literature with him. Brendan contributed his own artwork to his father's now-winning YA novel, and it's art he created while experiencing schizophrenic episodes.

Challenger Deep , Shusterman said, was written and published to remove the stigma of mental illness and to show people that they aren't alone. He described his experience with mental illness alongside his son:

It was an award exceptionally earned, for a novel that you could practically feel Shusterman's heart beating out of the pages. Author of Dark Water Laura McNeil presented the award, and Challenger Deep beat out these other great YA novels on the shortlist.

Robin Coste Lewis (deservedly) beat out front-runners Terrance Hayes and arguably Ross Gay with her debut collection Voyage of the Sable Venus , which she published while she was still a student. (So, prepare to feel bad about yourself and your accomplishments now.)

Coste Lewis won out over these other four contenders for the prize:

Also at the ceremony, A School Leader's Guide to Excellence's Carmen Farina gave out the Literarian Award to James Patterson — who quipped "Let's all be literarians, whatever the hell that means" — for his contributions to literacy for middle school children. A Visit from the Good Squad's Jennifer Egan handed out the Medal for Distinguished Contribution to American Letters to Don DeLillo, who came to the stage amid a huge standing ovation, and proceeded to accept his award with nothing less than poetry.

Now, let's all get to reading.