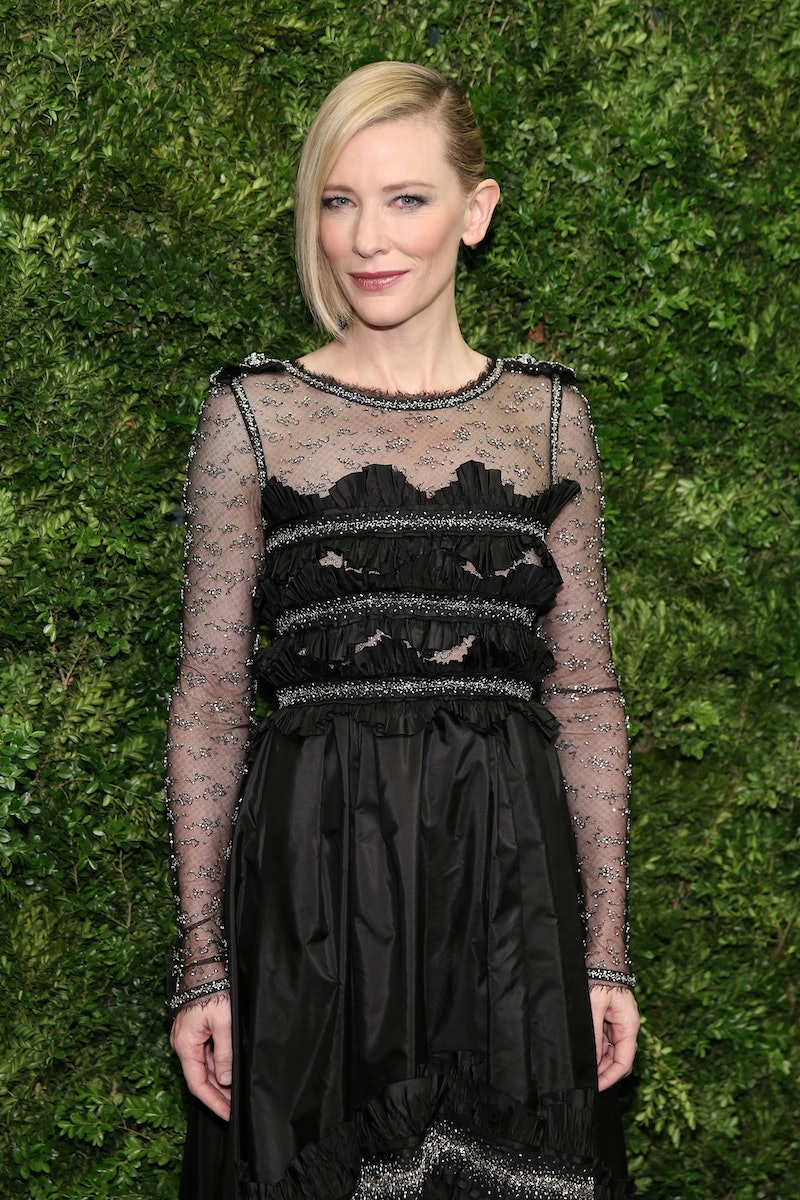 Cate Blanchett is a goddess. I know this, you know this, and surely the makers of American Horror Story also know this. She's not only exceptionally talented, but wow, if she isn't also stupendously beautiful, as well. Fans of AHS are well acquainted with the fact that the show loves to feature a prominent selection of enormously talented women — at any one time on the show you can see such massive talents as Jessica Lange, Kathy Bates, Sarah Paulson, and Angela Bassett — so why not also feature an acting heavyweight like Blanchett in an upcoming season of American Horror Story ?

It's an idea that the double oscar winner is actually very open to. In an interview with Vulture, Blanchett mentioned how much she loved working with her Carol co-star (and AHS regular cast member) Paulson, saying "She’s brilliant. I’ve long admired her onstage and onscreen, and it was such a pleasure to work with her. In every gesture and every look, she just speaks volumes." When asked whether she'd ever consider starring in AHS, Blanchett said, "Yeah, if [Pauslon] asked me".

I don't mean to get ahead of myself here and over excited about all of this, but I'm totally getting ahead of myself and getting over excited about all this. Can you really blame me? Over the years AHS has had some truly exceptional guest stars, and Blanchett would make for a perfect addition to that ever extending list. Whilst we dream of what could be, let's take a look at some of the best AHS guest stars so far.

Perhaps the ultimate guest appearance on AHS ever, the Fleetwood Mac singer appeared in Coven as herself and it was just as magical as we all could have ever imagined.

Modern Family's Stonestreet had a memorable (and pretty scary) role in Murder House as a man trying to work his way through a deep fear of urban legends. A positive therapy session lead to Stonestreet's character facing his fears only to be killed for it (though not in the way that fans were at all expecting).

Everyone's favorite token "oddball" actress of '90s and '00s teen films, DuVall had a minor but vital character arc in Asylum as the determined girlfriend of the illegally incarcerated Lana Winters (Paulson).

Mara plays fiendish and scheming so well that I really hope she returns to the AHS fold for a second round of despicable fun. As the manipulative mistress of Dylan McDermott's Ben in Murder House, Mara brought an endless and attractive threat to the show in the form of a woman who simply didn't know when to quit — even after death.

Best known for his roles in Deadwood and Game of Thrones (or, British readers, for his lead role in the '80s and '90s comedy drama show Lovejoy), McShane is no stranger to playing dark roles in violent shows. His role in Asylum, as a psychotic inmate on a festively themed killing rampage, proved that McShane had no plans on slowing down his prolific descent into shows of an arcane nature.

Who knew that AHS and Maroon 5 could make such happy bed fellows, but Levine actually fit the bill perfectly. As one half of an amorous couple caught breaking into the abandoned Asylum of Season 2, Levine met the sort of brutal end that many a handsome face has experienced in numerous horror films before him.

Which brings us to the second half of that couple, Dewan-Tatum got to enjoy some racy moments with Levine before being forced to run for her life. Obviously, it did not end well (because as we all know, there's few things which can be successfully outrun on AHS).

As historic murder victim Elizabeth Short (also known as The Black Dahlia), Suvari played the tragic and horrific role of one of the most memorable flashback sequences of Murder House with a classically powerful presence.

You might have recognised Gummer during her Freak Show narrative as being the slightly more successful best friend to Greta Gerwig's lost protagonist in Frances Ha, and in AHS Gummer embraced the opportunity to look less than perfect and ended the season looking... well, see the picture above.

The legendary singer and actress (who recently had a great cameo in Empire , playing herself) played a concerned maid for the psychotically spoiled Dandy and his submissive mother in Freak Show. Also, who can forget her incredibly camp final moments in the show? Incredible.

As if Harris cameo could be anything less than perfection, the all round talent sincerely wowed fans with his portrayal of a chameleon salesman (that's totally a thing) with a weird and deeply unsettling puppet in tow in Freak Show.

So you see, it really isn't that out there an idea for Blanchett to show up in AHS at some point. In fact, she'd be pretty amazing. How about Blanchett for a lead role in Season 6? Let's start that campaign now, people!