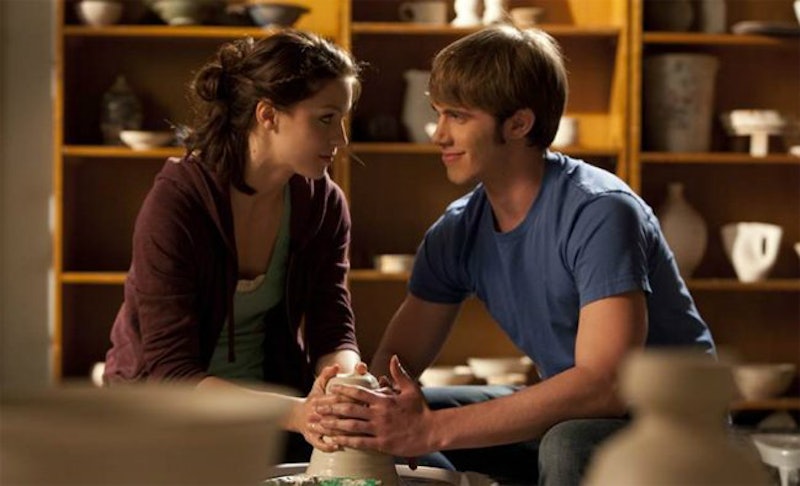 When the original cast of William McKinley High moved on to bigger and better New York things, the new Glee cast was fleshed out by the likes of Melissa Benoist, Jacob Artist, and Blake Jenner. The love triangle between Marley, Jake, and Ryder replaced the early love triangle between Finn, Rachel, and Quinn (with Puck occasionally showing up two hours late with Starbucks to make this party into a love square). For those who didn't know, Marley and Ryder fell in love off-screen and Melissa Benoist married Blake Jenner, so I guess the Ryley fans won this one. However, with the news that Blake Jenner is joining Supergirl in an upcoming role, Glee fans should rejoice whether they were Ryley fans or not. Benoist and Jenner have an adorable off-screen relationship, with natural, sweet chemistry that will hopefully translate onto the screen.

According to TVLine, Jenner will be playing, "Adam Foster, a handsome stranger from Cat Grant’s past whose arrival in National City tests Kara and Cat’s relationship like never before." Apparently, he might also be a potential love interest for Kara Danvers aka Supergirl aka Benoist, and they should turn that "potential" up to a "definite." Oh, don't get me wrong. Like everyone else ever, I am on the edge of my seat hoping that James Olsen shows our girl Kara some love (and that Lucy Lane gets to hang around more and that she and Kara become best crime-fighting friends).

However, Jenner and Benoist have had so many couple moments that I need to see even some of the below cuteness make its way onto the show.

1. When She Announced His Upcoming Role

Ever the supportive wifey.

2. When She Reminded Us That She Loves Him

Not only are they at the pantheon, but her idea of a good throwback Thursday picture is to post one that's mostly of his face and the pantheon. Almost like they're her two treasured memories here.

4. When She Wished Him Happy Birthday

The way the sun is shining down on them makes me think the universe approves of this union.

5. When He Played With Their Nephew

I have a weakness for guys who are good with children, and, clearly, so does Benoist.

6. When She Called Him Her Favorite Person

I have nothing to add.

At least they're not picking each other's noses.

8. When They Went To Rome

Maybe she should have called them Glee-diators.

9. When They Went To An Event Together

Who has that much fun at an awards show? I can't tell if they've had too much champagne and wine, or are just drunk on each other's company.

10. When They Rang In The New Year

And here is to many more years as a couple.

11. When She Wished Him Happy Birthday Again

With a throwback to Glee's adaptation of Grease, and a milestone episode for Ryley 'shippers.

12. When They Were Snowbunnies

Winter, summer, or fall, they are always a good looking couple giving you #relationshipgoals.

I have no idea what's happening here, but I can totally understand from this video alone why Benoist fell in love with Jenner.

I'll cross my fingers that Kara and Adam get some couple time so we can enjoy seeing this chemistry translate itself to the screen. Sorry, James. You had your chance, and your current girlfriend is awesome, so it's about time Kara tries to move on.