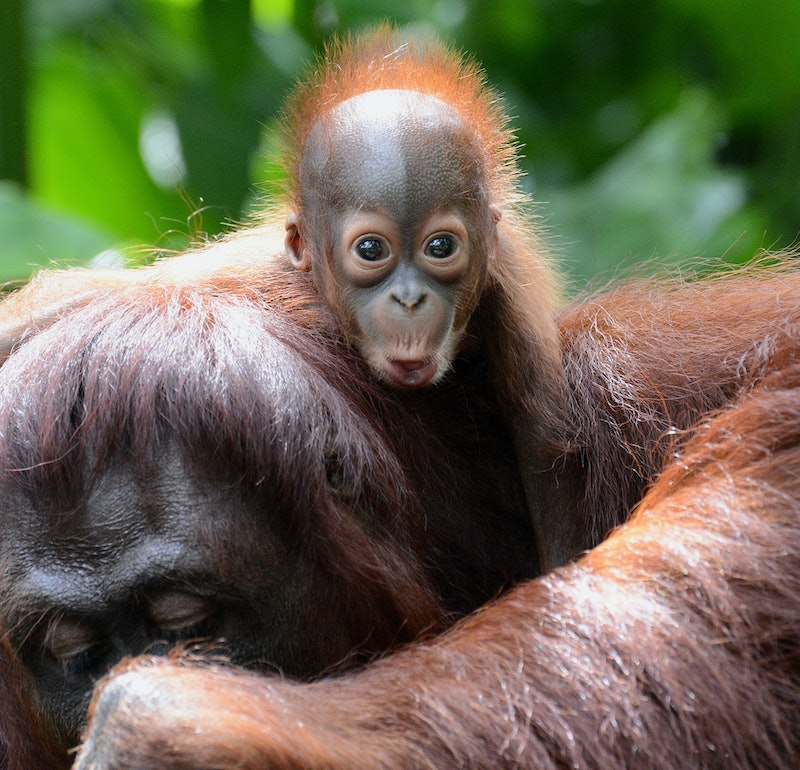 I probably don't need to tell you that, although they're among our most basic biological functions as human beings, conception and pregnancy are basically the closest any of us are ever going to get to actual sorcery. I mean, you take some cells, combine them with some other cells, let them sit for nine months, and somehow, they turn into a human being who will cries and poops, and will eventually think, learn, and complain about social media? It's damn near magical (and also slightly terrifying) to contemplate.

But humans don't have a lock on the magical-yet-terrifying aspects of reproduction. Not by a long shot, buddy. The 11 animal species profiled below all experience conception, pregnancy, and birth in extremely different ways — the only real common factor is that all these animals conceive and birth their young in ways that will pretty much blow your mind. Some of these facts will warm your heart, some will bum you out, and some will make you say, "Go home, Nature, you're drunk" — but all of them will make you reflect on the fact that it is pretty frickin' complex to bring another living thing into this world.

So, are you ready to ruin your next cocktail party by going on and on about duck vaginas? That's the spirit! Then read on, and learn about 11 of the most bizarre, cool, confusing, and all-around interesting reproductive practices in the animal kingdom. Who cares about your dumb cocktail party friends anyway? I'll be your friend now! We can text each other fun facts about marsupial genitals (and trust me, there are many).

1. Elephants Are Pregnant For Nearly 2 Years

Elephants have the longest pregnancies of any mammal — an African elephant stays pregnant for a truly brain-melting 22 months — and when they give birth, their entire pack huddles around them, to protect the mother and baby from predators like lions. Elephant babies are able to walk moments after being born — also likely as a defense against predators who go after baby elephants.

Also, in case you were not yet dying by cuteness today, know that baby elephants suck their trunks, just like human babies suck their thumbs. See? Life isn't completely horrible!

Although the actual facts of dog reproduction are covered very thoroughly in the noted documentary film 101 Dalmatians, dogs do have one unusual reproductive feature that you may not know about: unspayed female dogs sometimes experience false pregnancy.

After a female dog "goes into heat" and experiences a fertile period, even if she has not actually mated, she may experience pregnancy symptoms like vomiting, fluid retention, enlargement of the mammaries, and even milk production. She may also begin engaging in typical pregnancy behaviors, like nesting and feeling restless. On occasion, dogs experiencing a false pregnancy will even go through a false labor, and fixate on a small toy or other item afterwards, protecting and caring for it as if it were a young puppy.

So why do dogs become convinced that they're with pup, even if they haven't been anywhere near a male dog who could impregnate them? Turns out that the female dog's ovaries produce hormones designed to ready the uterus for pregnancy as soon as a dog is finished going into heat. In a pregnant dog, these hormones continue to flow for almost the rest of her pregnancy; for a dog who isn't pregnant, these pregnancy hormones continue to flow through her body for over a month, and their fluctuations lead to pregnancy-like bodily changes. So the next time your dog won't give you back one of your socks, cut her some slack — she may be going through an extremely confusing time.

Orangutans spend almost their entire lives in trees — they're the only great ape to be considered primarily arboreal. They spend their days climbing, traveling, and eating in the trees, and building nests each night high in the forest canopy to sleep — and giving birth is no different. Female orangutans give birth to their young alone, like most apes, in nests built near the tops of some very high rain forest trees.

Female orangutans also devote seven years to raising each of their babies, who nurse until they are six — which is why they typically only give birth once every eight years, meaning that most orangutans only have four or five children in their lifetimes. That's the longest any animal (besides the human animal) spends raising its young.

4. The 6-Foot Drop Of Being Born Is What Severs The Giraffe's Umbilical Cord

Giraffes can only give birth standing up. According to Animal Planet's Growing Up Giraffe, if a giraffe mother were to sit or lie down while giving birth, "the baby could be crushed." The standing birth also serves another function: a newborn baby giraffe drops out of a standing mother's vagina, which is typically about six feet in the air — a drop which severs the umbilical cord.

But while a seated giraffe birth can be risky, so can the drop — on occasion, newborn baby giraffes become fatally injured during their fall to the ground. But most giraffe babies successfully make it to the ground.

5. Spiders Can Choose Which Sperm To Use

Certain species of female spiders are able to engage in a practice called "sperm dumping" — basically, when these spiders mate, sperm doesn't flow directly into their reproductive organs; rather, it enters a sac, which the female spider can decide about later — she'll either expel and dispose of the sperm, or use the sperm to conceive. This system is thought to exist so that these species of female spiders can mate with multiple males during a period of fertility, and then choose the mate most likely to yield successful offspring.

And spiders are far from the only creatures to engage in forms of sperm dumping — mammals like zebra and ducks (more on them below) also have techniques for keeping unwelcome sperm from their wombs.

6. Octopus Mothers Die After After Their Eggs Hatch

Typically, octopus mothers guard their eggs for several months, a period of time where they don't eat or really move — and after their young hatch, the mothers die. Researchers have found one deep sea species of octopus who sat guarding her eggs and barely moving for 4.5 years — the longest documented gestation time for any animal (and also an impressive span of time for an octopus, whose lifespan is typically only a year or two).

Have you ever been so busy and overworked, you were just like, "Man, I wish I had three vaginas!" (You know, just so you could actually get something done.) Well, kangaroos feel you — because female kangaroos have three vaginas. The outer two are for collecting sperm from sexual encounters, while the central vagina is exclusively for giving birth. All the vaginas connect within the kangaroo's body, funneling whatever goes into them to one of the female kangaroo's two uteruses. This setup means that a female kangaroo can basically be constantly pregnant.

And yes, some male kangaroos have a double-pronged penis, too. I'm kind of insulted that you even had to ask!

8. A Chipmunk's Pregnancy Might Be Shorter Than Your Menstrual Cycle

Chipmunks are only pregnant for 31 days, aka the amount of time it probably takes you to decide on a movie to watch on Netflix.

10. Male Dolphins Are Not As Nice As You Think

You may have heard that some dolphins commit sexual assault against each other — and it's true. Male dolphins will sometimes in effect "gang rape" a female dolphin caught alone, preventing her attempts to escape until she has sex with all of them.

But that's far from the only sex-related problem to plague the dolphin communities of the world. The heft of carrying a pregnancy slows dolphins down — a pregnant dolphin experiences a 50 percent increase in swim drag, which can make them more vulnerable to predators, and may play a role in declining dolphin populations.

After some courtship, the female seahorse lays eggs in the male seahorse's pouch. The male seahorse is then pregnant — and he doesn't just carry the eggs around. He also provides nutrients and protection from viruses to his young while they're in utero, just like your typical pregnant female mammal does.

Then, he'll give birth to the couple's young after 10 to 25 days (depending on the species). Did you already know this? I personally learned it from a Nirvana t-shirt that I had in eighth grade, but I've always liked to bring it up at parties.

Anyway, if you're curious about what it looks like when male seahorses give birth, please check out this extremely NSFW gif (it's a little gross, so consider yourself warned).

If you're a student of unusual animal genitalia — and who among us isn't, really? — you may have already heard about ducks and their mind-blowingly complex junk. But in case you haven't: male ducks have sort of spring-loaded corkscrew-shaped penises, which emerge from inside their bodies when they prepare to have sex.

Female ducks have corkscrew-shaped vaginas, which seems quite reasonable in this context. They also have the ability to prevent the sperm of male ducks whose children they don't want to bear from reaching their uteruses —they can shunt this unwanted sperm off to a "dead end" within their vagina, where it won't be able to fertilize their eggs. This ability is really important for female ducks, as male ducks are known to frequently force themselves sexually on female ducks.

Oh, and also, male ducks grow a new penis every year. As the old public service announcement ad used to say, the more you know (the happier you are that you're not a duck)?

More like this
How To Do The Intimacy-Boosting Lotus Sex Position
By Laken Howard and Lexi Inks
The Best Time To Date After A Breakup, According To Experts
By Bustle Editors
Jennifer Coolidge Got A Lot Of “Action” Thanks To 'American Pie'
By Catharina Cheung
Expert Tips For Being On Top When You're Plus-Size
By Lexi Inks
Get Even More From Bustle — Sign Up For The Newsletter