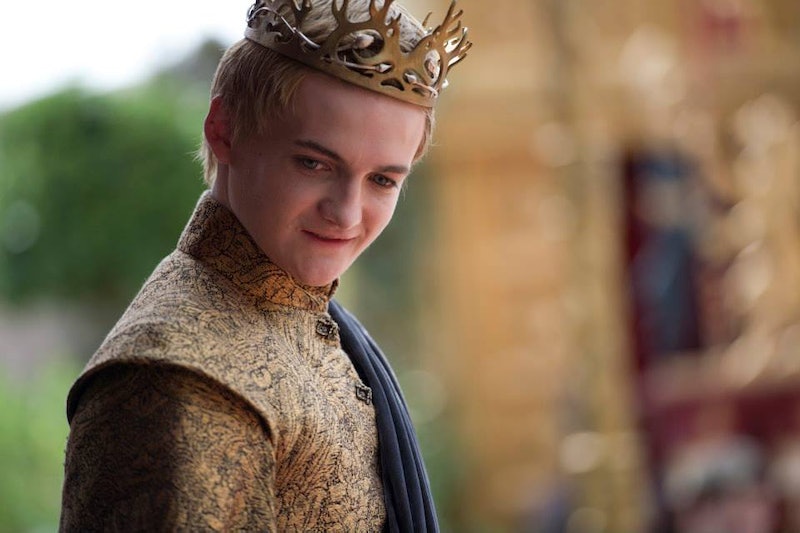 Fans have been waiting with baited breath for the Game of Thrones Season 4 trailers since well, the moment Season 3 ended. So when the trailer came out, full of dramatic spectacularity and wintryness and our favorite families, it was extremely exciting. But then, there's that split second in the trailer that shows Margaery bent over all nakey-like and it hit me like a lighting bolt: We are going to have to see King Joffrey have sex.

And as we well know (and love most of the time, let's be honest) Game of Thrones doesn't exactly favor subtle panning or softly lit kisses. Hell no, it's going to be all naked and gross and I bet his sex-face is a pained sneer, which is the face I'm making right now imagining how grossed out I'm going to be. King Joffrey is going to get to sex up Margaery, even though he's despicable and awful and did I mention DESPICABLE.

I'm going to make a neat and tidy hate-filled list of all the reasons King Joffrey's inevitable sex scene is going to make us vom in our mouths and consider celibacy. Because it will, beyond a shadow of a doubt, incur both of those things, and the only question is when, or really, how many times.

1) He's just really, really genuinely awful. We all hate him, and characters we hate as much as the world hates Joffrey should not get to be straddled by intelligent, awesome, and sexy ladies like Margaery. It's just wrong. I'd throw my hands toward the sky and scream "is there no justice in this world?!?!" but ya know, the Red Wedding already happened so we know there isn't. Ugh.

2) HE FUCKING SHOT ROSSLYN WITH A CROSS BOW. Like, he got a cross bow as a present, wanted to test it out, like many little boys do when they receive a new toy, and he used to to nail a prostitute to his bed frame and not in the fun way, either. Honestly, who does that. Who.

3) Has he even hit puberty yet? Seriously, ain't nobody getting pregnant if his balls haven't dropped yet, and that's a medical fact.

4) He is made of incestuous sperm. If the Lannisters struggle to accept Tyrion in the family due to his stature, imagine how they're gonna feel about the three eared, six toed cyclops baby Joffrey is bound to create because he is made of brother-sister love, and that doesn't exactly make for awesome recombinant genes.

5) Because he gon' dieeeee, right? Honestly, between Daenerys's dragons and that creepy-ass Red Woman, he is for sure, 500 percent going to die by the weight of his own weak DNA, if something else doesn't get to him first. I'd put money on it.