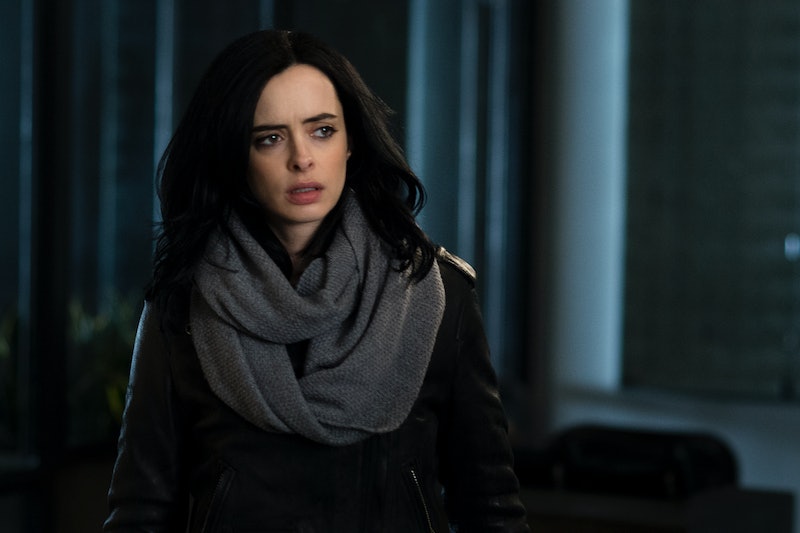 If there's one thing every superhero has in common, it's sharing a tragic backstory. It doesn't matter what capabilities they possess or where they got them from, every single one of them has a past that's plagued with sadness. In fact, it's usually what motivates them to use their powers for the greater good, and Netflix's newest Marvel series Jessica Jones is no different. Like many vigilantes before her, Jessica's powers came at a hefty price — one that no child should ever have to pay. And, ironically, it all started with a free family trip to Disneyland, courtesy of Tony Stark. (Jessica's father was an employee of Stark Industries at the time.)

However, the happiest place on earth quickly turned into Jessica's worst nightmare when their car accidentally crashed into a military convoy on the drive back home. Jessica, unfortunately, was the only survivor and ended up in a coma for several months. But, of course, it turned out that this wasn't just any military convoy that their car hit — it was one that was carrying a bunch of radioactive chemicals. And guess what happens when someone is overly exposed to such dangerous materials? They develop a few rather unnatural capabilities, which is exactly what Jessica realized once she woke up from her comatose slumber.

Not only did this radiation arm Jessica with superhuman strength, but it also made her extremely durable (meaning that she can withstand more than her fair share of hits in a battle) and gave her the ability to fly, though the latter power ended up becoming dormant over time. But while all of this may seem pretty cool to an outsider, it's important to remember all that Jessica lost in order to get it. She lost her entire family in the blink of an eye. No amount of superpowers can ever make up for that fact.

Right now it's unclear how far this Netflix version will choose to stray from its comic book origins. Maybe in this version, her family will be coming back from a trip to the zoo rather than Disneyland. But regardless of the exact details, the premise of her backstory should remain the same. Like I said, tragedy seems to be an unfortunate prerequisite when it comes to transforming into a superhero more often than not. Bruce Wayne lost his parents, which paved the way for him to eventually become Batman; Peter Parker experienced a similar devastating blow when his Uncle Ben was killed; and don't even get me started on Bruce Banner, who knows all too well the side effects that can come from an overexposure of radiation.

But just like her predecessors, Jessica has chosen to make the best out of a bad situation by using her powers to save as many lives as she can. She may not be able to change what happened in her past, but she can certainly beat the heck out of anyone who tries to mess with her future.