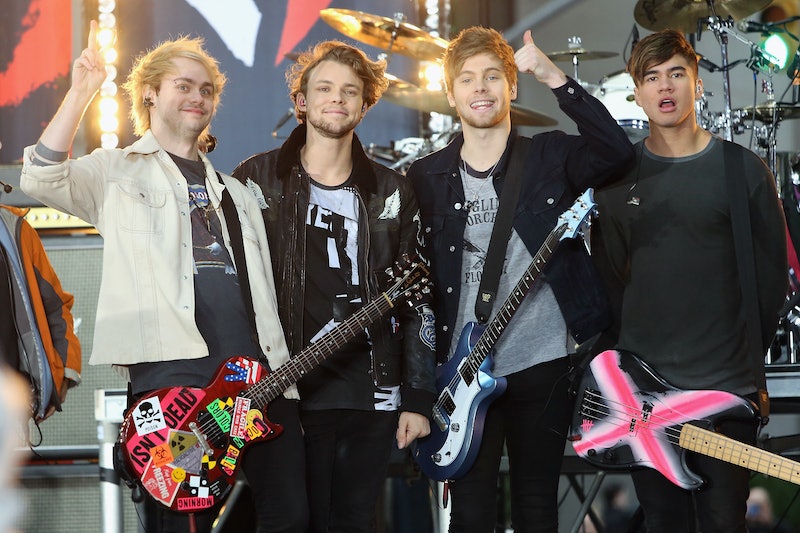 5 Seconds of Summer is set to take the stage at the 2015 American Music Awards this Sunday, which means that every lucky attendee will subsequently become a hardcore 5SOS stan in the process. (It happens.) While I'll be busy reconciling the twin emotions of envy at everyone who gets to witness the badassery that is 5SOS live and the sheer elation that comes from witnessing a 5SOS show even if it is just on my TV, I'll also be joining the rest of the fandom in asking the question, "What will 5SOS perform at the 2015 AMAs?" and hoping beyond hope that it'll be "Jet Black Heart." DO IT, BOYS.

Not only is the dark track an obvious standout on Sounds Good Feels Good right from first listen, the guys recently revealed that it is their next single — an announcement that I've been waiting for pretty much since birth. I could wax poetic about this song for a solid year (and there's evidence of that right here), so instead I'll just go with the fact that it just makes so much sense that they would perform it at the AMAs. It is the the guitar-heavy, Michael Clifford-on-lead new single, it is entirely representative of 5SOS' sound, and it is straight electric when the band performs it live. 5SOS would bring the mother-effin' AMAs house down if they performed "Jet Black Heart."

When the guys performed at the 2014 AMAs, instead of going with "She Looks So Perfect" or "Amnesia," the two singles the band frequently performed at the time, they instead opted for their insanely energetic cover of "What I Like About You," one that has since become a staple both on tour and at award shows.

"What I Like About You" was obviously the perfect choice for the AMAs, with Clifford, Luke Hemmings, Ashton Irwin, and Calum Hood feeding their performance with such passion and unrelenting energy that they were practically bouncing off the walls. There's a reason that the band usually closes their shows with this cover, and it's because there is literally nothing that gets the crowd going more than four crazy talented dudes pouring their heart and soul into a addictive shake-your-ass song, coupled with a performance that demands marathon runner-levels of energy. Also please note Hemmings' high-pitched "you"s.

Though I wouldn't exactly be surprised if the band went with "She's Kinda Hot" or "Hey Everybody" for their AMAs set this year (since "Hey Everybody" was the new single at the time of their performance announcement, the people behind the AMAs Twitter definitely werked those puns), I'm just gonna put it out there: The AMAs need "Jet Black Heart." The fans need "Jet Black Heart." It's the new single. It all makes sense.