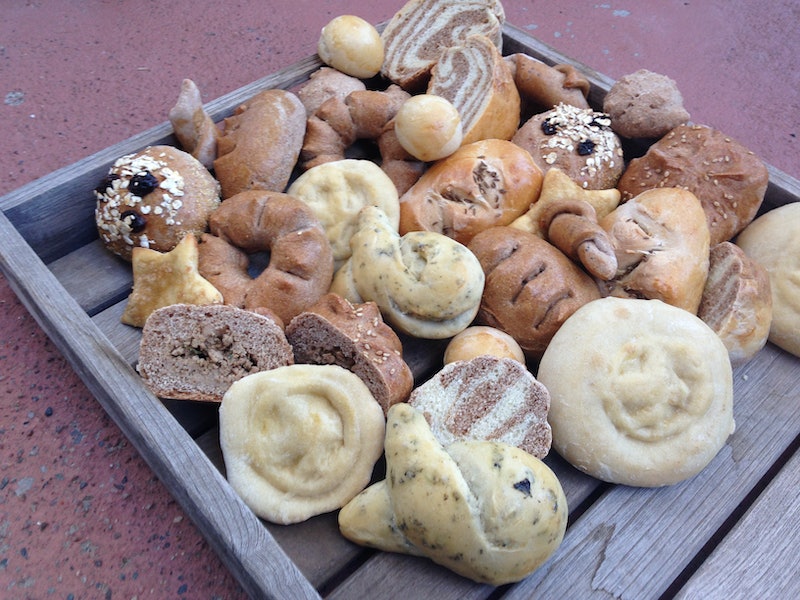 You'd be hard-pressed to find a book series more obsessed with bread than The Hunger Games. I mean, the name of the country, Panem, means "bread" in Latin. But, what I find most fascinating about the food of choice is how each Hunger Games district has its own bread, which is unique to the region. District 4, the fishing district, has fish-shaped bread speckled with seaweed. District 12, the coal district, has rough, dark rolls that kind of look like the product they mine. With Mockingjay, Part 2 finally hitting theaters, I thought there was no better way to celebrate the districts rebelling against the capitol than by bringing their special food to life. Here's how to make the bread from The Hunger Games' districts — and it's actually way easier than you might think.

I'm no Peeta, OK? Before this week I have made bread exactly zero times in my life. I wasn't even a huge bread fan until I read The Hunger Games. But these books make hearty, grain-filled bread sound like cake. So, I stopped taking my ability to buy loaves for granted and started to actually eat it every once in awhile. It was only a matter of time before I made some from scratch. Here's the thing about the books, though, they only actually tell you the types of bread for Districts 3, 4, 11, and 12. So, I had to invent a little with the other eight districts. But, using the fact that Suzanne Collins takes the districts' exports pretty literally when transferring it to food, it wasn't too difficult. And, it was actually kind of fun. Plus, the recipes are super simple. I know because I only messed a couple loaves up out of 12, which means the odds were in my favor. So, if you, too, want to channel your inner Peeta, here's how to make his fav food.

I decided to make one batch of white bread and one batch of wheat bread, so then for each of the districts I could shape or add ingredients accordingly. For white bread, I used this basic homemade bread recipe and let it rise for an hour until it was ready to be split into sections and divided amongst the six district breads I made out of white dough.

I figured most of the poorer, non-Career districts (the higher-numbered districts, apparently) would have less access to refined flour and would have darker breads. So, I used this homemade whole wheat bread recipe for the other six breads. It takes about three total hours for this bread to rise, so I recommend making it first and then doing the white bread and all the white district breads while you wait for the wheat to rise.

I made pretty small versions of all the breads since I was making so many, but the below ingredients are for full sized loaves. If you want to make smaller versions, adjust accordingly. Most of the ingredients are add-to-taste, so it's hard to mess up, don't worry. In addition to everything you needed to make the two breads (the ingredients of which you'll find in the links to their recipes in the above sections), you'll need:

Edible glitter (or turbinado sugar) to sprinkle on top

Although each district bread is shaped differently, the bake times are similar for each. After adding extra ingredients and shaping, let each district loaf rise for an additional 15 minutes. Then brush with egg wash, unless otherwise noted. Cook at 375 degrees at 22-25 minutes for white bread and 25-30 minutes for wheat (or until golden brown). Cook times may vary the larger or smaller the loaves. Mine were on the smaller side, so if you make larger ones, they may require more cook time. Here's a helpful guide on telling how bread is done.

Unfortunately we don't know the canon version of this bread, so I improvised a bit. We know that District 1 is a pretty wealthy area of Panem responsible for producing luxury items for the Capitol. Their children get names like Glimmer, so I figured a luxurious shape (a star) topped with edible sugar glitter captured this district well. I took small balls of the white dough and rolled them out with a rolling pin before cutting out star shapes with a star cookie cutter.

Then I topped them with the closest thing I had to edible glitter: Turbinado sugar. You can actually buy edible glitter, though, if you're feeling super fancy. I would maybe knead that in throughout the dough for a real sparkle effect if I did this again.

The masonry district is where peacekeepers come from and are generally seen as very tough and strong. I decided to make rock-shaped breads out of the wheat bread (because soldiers don't care if they're eating fancy flour) and kneaded in raisins and oats to fortify the bread and make it "stronger." Then I rolled the bottom in cornmeal and topped with more raisins and oats.

Ah, finally a district whose bread we were told about. In Catching Fire we learn that the technology District has "bite-sized, square shaped rolls." Get it? Like pixels, because technology. Guess what's hard to make square? Bread. I suppose I could have cut the rolls into a harsher square shape, but I quite like how adorable and bite-sized these are. Even if they are plain. I just took small quarter-size dollops of white bread and shaped them into squares before they sadly baked out of their shape, sigh.

This is Finnick's district so we learn a lot about his bread. Also this was my favorite bread to make and look at. It's straight-up adorable, OK? The books describe his bread as "fish-shaped, tinted green with seaweed." So, I took some of the white bread (figuring that 4 is a wealthy district and part of the Career pack, and white bread would help the seaweed stand out) and kneaded in two small crumbled sheets of seaweed. You'll just need enough to be seen through the dough. Then I shaped into a fish by rolling out a log of dough:

And then I crossed the ends over.

I'm obsessed with how they came out because mine looks like it's smiling, and everything. Finnick's district would have the most attractive bread.

And, we're back to making up breads again. District 5 is the electricity one, so I tried making lightning bolts on my bread out of caraway seed.

I shaped small white loaves and took scissors to snip a lightning bolt pattern on top. Then I filled the cuts with the seeds to make them really stand out.

For the transportation district, I channeled their export in the shape of a wheel of bread. I used dark bread because tires are dark and rolled logs of dough (like I did for 4) that I attached at the ends to form a circle. Then I used scissors to snip spokes around the outside.

Johanna's district never gets a bread shoutout, but that's OK because I like my creative version anyway. To represent the lumber district I made marbled bread so the inside looks like the rings of a tree. To create this look you'll need four squares of wheat dough and four squares of white dough. I used two-by-two inch squares, but it doesn't matter as long as everything is the same size. Alternate stacking the squares until they're all on top of each other and take from one end and roll all the pieces together like you're rolling up a scroll. Place on your baking tray seam side down.

The only hint we get about the textiles district is when Katniss meets those two girls in Catching Fire who have run away from 8. They have small, flat cracker-like breads with mockingjay symbols stamped in them. This is likely not everyday bread, but in honor of the Mockingjay, Part 2 rebellion I decided to make it. This one is a little trickier, but I believe in you. I took white dough and rolled small balls out flat. Then I carved the mockingjay symbol onto a potato (like those potato stamps we used to make in elementary school).

I find it's easiest to print out a template like this one and trace it onto the potato before carving it out. Now, bread rises fast so don't stamp the bread until right before you put it in the oven and only brush the mockingjay symbol with egg wash so it'll stand out darker than the rest of the bread. I didn't nail it, but it kinda worked.

I figured the grain district would take their bread pretty seriously and also keep it standard. I made wheat loaves and used scissors to score the top. Easy!

For the livestock district I put meat in the bread. I rolled out wheat balls to flatten them out and then filled them with a spoonful of cooked ground beef. Then I folded each side up into the middle and pressed the pieces together to make sure they were sealed before I baked.

I suppose you could put uncooked beef in and bake the whole thing, but I'm weird about meat and have a fear of food poisoning so I double cooked to be safe.

District 11 is described as such in the books: "It's made of dark ration grain and shaped in a crescent. Sprinkled with seeds" I used the wheat bread, added a spoonful of poppy seeds, kneaded it in, and then rolled it thin and cut into triangles:

Then I rolled them into croissants starting at the wide edge of the triangle and bake!

I never truly understood how horrible District 12 was until I made their bread. In the book Katniss describes it as such: "rough bread made from the tessera grain" and "ugly drop biscuits." So, I chose the wheat bread and took small balls that I pulled pieces off and stuck roughly back together to give them texture. I didn't egg wash them since Katniss called them "ugly" and I doubt they would be shiny. After they cooked they legitimately looked like poop. Poor Katniss. Poor District 12. I hope Peeta re-opened his bakery after the war and started selling bread for the citizens that was affordable and not made of tessera because I wouldn't wish this bread on my worst enemy. OK, I'd wish this bread on President Snow, but that's about it.

See? With a simple dough recipe and few extra ingredients you, too, can be Peeta Mellark — and who better to aspire to be than him, really?