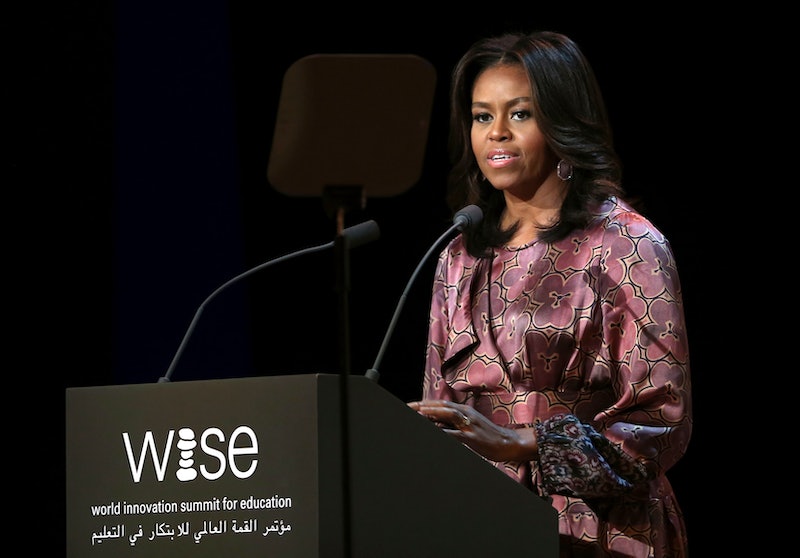 President Obama has instituted plenty of policies that are great for women — hi, free birth control — but he's not the only feminist living in the White House. Michelle Obama has shared plenty of feminist quotes, too, and her words are seriously inspiring for women everywhere. In one of the most recent examples, Obama wrote an essay for The Atlantic earlier this month about Let Girls Learn, the White House's initiative to help educate the 62 million girls around the world who aren't in school. Obama believes the United States has a moral obligation to help girls access education, and she plans to help achieve that goal.

It's clear from her essay that Obama is passionate about helping young girls continue their education, but that's not the only women's rights issue she cares about. Obama has spoken out about everything from the importance of motherhood to her favorite feminist "girl power" playlist. It's obvious she and the president are on the same page about gender equality, and she's got the record to support her statements. " As a first lady, a mother, and a human being, I cannot walk away from these girls, and I plan to keep raising my voice on their behalf for the rest of my life," Obama wrote in The Atlantic. And as these quotes demonstrate, Obama has already raised her voice to support women plenty of times.

"Every mother works hard, and every woman deserves to be respected."

Obama tweeted this in 2012, and it's as true now as it was then. True feminism means supporting women's decisions, even if you don't personally agree with them. Obama is reminding us that whether or not someone chooses to be a mother is no one's decision but her own, and we should respect women's choices either way.

"No country can ever truly flourish if it stifles the potential of its women and deprives itself of the contributions of half of its citizens."

Obama shared this quote in May 2014, when she addressed the class of African fellows who spent six weeks in the United States for the Mandela Washington Fellowship. Obama told the fellows that leadership includes creating opportunities for all people, including women and girls. During the address, Obama also said that "any man who uses his strength to oppress women is a coward, and he is holding back the progress of his family and his country."

"There is no limit to what we, as women, can accomplish."

Obama has said that she encourages her daughters to be whatever they want to be as they grow up. In this 2012 quote, during a speech about the United States having a female president in the future, Obama said that she tells her daughters that "women and girls can do whatever they want." She added that "there is no limit to what we, as women, can accomplish," whether that's in politics or in other fields.

"When girls are educated, their countries become stronger and more prosperous."

Before writing about Let Girls Learn for The Atlantic, Obama was already promoting girls' education across the globe. Obama shared this quote during a 2013 visit to Africa, where she visited an all-girls middle school in Dakar, Senegal.

"As women, we must stand up for each other."

Intersectionality is something that's too often absent from discussions of feminism in America. In a 2009 speech at the State Department Women of Courage Awards, Obama recognized that fact, saying that women need to support each other:

"You don't want to be with a boy who's too stupid to appreciate a smart young woman."

Michelle Obama shared this statement, along with other feminist gems, when addressing young people at the "Power of an Educated Girl" panel at the Apollo Theater in New York this September. Obama also advised teen girls to "beat the boys" by putting time into their educations.

"When you've worked hard, and done well, and walked through that doorway of opportunity, you do not slam it shut behind you. You reach back."

Michelle Obama shared this gem while speaking at the 2012 DNC convention. She again reminded people that feminism isn't just about helping yourself — it's about making sure others have the same opportunities, whatever their gender, race, or socioeconomic status.

It's clear that equal rights are a priority for both President Obama and Michelle Obama. Whatever Michelle Obama does next, whether it's continuing her work with Let Girls Learn or starting a new initiative, it's sure to benefit everyone, especially women.

More like this
24 History-Making Black Women You Probably Didn't Learn About In School
By Ayana Lage and JR Thorpe
25 Inspiring Quotes From Black Women To Celebrate Black History Month
By Kyli Rodriguez-Cayro and JR Thorpe
Twitter Is Identifying With Sally Field & Jane Fonda’s Friendship In New Viral Video
By Jake Viswanath
Watch Jacinda Arden’s Devastatingly Honest Resignation Speech
By Sam Ramsden
Get Even More From Bustle — Sign Up For The Newsletter
From hair trends to relationship advice, our daily newsletter has everything you need to sound like a person who’s on TikTok, even if you aren’t.