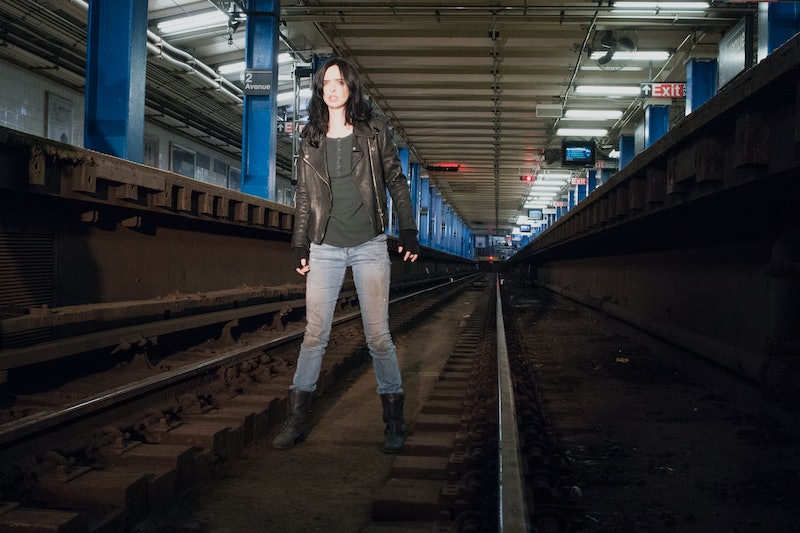 Fly, or jump, to your Netflix account — because Jessica Jones is finally here and it is a Marvel fan's dream. Of course, as with all aspects of the MCU, the connections are half the fun. What Marvel Easter Eggs are in Jessica Jones on Netflix?

Warning, there will be spoilers ahead for the entirety of Jessica Jones Season 1 separated by groups of episodes below. Only read as far as you've watched unless you want to know details!

Daredevil was pretty coy about it's connections to the Marvel Cinematic Universe, which wasn't necessarily a bad thing. The show may exist in the same universe as Agents of S.H.I.E.L.D. and The Avengers, but it has a wildly different tone. It needed to stand out on it's own, and it achieved that. Jessica Jones, on the other hand, is not so coy. They don't dodge the fact that Jones isn't the only person with super powers in the world, and that New York City is still in recovery after it was invaded by aliens in 2012.

There is no mention of S.H.I.E.L.D. or Hydra on the Netflix series. Those are for other heroes to deal with in the Marvel universe. That said, here are all the nods and glimpses that Jessica Jones has to offer, episode by episode.

In the first three episodes, the references to the larger universe that Jessica Jones comes from are few and far between. Jessica visits Metro-General Hospital, where Claire Temple on Daredevil works. When someone witnesses Jessica's powers, they call her "one of them," "gifted" and threatens to expose her to the outside world. Is this setting up the events of Civil War? Later on, Luke Cage calls the Avengers the "big leagues crew" that saved the city.

Bonus: Luke Cage says "sweet Christmas," his comic book catchphrase, in one of the early episodes.

The fourth episode, "AKA 99 Friends," is brimming with references to the first Avengers, specifically. The chitauri invasion is referred to as "the Incident" and both the Hulk and Captain America are nicknamed "The Big Green Guy" and "The Flag Guy," respectively. Without getting too into the details of the episode, there is a lively debate that gets into the reality of a city after superheroes and super villains are done with it.

Also, as per the episode title, the last time she counted, Jessica Jones is aware of 99 gifted individuals in Manhattan alone. I wonder if this was before or after the terrigen "fish pills" incident on Agents of S.H.I.E.L.D. or if Jessica Jones making this up like the laser eyes comment. Later on, you'll also see some kids running around in Avengers costumes.

Bonus: in an Episode 5 flashback, Trish gives her the potential alias Jewel and a mock-up of the super suit from the comics.

The middle episodes are light on Easter eggs, other than an overwhelming sense that Jessica needs a new lawyer. Though we do get the confirmation that Luke's wife was named Reva Connors, who is a comic book character.

In one episode, Jessica makes a side comment about the color purple, which references Kilgrave's comic book alter ego "Purple Man." You can also catch the expected Stan Lee cameo on the wall at the police precinct if you squint. Hogarth mentions that Kilgrave and Hope's aborted fetus is being stored in Hammond Labs, which could be a reference to either Camp Hammond or Jim Hammond, also known as the Human Torch (not to be confused with Johnny Storm). There aren't many direct references to the MCU in these episodes, unless the other kids in Reva's footage are foreshadowing, but there is a possible reference to her comic book origins that include a major Avengers connection. In the flashbacks to the death of Jessica's family and the accident that gave her superpowers, she mentions that they are going on vacation. In the comics, her father worked for Tony Stark and the vacation was a gift from him. Now, it's possible that the timeline has shifted and he would have worked for Howard Stark, but that would still be a major connection!

Mysteries involving Doctor Koslov and the organization IGH could end up becoming Easter Eggs if they reveal themselves to be recognizable Marvel concepts. However, when Claire Temple shows up in the finale, the connections are unavoidable. Her line "guilt makes people do stupid sh*t" in the finale is a direct reference to Daredevil and she even recommends that Jessica go find Matt and talk to him (without revealing his name). Finally, the last scene has a connection that's a little bit abstract, but I'm going with it. At the end, Jessica rejects a bunch of calls from people commissioning her help not as a private investigator, but as a sort of "hero for hire" — which could be foreshadowing the group that many of the Defenders (Luke Cage and Iron Fist, specifically) form in the comics. All in all, I can't wait to see how this world continues to come together when Daredevil returns for Season 2 and Luke Cage premieres on Netflix next year!