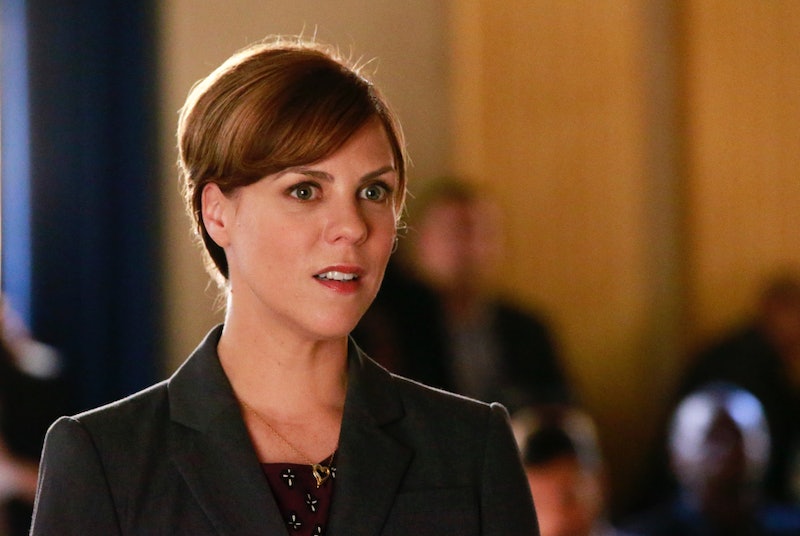 Oh, How To Get Away With Murder. How you toy with us! How you break our will down only to build us back up! For the show’s Season 2 winter finale, things are in dire straits, y’all. We know Annalise was shot (but don’t know who did it ), we know Catherine was drugged by Frank (because, well, Frank), and we know that ADA Emily Sinclair is dead after falling from the Hapstall mansion. But who pushed Emily Sinclair on How To Get Away With Murder ? A few weeks back, there was a flash forward showing Emily falling (and dying obvs) and Bonnie standing beside her, having helped her off the side—or did she?

To be fair, anyone would have pushed Emily off a roof by now. She has been the thorn in Annalise & Company’s side all season long, prosecuting (or trying to) basically everyone who has any relations to Annalise. Nate. Asher. Bonnie. What’s up with that, Emily? You think you just get to wait around until Annalise and her friends do something bad and then slap a warrant in their faces? I don’t think that’s how the legal system works. Really, there was so much drama that Emily couldn’t help herself in trying to find it. She should have quit while she was ahead, but here we are, with her lying on the cold but artfully done brick way of a mega mansion. But that's not how she died.

The truth is that Bonnie showed up to Annalise that flash forward night with Emily Sinclair's dead body in the trunk of her car. She didn't die from a fall, though—Asher ran her over with his car after she told him that his father deserved to die (he committed suicide) for what he did to Tiffany Howard. For a guy that seemed very unlike a sociopath, he sure hit the gas pedal fast. Of course, Asher's first phone call was to Bonnie, who immediately, as "his lawyer" advises him not to take the body to the cops. Annalise has the bright idea to make her death look like an accident (though Connor refuses and decides to leave until she blackmails them all with all the murders and everything). Then, Asher and Bonnie threw her off the roof of the mansion, nearly hitting Michaela and Connor in the process.

I mean, How To Get Away With Murder certainly knows how to shock a gal, but I didn't see this coming at all. Asher has joined the rest of the Keating 5 in murder. Welcome to the club, Millstone!