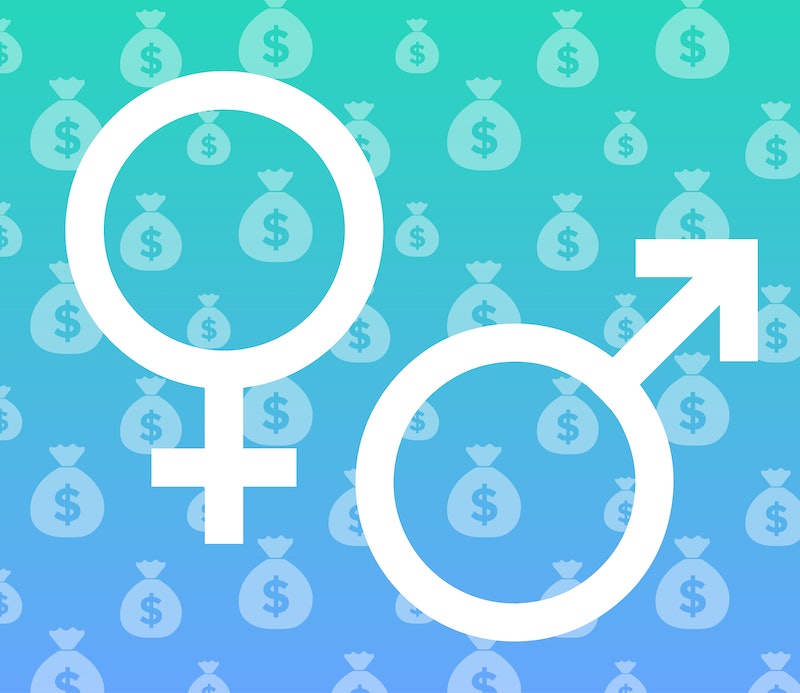 Most of us know by now that white women in the United States make about 79 percent what white men earn — and, furthermore, that this statistic is even more extreme for women of color. But when we talk about general percentages, the difference seems pretty meaningless. So how does the gender wage gap add up over time? A lot, it turns out.

In order to find out what the long-term repercussions of the gender wage gap are, we spoke to Priya Malani at StashWealth about how much money a man and a women at the age of 30 are expected to make over their lifespans — not just in terms of take-home wages, but also in terms of what happens when the difference between those two salaries is invested. According to Malani, an average 30-year-old man (with a salary of $50,000) will earn $11,500 more per year than an average 30-year-old woman (whose salary is only $38,500, because of the wage gap). Over a lifetime of saving for retirement and maintaining a diversified investment portfolio, that makes a huge difference.

“We've all heard the saying, don't put all your eggs in one basket. Diversification is just a fancy word describing a similar philosophy in investing,” Malani explains. “It's good to spread your risk … so when you invest, it's best to buy broad exposure to the market so that you hope to always have some winners and losers in your portfolio.” Furthermore, although “past performance is not an indication of future performance,” Malani also tells Bustle, “When you have a well-diversified portfolio of equities, fixed income, and some alternative asset classes (like real estate, currencies, and commodities like gold), it has historically grown between seven and 12 percent a year.”

So, when you're working with $11,500 more in that diversified portfolio than someone else? Unfortunately, the difference is incredible. Like, seven figures incredible. Like, buy an apartment in New York City incredible, because that average man will bring in almost $2 million more over the course of a lifetime than that average woman will. Being born a man is the best lottery you can win, apparently.

Just to drive home how insane this disparity is, we made a graphic illustrating it all. Take a look: