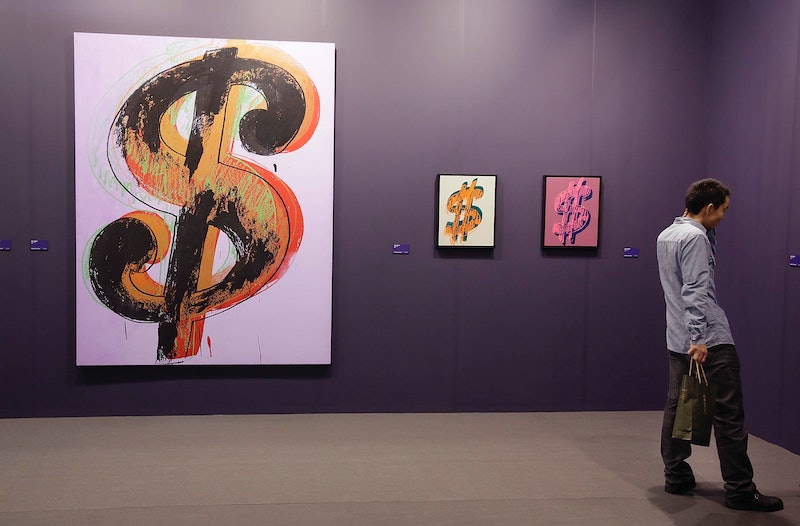 The gender pay gap is even worse than you thought. Popular, oft-quoted figures claim that women make 78 to 79 cents to the dollar a man makes, according to the American Association of University Women, but that number is actually just an average that compares women, overall, to their comparable male counterparts. A new report by PayScale, a compensation data analysis company, found that the gender pay gap is worse in certain industries or demographics, such as between married men with children and equally qualified married women with children and in industries like oil and gas extraction.

The PayScale Gender Pay Gap report "examines the difference in median earnings of men and women overall, as well as by marital and family status, across industry, job family, degree level, generation, management status, job level, state, and metropolitan statistical area," according to a PayScale press release. This means that the organization used a compensation algorithm to determine the percent pay difference between men and women of similar stature — this percentage was called the controlled gender pay gap.

The controlled gender pay gap shows the gap between men and women of similar job status in the same industry or demographic. Compensable factors are things that might increase a person's income, such as experience, degree level, hours worked, location, etc. If there's a high controlled gender pay gap, that's pretty bad, because it means that women are being paid much less than their relatively equal male counterparts, even though they have similar compensable factors. The data was collected between July 2013 and July 2015 through a PayScale survey submitted by 1.4 million full-time employees. Here are six of the most notable aspects of the report.

There Isn't An Industry Where Women Make More Money

Yeah, this is a pretty sad but expected finding. Further, the report found that there isn't even an industry where women make equal to men, even when other factors are controlled for and the women have just as much experience or similar skill sets.

Being Married With Children Is Great For Men

Both the controlled and uncontrolled gender pay gaps (one that doesn't account for those compensable factors like experience) are higher between married men with children and married women with children than in any other demographic group. But the most troubling information that comes out of this portion of the report is that married men with children have the highest overall salaries, with a median salary of $67,900, while single mothers have the lowest overall salaries, with a median salary of $45,500, when they are similar in experience, management level, etc., and should probably making similar amounts of money.

So, not only will being male get you ahead, but it will get you ahead even more if you are married and have kids. And, if you put your family and home life first, as a man, it is much less likely to affect your pay or status at work, the report found. The more that women told PayScale that they prioritize home and family over their work, "the larger the controlled gender pay gap becomes, even when compared to men with similar characteristics who say they prioritize home/family over work with the same frequency," according to the report.

Those kinds of jobs are sure to pay much differently. But the fact that there aren't more women in higher paying jobs highlights less of a pay discrepancy issue and more of an issue with the fact that women aren't invited into fields like engineering when they're young. The hashtag #ILookLikeAnEngineer, for example, began when platform engineer Isis Wenger appeared in an ad campaign for her employer, OneLogin, and received a slew of sexist comments saying things like "there's no way" someone that attractive is actually an engineer. Women who enter fields like science and engineering face sexism, among other barriers. The difference in common jobs for men and women and what they pay highlighted by the PayScale report shows just how that sexism is translating into real effects for men and women.

The Better The Job, The Higher The Pay Gap

This isn't technically new information, but it's still disturbing. PayScale found that men in the mining, quarrying, and oil and gas extraction industry make 5.4 percent more when compensable factors, like experience and degree level, are included, and 25.3 percent more when those factors aren't accounted for. The mining, oil, and gas industry has the largest controlled industry pay gap, according to PayScale. Though PayScale didn't specify just why that is, it could be because male-dominated industries often employ 25 percent or fewer women, according to Catalyst, a nonprofit focused on "expand [ing] opportunities for women and business".

Legal occupations see the highest gender pay gap not controlled for compensable factors, like experience, degree level, or location, at 38.6 percent. PayScale pointed out that this is pretty striking, considering 68 percent of people who work under the umbrella "legal occupations" are female. But, it's important to note that this field also includes legal support workers, according to PayScale:

It is likely that the pay gap stems from women dominating lower-paid support positions, while men dominate higher-paying jobs in the legal field.

This should be troubling — that women seem to fall into these lower positions — and should be indicative of other necessary changes in the movement for gender equality. There are also other reports that show that female lawyers can have more experience and can put in more work than the men at their firms, but are still paid less, according to Think Progress.

PayScale found that, among all jobs, men's salaries continue to increase until they are about 50 to 55 years old. The median salary for these topped out men was $75,000. Women, in general, usually stop seeing pay increases between 35 and 40, and their median salaries at that age were $49,000, according to PayScale.

The gender pay gap is just one symptom of gender inequality, and it varies and worsens across demographics — like race — industries, and states. It's clear that if we don't address the problem — or don't close the pay gap before women are projected to have parity in 2059 — then women will continue to feel both the economic, social, and psychological effects of this inequality.

More like this
I'm A Shopping Editor & These Cheap Things Will Make Your Home Seem So Much More Expensive
By Sara Brown-Rigoli
What Is Julia Haart’s Net Worth? The My Unorthodox Life Star Is A Shoe Mogul
By Radhika Menon
Rita Ora’s Empire Is Fifty Shades Of Impressive
By Darshita Goyal
Mike Tindall’s High Earnings Amount To A Royal Flush
By Darshita Goyal
Get Even More From Bustle — Sign Up For The Newsletter