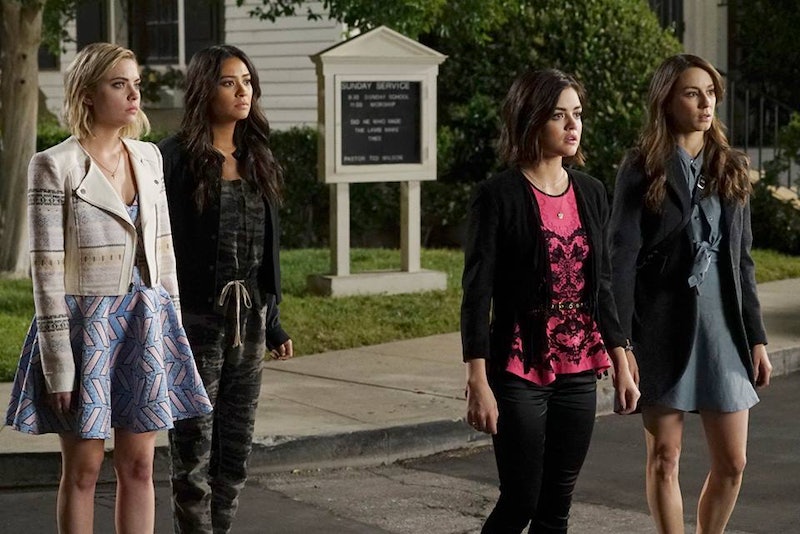 Has your stress level finally come down from the first half of Pretty Little Liars Season 6? If you've finally accepted that CeCe Drake, aka Charlotte DiLaurentis, is A and that Sara is both Red Coat and Black Widow, then you may be ready for what's ahead, which (yay!) is even more Pretty Little Liars. The second half of Season 6 will be very different from the first, as it takes place five years into the future, when the Liars are no longer high school students, but women who have put their troubled history in Rosewood aside to explore the world. Of course, while the Liars have lived years without A watching their every move, their return to Rosewood likely won't be so pleasant. In fact, there are already hints that there's trouble to come. The PLL Season 6B premiere is titled "Of Late I Think Of Rosewood," and it could be a clue that the Liars are headed for more danger and mystery than ever before.

If the title of the premiere episode sounds familiar, you might be a fan of a certain science fiction program. "Of Late I Think Of Rosewood" is eerily similar to that of the Twilight Zone episode "Of Late I Think Of Cliffordville," which aired in 1963. The premise of that episode is rather dark, but then again, so are most Twilight Zone episodes. It focuses on a man who makes a deal with the devil to "redo" his life again, only to find that his past isn't quite as rosy as he remembered it. Due to his hubris and belief that he is able to change fate in his favor, the man actually ends up suffering when he begs the devil to bring him back to the future, due to the mistakes he made in his past.

You can watch the entire episode below:

So what could the title mean for the Liars? It's interesting that this episode of the Twilight Zone is the one that the writers chose to reference, especially considering the promos hint that the girls will make some sort of "deal" in the premiere. According to the Season 6B promo, the girls return to Rosewood because Alison asks them to tell the court that they aren't afraid of Charlotte, which will allow her to leave the mental institution where she's spent the last five years. It also seems like there could be something else that the girls have lied about — perhaps something from their past that continues to haunt them:

Could the "devil's deal" the girls make have to do with lying about Charlotte, or could it be something even darker? Unfortunately, we're going to have to wait until January for that answer. That's too bad, because of late all I can think of is new episodes of Pretty Little Liars. To hold you over until Season 6B premieres, check out Bustle's podcast Taking This One To The Grave below.