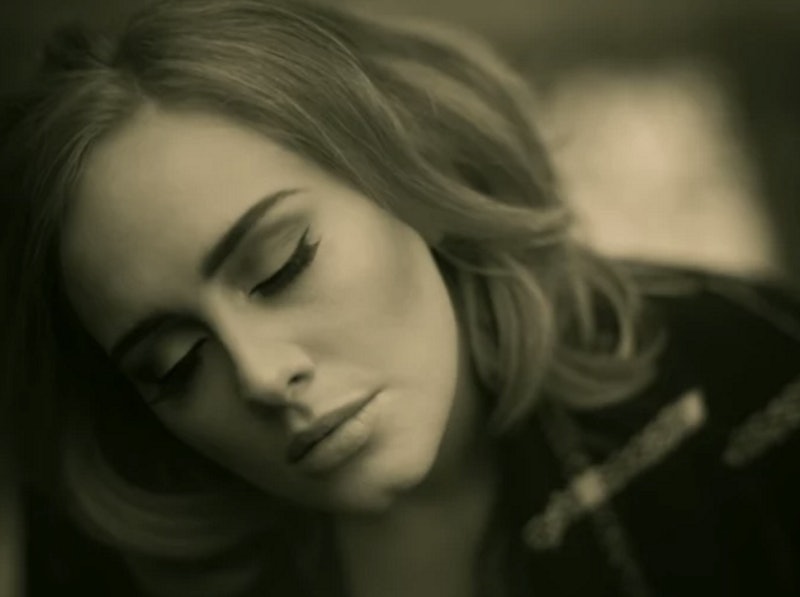 I don't know about you, but I, for one, stocked up on tissues in the week leading up to the release of Adele's 25, because I knew there was no way that I could get through an Adele album without sobbing. Whether it's because it's her first album in four years, or because all the songs on it hit me right in the feels, I was prepared to flood the world with some tears when the sun rose on Friday. And I was not disappointed. There are so many heartbreaking lyrics on Adele's 25 that it can be hard to know what will make you cry the hardest. Adele is very good at reaching into the depths of her own soul and laying her thoughts, emotions, and trials bare for all of us to empathize with and relate to. Whether the song is oddly upbeat in tempo or as heartbreakingly soft and sad as the corresponding lyrics are, 25 is going to break your heart.

Naturally, I took it upon myself to round up some of those heartbreaking lyrics. It will either give you a good idea of what you're getting into before you ever even listen to the album, or it will remind you of all those times you found yourself having to discreetly wipe at your eyes before you could finish the whole album. One way or another, you will cry at some point between "Hello" and "Sweetest Devotion." Check out 13 of the most heartbreaking lyrics on the album below.

That is the most depressing way to say you feel like a shadow of yourself that I have ever heard.

Excuse me while I become immediately paranoid of every breakup I ever have in the future.

I think we've all been here. Heck, "Hello" is probably one of the most relatable songs on the whole album.

4. "Sometimes I just feel it's only me who never became who they thought they'd be." —"Million Years Ago"

It definitely wasn't only you, Adele. This is such a song for millennials, because I think we all had bigger dreams than the world after college allowed for.

The fact that she's pointing out that there's a huge difference between those two words is so real. I can't.

This lyric just hits me straight in the gut, imagining a couple that can only be amorous when the sun goes down because they're from two different worlds in the light of day.

8. "A part of me keeps holding on, just in case it hasn't gone. I guess I still care. Do you still care?" —"When We Were Young"

This uncertainty is the kind of thing that would give me anxiety for weeks.

9. "Have I ever asked for much? The only thing that I want is your love." —"Water Under The Bridge"

I feel defeated just listening to this lyric.

11. "Consider this my apology. I know it's years in advance, but I'd rather say it now in case I never get the chance." —"River Lea"

Everything about this line makes me want to cry. The expectation she has that she'll mess up, and that the guy might leave before she gets a chance to make it right (see "Hello")? I'm done.

12. "I miss it when life was a party to be thrown, but that was a million years ago." —"Million Years Ago"

I've already discussed how I feel this lyric sums up 25 perfectly, and it remains one of the most heartbreaking lines on the album.

As always, Adele got really real with her fans, and our hearts are breaking as a result. Can someone pass a tissue?