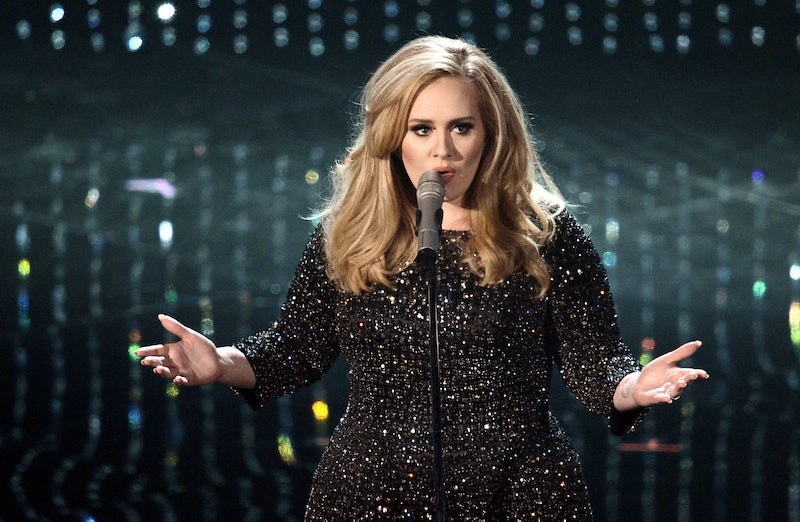 Adele's done it again. Does that really surprise anyone? On Friday, Adele's album 25 was released and now everyone's forgetting all about work and listening to her new music instead and trying to figure out who she's singing about in some of her songs. A majority of the 27-year-old singer's lyrics are beyond heartbreaking (shocking, I know) and make you really think about her past relationships. For example, who is "Love in the Dark" about?

Take your eyes off of me so I can leave / I'm far too ashamed to do it with you watching me / This is never ending we have been here before / But I can't stay this time 'cause I don't love you anymore / Please stay where you are / Don't come any closer / Don't try to change my mind, I'm being cruel to be kind / I can't love you in the dark / It feels like we're oceans apart / There is so much space between us / Maybe we're already defeated

So. Many. Chills. So, just who is she singing about? Clearly, it's about a past and deep love. You don't write and sing a song like this about just some ordinary flight. It has to be about someone she loved immensely at one time and found it hard to walk away from.

As fans know, Adele is very private when it comes to her personal life, save for the few times she's talked about her current boyfriend Simon Konecki, who she's been with since 2011. This song (and possibly a few of her other songs on 25) could be about her alleged former boyfriend photographer Alex Sturrock. In 2012, U.K. tabloid Heat magazine reported that Sturrock was the man responsible for Adele's songs "Rolling in the Deep" and "Someone Like You" from her album 21. Per a source, they dated from 2008 to 2009, but despite it only lasting for about a year, Heat described the relationship as "short and intense and volatile."

If true, I'd say that's enough to write plenty of songs about, even six years later. If she's not writing about him, Adele's song could even be about someone she dated between 2009 and 2011 (before she met Konecki). Heck, there's also a chance it's about someone further back in her past. Whoever this particular ex is who Adele is singing about, it's clear she's moved on. As she told The Guardian in 2015,

It sounds obvious, but I think you only learn to love again when you fall in love again. I'm in that place. My love is deep and true with my man, and that puts me in a position where I can finally reach out a hand to the ex. Let him know I'm over it.

Based on the lyrics, Adele and her mystery man seemed to have grown so much apart that there was no fixing it. When you're feeling like you are loving someone in the dark and can't even save the relationship, sometimes the only thing to do is to walk away. As she sings in "Love in the Dark":

Can we talk about that last line? That is some powerful stuff.

At least Adele's over it and can now express her feelings through her music. Now, excuse me while I go dry my tears, because Adele just has that effect on me.