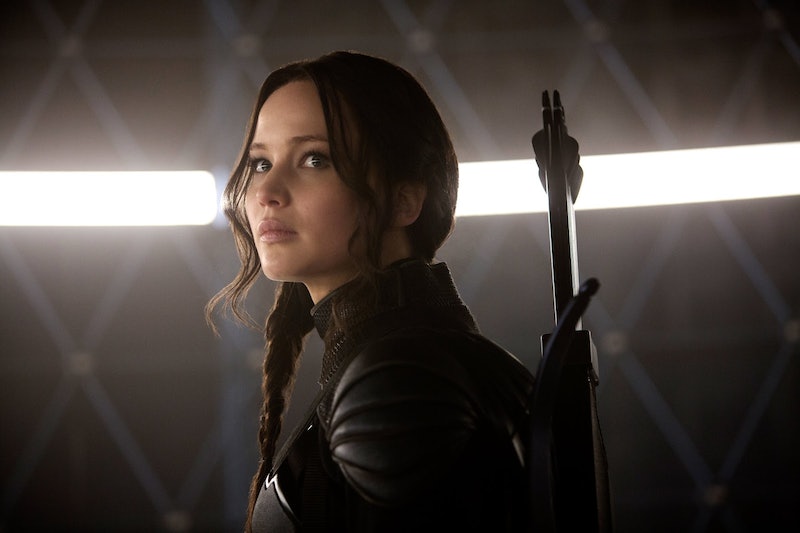 In anticipation of Mockingjay — Part 2's Friday premiere, Suzanne Collins has published her farewell letter to the movie quartet. In a Tuesday Facebook post, the author expressed her gratitude to the cast and crew that have made sure that the Mockingjay movie is faithful to the book. And the other films as well, of course.

She calls director Francis Lawrence, production designer Phil Messina, composer James Howard, and — of course — American Sweetheart Jennifer Lawrence by name, thanking them for their talent and devotion to bringing her book trilogy to the big screen. "I'm thrilled with how this quartet of films, which I find both faithful to the books and innovative in its own right, has been brought to life on the screen," Collins says.

Fans, of course, haven't always shared the author's enthusiasm for the Hunger Games movie adaptations. When The Hunger Games hit theaters in 2012, some readers were outraged that black actors were cast to play Rue, Thresh, and Cinna, despite the fact that Rue and Thresh are both described in Collins' books as having "dark brown skin and eyes," and Cinna's skin is not discussed at all. Jezebel covered that outcry here, but I warn you, the tweets in the article are safe for neither work or your faith in humanity.

Racists aside, the vast majority of Hunger Games fans have been pleased with the four-part movie franchise. CNN notes that "[t]he first three films grossed over $2.3 billion worldwide," and credits the big screen adaptations with increasing Hollywood's interest in YA fiction and "[m]aking money with a message."

The author's letter also hints at what's in store for her career. Prior to the success of the Hunger Games trilogy, Collins wrote the five-part Underland Chronicles. In her farewell, she mentions plans to write a new world. "Having spent the last decade in Panem," Collins writes, "it's time to move on to other lands." Given the themes present in her Gregor and Katniss novels, it's probably safe to assume that she'll give us even more dystopian teen drama and just war theory.

May the odds be ever in her favor.